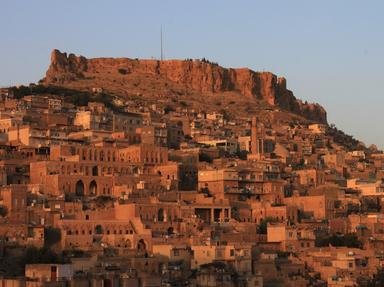 This quiz covers the first civilizations founded in the Ancient Near East during the Bronze Age.

Quiz Answer Key and Fun Facts
1. What are the two elements that combine to form the alloy that results in bronze?

Most Mediterranean civilizations had begn using Bronze for tools and weapons by 2500 B.C., replacing the previous 'copper only' period, which lasted approximately 1,000 years.
2. What does the word "Mesopotamia" mean?


Answer: the land between rivers

Located between the Tigris and the Euphrates rivers, in a fertile crescent of land, Mesopotamia was the middle plains location of the first cities.
3. Which modern country contains most of Mesopotamia?

Some of the ancient cities that can be located in the present day country of Iraq are: Babylon, Ur, Susa, and Assur.
4. Mesopotamia was the first civilization to develop a system of writing. What was it called?

Mesopotamians used clay tablets to write upon. Scribes using sharpened reeds and made wedge shaped marks in the wet clay. These tablets would harden, making a permanent record.
5. There were two major languages spoken by the Bronze Age Mesopotamians. One was Sumerian, the other was ______ .

Akkadian was a Semitic language, related to the Hebrew and Arabic languages.
6. One of the very first pieces of literature comes from Mesopotamia. It told the epic story of the king of Uruk and his peoples. What was its title?


Answer: The Epic of Gilgamesh

The Epic of Gilgamesh tells the story of the king of Uruk and his rise to becoming a king. It tells of the king's relationship between his elders and the more common people of Uruk. It was written ca. 2000-1595 B.C.
7. Who was the first king to unite several Mesopotamian cities under one central government?

An Akkadian, Sargon, united Mesopotamian cities with a new capital called Akkad ca. 2300 B.C.
8. By 1760 B.C. a new ruler again united Southern Mesopotamia, with his capital city located at Babylon. Who was this ruler famous for his code of laws?

Hammurabi's Code deals with a vast range of subjects, from slaves, women, and market values to homicide and witchcraft. Discovered at Susa, the code was inscribed on a stele with a sculpted relief of Hammurabi on it.
9. Slavery was common in ancient Mesopotamia. In what ways were slaves distinguished from the free population?

Royalty, the temples, and wealthy citizians all owned slaves. There were many levels of slavery. Slaves were treated as property. Some slaves could intermarry, own property, or become emancipated. Most slaves were domestic servants.
10. Who were the first Mesopotamian people to consider their empire a complete geographical territory rather than a united group of cities?

The Kassites, ca. 1450-1155 B.C., called their kingdom Babylonia. Little is known about these people who seemed to have came from the Zagros mountain area.
Source: Author stetienne 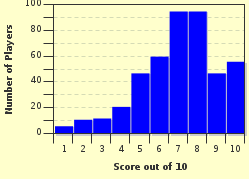 
Other Destinations
Explore Other Quizzes by stetienne