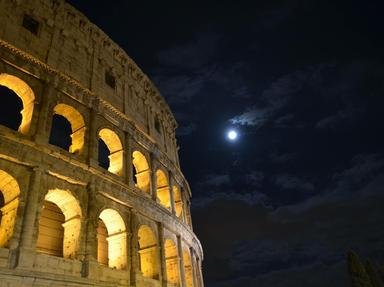 Quiz Answer Key and Fun Facts
1. The construction of the Colosseum began under the rule of which Emperor?

Vespasian reigned between 69 and 79 AD. He helped rebuild Rome after the civil war, adding many sights such as the Temple of Peace and the theatre of Marcellus as well as beginning the construction of the Colosseum.
2. Complete the translation of a famous quote by 8th Century writer Bede: While the Colosseum stands, Rome shall stand; when the Colosseum falls, Rome shall fall; when Rome falls ...


Answer: The world shall fall

Bede was a famous historian and doctor of the Church. He spent most of his time translating Ancient Roman and Greek documents to make them more accessible to fellow Anglo-Saxons. This was just one of many of his amazing quotes.
3. How long was the longest aqueduct in Rome?

There were 11 major aqueducts in Ancient Rome, the longest being Aqua Novus of 59 miles. Interestingly enough, it was located the furthest from the city. It was started by Caligula and its construction was finally finished in the time of Claudius. Remains of the impressive structure can still be seen today.
4. What was special about the Baths of Caracalla?

These baths were the largest in the world when opened in 217AD and functioned for over 300 years. People flocked from all over the Empire to bathe here, but perhaps Caracalla is best known for his decision to offer citizenship to all free inhabitants of the Roman Empire. (However, this was mainly to increase his income from taxes, it must be said!)
5. Who organized the races in the Circus Maximus?

At one time, this fantastic arena held over 250,000 people but sadly there remains hardly anything of the Circus Maximus nowadays. It has now been taken over as a site for dogwalkers and had you not known about the Empire, then you would find it hard to believe it once existed.
6. Why is Monte Testaccio is so important to historians and archaeologists?


Answer: Romans dumped their plates and cups here over time

Yes, thanks to this large human rubbish dump of food waste and crockery, historians have been able to tell a great deal about Roman culture and eating habits. It was once open to tourists but now is considered too much of a health and safety risk, so is kept away from the public's eyes. Testaccio is more commonly known for being the busiest nightlife district in modern Rome.
7. What used to be distributed free of charge in Trajan's markets?

Trajan's markets were large groups of shops which provide us with a living model of life in Rome. Known as 'the world's oldest shopping mall', if tourists enter through Via IV Novembre they will be able to immediately be standing on the area where free wheat was once distributed to the people of Rome
8. What does the Arch of Septimus Severus show?


Answer: Victory over the Parthians

This impressive arch was erected in AD 203 to commemorate the Parthian victories of Emperor Septimius Severus and his two sons, Caracalla and Geta. A flight of steps once originally led to the arch. However, 4th century erosion raised the forum's level so high that traffic began to travel through the arch for the first time, thus slowly making the steps disappear.
9. What happened to the Pantheon in 80 AD?


Answer: It was burnt down

The Pantheon was destroyed along with many other buildings in a huge fire in 80 AD. After Domitian rebuilt it, it burned down again in 110 AD. It did in fact become a church in the 7th century, which meant that it could not be used as a stone quarry, and as a result it is one of the best preserved ancient buildings in Rome. Nowadays, it is known for containing the tombs of some very important Italians - King Vittorio Emanuele and King Umberto I as well as Raphael.
10. Where is Hadrian's Temple situated?

Strangely enough, this building is now the stock exchange! It has kept its ancient facade, yet behind it, it is totally modern. It is certainly a strange but must have been a site to see!
Source: Author superpippa 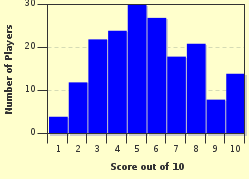 
Other Destinations
Explore Other Quizzes by superpippa