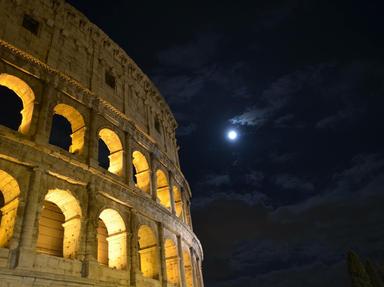 Quick Question
In July 64 AD, which emperor was blamed for indulging in entertainment as a great fire swept Rome?
Sub-Categories With More Roman History Quizzes:

Romulus to the fall of Byzantium

20 questions
Average, 20 Qns, CellarDoor, Jun 29 15
Romans: Romulus to the fall of Byzantium- It would be an understatement to say that the Romans shaped Western civilization. Let's see how much you know about them.
Average
CellarDoor

The Grandeur That Was Rome 10 questions
Average, 10 Qns, --xKIWIx--, Oct 12 10
For many hundreds of years, the Roman Empire encompassed much of the known world, and its leaders wielded power unmatched in modern times. How much do you know of this fascinating era in world history?
Average
--xKIWIx--
6261 plays
6.

10 questions
Average, 10 Qns, eburge, Dec 17 18
Ancient Rome was a fascinating civilisation, with many influential people that are still known today. See if you can remember some titbits about these famous Romans.
Average
eburge

10 questions
Average, 10 Qns, doomed, May 19 10
Roman history is one of fascination and class. This amazing empire has intrigued millions of people throughout time, but what do you know of a world that brought mankind so much?
Average
doomed
4320 plays
10.

10 questions
Average, 10 Qns, agentofchaos, Nov 24 19
Roman emperors tend to have a bad reputation. And to be honest, most of them deserve it. However, this quiz is about a group of exceptional gentlemen who earned the moniker "The Five Good Emperors."
Average
agentofchaos

For Romans, It Was the Best of Times

10 questions
Tough, 10 Qns, daver852, Oct 23 13
The historian Edward Gibbon called it "the period in the history of the world, during which the condition of the human race was most happy and prosperous." What do you know about the Roman Empire from 96 to 180 AD?
Tough
daver852

Roman History, Part II 10 questions
Average, 10 Qns, scipio23, Aug 14 09
This is part two of my Roman Republic Quiz, it covers from basically where the last one left off through Caesar's death. Good luck, or I guess I should say may Fortune favor you!
Average
scipio23
5520 plays
13.

10 questions
Easy, 10 Qns, MEHowe, Jul 11 11
I took a Roman History class in college and found it fascinating. Maybe you find it fascinating too! I hope you enjoy this little quiz.
Easy
MEHowe
2523 plays
14.

10 questions
Tough, 10 Qns, WesleyCrusher, Jun 04 21
In Roman times, entertainment for the masses first and foremost meant the circus games: spectacular, physical displays of prowess that often meant death to those men who did not win. What do you know about these games?
Tough
WesleyCrusher

Enemies of Rome 10 questions
Average, 10 Qns, Zyxzewski, Jan 02 15
Scene from the underwold: 10 shadows of the persons, who once dared to challenge Rome are sitting around the fire, everyone has a story about himself. Your task is simple: just answer one question about each of them.
Average
Zyxzewski
Jan 02 15
4368 plays
16.

The Roman Legions 10 questions
Average, 10 Qns, flem-ish, Feb 25 13
The Roman Legions were not just a formidable fighting machine, they were also an army of roadbuilders, engineers and technicians re-shaping the countries they took under control. Check your knowledge on these elite troops.
Average
flem-ish
4536 plays
18.

Tales of the Grand Tour 5

10 questions
Easy, 10 Qns, ponycargirl, May 31 20
Last summer I had an opportunity to make my own Grand Tour of Rome. It was quite a challenge, as I was only in the city for 36 hours! See if you can identify the ancient sites I visited by following the clues given.
Easy
ponycargirl

Roman Revenge 10 questions
Average, 10 Qns, tazman6619, Oct 21 12
Revenge and intrigue fill the annals of the history of the Roman Empire, beginning with the most notable assassination of all - Julius Caesar. Join me as we look at the subject of vengeance and revenge as seen in this time period.
Average
tazman6619

The Roman Empire 10 questions
Average, 10 Qns, TheBatterie, Jan 20 15
The Romans conquered the entire known world at that time. Let's see how much you know about them.
Average
TheBatterie
Jan 20 15
2019 plays
26.

The Romans 10 questions
Average, 10 Qns, trajancaesar, Aug 19 09
Just a selection of bits of knowledge - pretty hard for an uneducated barbarian I would imagine!
Average
trajancaesar
2091 plays
27.

Last Words of Dying Romans 10 questions
Tough, 10 Qns, muivers, Jul 28 09
This quiz will teach you one thing: prepare your final words NOW, so you can face your death with dignity. Or you might end up like these dead Romans...
Tough
muivers
2646 plays
29.

C Is For Caesar 10 questions
Average, 10 Qns, JanIQ, Nov 06 19
Caesar was at first a nickname for Gaius Julius Caesar, the famed dictator who never became Emperor. But soon it evolved to a title equivalent to Emperor. What do you know about the Roman Emperors whose common name starts with C ?
Average
JanIQ