The Co-operative Republic of Guyana gained independence in 1966; before that, however, it had a long and varied history. What do you know about the history of Guyana?

Quiz Answer Key and Fun Facts
1. When Europeans began to make their way to South America, they found many different groups of indigenous people living there. Which of the following groups of native Americans are NOT indigenous to Guyana?

Historically there are nine groups of indigenous people in Guyana who make up approximately 10% of the country's total population today; their modern descendants are called Amerindians. The divisions of the groups of Amerindians into coastal (Kalihna, Lokono, and Warau) and interior tribes (Akawaio, Arekuna, Patamona, Waiwai, Makushi and Wapishana) is based on language and cultural differences.

While many of the indigenous coastal tribes have intermarried with other ethnic groups in Guyana, such as the Afro-Guyanese, the interior tribes tend to be more separated from other groups because they live in more remote locations.

The overall standard of living of the indigenous tribes is lower than most of the other people who live in Guyana.
2. Located in the northeastern part of South America, Guyana is part of a group of countries that at one time was known as "the Guianas". What does "guiana" mean?


Answer: Land of Many Waters

The area that the Spanish called "Las Guayanas" eventually consisted of three land divisions; the modern countries in the region today are called Guyana, French Guiana, and Suriname. Together they are part of a geographic feature called the Guiana Shield, which consists of the three modern countries, as well as parts of Venezuela, Brazil, and Colombia. Rock formations, called the Guiana Highlands, consist of mountains topped by mesas called tepui, and are part of the landscape; they help create some of the most magnificent waterfalls in the world.

In addition, there are many streams, creeks, and rivers, such as the Orinoco and Amazon, which, of course, have given the country its nickname.
3. Which of the following countries was the first to colonize the modern country called Guyana?

In 1498 Christopher Columbus made his third trip to the New World. While some of his ships took supplies to the settlements on Hispaniola, others explored the area south of the Caribbean islands that had already been claimed. It was during this trip that Columbus and his men stepped foot on the northern coast of South America.

After exploring enough of the area to determine that he had landed on a huge landmass and not another island, he claimed the land for Spain and left, never to return. The Dutch were actually the first to found permanent colonies, with Essequibo in 1616, Berbice in 1627, and Demerara in 1752.

They eventually ceded the land to its next "owner" in the early eighteenth century.
4. Known for ultimately being found guilty of treason and losing his head, who was the first European explorer to describe his travels in the area called Guyana today?

Almost one hundred years after the discovery of South America by Columbus, Sir Walter Raleigh began exploring the region in 1594. Why? He was in search of a city of gold on the Caroní River; the following year he explored further in search of Manoa, the city controlled by the legendary king, El Dorado.

In fact, Raleigh claimed that he found the leader on the Orinoco River in Guyana. He published his discoveries in two books; "The Discoverie of the Large, Rich, and Bewtiful Empyre of Guiana" was published in 1596, while "The Discovery of Guiana, and the Journal of the Second Voyage Thereto" was published in 1606. Of course, these books brought the attention of other countries to the area, and there was a bit of a scramble to see who could take control first.
5. After two brief attempts to rule Guyana in the late 1700s and early 1800s, Guyana became a British united colony called British Guiana in 1831. Which of the following commodities formed the economic base of British Guiana at that time?

Although crops like indigo and rice were also grown, sugar cane was the most important plantation crop grown in British Guiana until the 1880s. Introduced first into the Caribbean by the Dutch, the cultivation of sugar cane relied on slave labor, which greatly changed the culture of the area.

In the 1880s, when the price of sugar cane dropped, other crops also became important, however, the cultivation of sugar cane continued to comprise about half of the exports of the colony through the 1950s.
6. With which neighboring country did Guyana have a long-time land dispute that lasted from 1814-1899?

Great Britain actually formally gained control of Guyana at the London Convention of 1814. Also called the Anglo-Dutch Treaty, the treaty attempted to restore the status quo of most Dutch colonial possessions before the outbreak of the Napoleonic Wars.

Their colonies in Demerara, Essequibo and Berbice were taken by the British, however, the Dutch retained trading rights in the area. Spain, busy with other problems, did not contest the treaty until the British asked for a map of the area to secure the border. Both Venezuela and British Guiana claimed an region at the mouth of the Orinoco River; unable to reach a compromise, the two countries agreed not to occupy the area in question.

The discovery of gold, however, brought the disagreement to the forefront again in the 1850s. Finally, in 1899, a group of two Britons, two Americans, and a Russian ruled that most of the land belonged to British Guiana; in1904 the issue was considered to be resolved.
7. Cuffy is considered today to be one of the national heroes of Guyana. With which of the following events, occurring in 1763, is he associated?

In 1763 Cuffy, also known as Kofi or Koffi, became the leader of a slave revolt in Guyana which is known as the Berbice Slave Uprising. Cuffy had been taken from his home in West Africa and worked as a house slave on the plantation of a copper. Soon after the uprising began, the plantation where Cuffy lived was attacked.

He was accepted as the leader of the group and eventually led about 2,500 slaves in the rebellion, naming himself the Governor of Berbice. A disagreement with his second in command, Akara, led to the formation of two factions of rebel slaves.

When Akara won in a civil war between the slaves, Cuffy committed suicide. In 1970, Republic Day on February 23, the anniversary of the rebellion, was established as a national holiday to honor Cuffy.
8. Georgetown is the chief port and capital of Guyana today. Which of the following statements regarding its history is TRUE?


Answer: The French called it Longchamps.

The British captured a small settlement in the land now called Guyana in 1781; they lost it, however, just a year later to the French, who built the settlement into a capital city called Longchamps. By 1784 the city was captured by the Dutch and renamed Stabroek in honor of Nicholaas Geelvinck, Lord of Stabroek, who was the President of the Dutch West India Company.

It was recaptured by the British in 1812, and named after King George III. The Spanish were interested in colonizing the entire area, however, problems in other colonies kept them away from Georgetown, which was ruled by the Board of Police until 1882.

At that time the city was given official city status during the reign of Queen Victoria. Many sections of the city still bear names relating to its rule by the Dutch and French. Today it has been nicknamed the "Garden City of the Caribbean".
9. Guyana has been involved in a dispute with the neighboring country of Suriname for a number of years. Which of the following best describes the source of their disagreement?

In addition to an on-going land dispute on the border between Guyana and Suriname, there has also been a disagreement concerning territorial waters with potential gas and oil deposits. In 1978 a group of Surinamese trawlers were arrested by Guyanese gunboats; by 1991 the countries had signed a Memorandum of Understanding, or MOU, agreeing to allow the exploration for resources in areas that were claimed by both; Suriname, however, did not ratify the MOU.

In 2007 the United Nations Convention on the Law of the Sea finally settled the dispute by drawing a boundry line that wasn't exactly the same as the ones drawn by either country.
10. After the abolition of slavery in the British empire, which of the following groups immigrated to Guyana and took over the jobs of the former slaves on plantations?

The end of slavery changed the social system and culture in Guyana. The freed slaves, called Afro-Guyanese, left the plantations in need of workers. An attempt, albeit unsuccessful, was made to try to attract Portuguese settlers into the area to work; an estimated 14,000 Chinese workers immigrated into the country from 1853 and 1912.

They, too, did not enjoy working on the plantations. In desperate need of workers, the British government began to use indentured workers from India. Known in Guyana as East Indians, these people had to work for a number of years to pay their indenture.

As of 2012, the descendants of East Indians, called Indo-Guyanese, make up about forty percent of the population of the country.
Source: Author ponycargirl 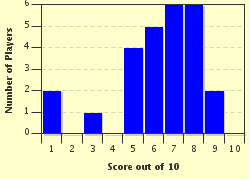 Related Quizzes
This quiz is part of series South America:

These quizzes were written for Week 4 of History Month 2017.