Simply match the 'first' with the appropriate woman.

This was her second attempt at swimming the English Channel, having previously made a failed attempt just under a year earlier.
2. Climb Mount Everest

Japanese mountaineer Junko Tabei survived an avalanche to become the first woman to reach the summit of Mount Everest on 16th May 1975.

Amelia Earhart became the 16th woman to be issued a pilot's license, and made the most of it by becoming the first woman to fly solo across the Atlantic Ocean on 20th May 1932.

She was nicknamed "Lady Lindy" because of her physical resemblance to fellow aviator Charles Lindbergh.
4. Go into space

Born in the Yaroslavl Region of Russia on 6th March 1937, Valentina Tereshkova worked in a textile mill and enjoyed parachuting as a hobby prior to becoming a cosmonaut in the USSR's space program.

She became the first woman to go into space on 16th June 1963.
5. Win an Academy Award (Oscar) for Best Director

Kathryn Bigelow has directed many notable movies, such as "Point Break", "Near Dark", and "Zero Dark Thirty". However, it was her direction of the 2009 war film about an army bomb squad in Iraq, "The Hurt Locker" which won her the 2009 Academy Award for Best Director, thereby making her the first woman to win this award.
6. Be appointed poet laureate of the United States

Born in Waterloo, Iowa on 9th May 1921, Mona Van Duyn won every major American award for poetry, and served as the U.S. Poet Laureate from 1992-1993, the first woman to hold this role.

Mona died of bone cancer on 2nd December 2004 aged 83.
7. Be inducted into the Rock and Roll Hall of Fame

Nicknamed the "Queen Of Soul", multiple Grammy award winner Aretha Franklin has had numerous hits, including her signature song "Respect".

She became the first woman to be inducted into the Rock and Roll Hall of Fame in 1987.
8. Be appointed Speaker of the House of Commons of the UK

Baroness Betty Boothroyd served as Speaker of the House of Commons from 1992 to 2000, the first time a woman had held the post in the House's 700-year history.

Immediately prior to this appoitment, from 1973-1992 she was the Labour Member of Parliament for West Bromwich, and later West Bromwich West.
9. Referee the World Snooker Championship final

Born on 11th December 1967, Michaela Tabb began refereeing professionally on the pool circuit in 1997 before moving on to the professional snooker tour in 2001.

After graduating from Stanford University in 1950 with a bachelor's degree in economics, Sandra Day O'Connor continued at the Stanford Law School and received her Bachelor of Laws in 1952.

In 1981, Ronald Reagan nominated her to the U.S. Supreme Court. She received unanimous Senate approval, and made history as the first woman justice to serve on the nation's highest court.
Source: Author ClarkyB 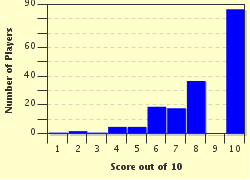 A selection of match quizzes from various categories.


1. A Night at the Movies - American Teen Comedies Average
2. Left or Right Average
3. Let's Go Down To The Arcade Average
4. That's Why We Love ... TV Shows Set In Workplaces Average
5. Sporting Equipment for Kids Very Easy
6. One Word Hits Of 2016 Average
7. Time FOR A Change Very Easy
8. Cities Of The World - Anagrams Easier
9. UK Landmarks Easier
10. US Presidents vs UK Prime Ministers Easier
11. Who Was The First Woman To ...? Easier
12. Track and Field - British Olympic Gold Easier


Other Destinations
Explore Other Quizzes by ClarkyB