Flowers, flowers everywhere, all around the world! I will give you the floral emblem for different countries around the world and all you need to do is guess the name of the flower from the clues given.

Quiz Answer Key and Fun Facts
1. I am the floral emblem for Portugal. I am part of the mint family and can be seen growing freely in Mediterranean countries where I love sunshine and warmth. My purple tipped stems contain highly scented essential oils. What is my name?

Not only does Lavender produce scented products for the beauty market, the flower is also used in culinary preparation. It is included in "Herbes de Provence" along with basil, thyme, fennel and savory, all of which are used in French cooking. Lavender honey, ice cream and cake decorations are available for those with a sweet tooth.
2. I am the floral emblem for Yugoslavia and Finland. My white scented bell shaped flowers seen in shaded woodland look very attractive, but be warned as I am highly poisonous. What am I called?


Answer: Lily of the Valley

Lily of the Valley look highly delicate with their tiny bell shaped flowers, but they are as tough as old boots. Their underground stems, called rhizomes, grow abundantly. Above ground, they prefer cool shaded temperatures under trees where the sun hardly touches. They flower in spring but their glossy leaves remain as ground cover after they have finished flowering.
3. I am the floral emblem for India. I am the most exalted flower in Hindu worship, representing beauty, purity and a symbol of eternal life. What is my name?

The lotus flower resembles a water lily but they belong to a completely different plant family. The lotus is an aquatic plant, with roots planted in a muddy river bottom while the leaves and flower head grow above water. The colours of the lotus range from red, blue, pink, purple through to pure white.
4. I am the floral emblem for Venezuela, Hong Kong and Honduras. I am a very exotic plant which can be found growing on the branches and trunks of trees. I come in a spectrum of colours ranging from pink, white and purple to creamy yellows. What am I called?

Most orchids can be found in the tropical regions of Asia, Southern and Central America. There are 20,000 to 30,000 species growing in the wild and this makes it the biggest variety of flowering plant anywhere in the world. The vanilla orchid native to Mexico is used in cooking as food flavouring.
5. I am the floral emblem for Taiwan. I have scented pink, red or white blossoms and my fruit ripen in the rainy season the Chinese call meiyu, or "plum rain". What is my name?

The common names include Chinese plum, Japanese apricot, winter plum, mume or mei. The blossom, called meihua, starts appearing very early in the year, sometimes when snow is still on the ground. The plum blossom tree has been depicted on Chinese art including the Ming Dynasty from 1368 to 1644. "The Plum Blossom March" written in 1974 is a patriotic song which features the lyrics:

"Plum blossoms, plum blossoms all over the land
The colder it gets, the more it blooms.
The persevering plum blossom symbolizes us
The lofty and great China
Look at how the plum blossom has bloomed
Everywhere, where there is soil, there it is,
It does not fear the freezing snow, wind, or rain,
It is our national flower."
6. I am the floral emblem for Hungary and Turkey. I am a spring flowering bulb and I come in shades of yellow, orange, red, purple, pink and bi-colours. What am I called?

The tulip is better known as the floral emblem for Holland. It is here that the bulb is cultivated in huge tulip fields, with approximately three billion bulbs being grown each year. Although popular in Holland, it was in the former Ottoman Empire that the tulip originated from. The word tulip is a Turkish word for "turban".
7. I am the floral emblem for Spain, Sicily and Slovenia. I have a very sweet smelling scent on my pink, red or white flowers. My alternative name is dianthus. What am I?

The name dianthus comes from the Greek words for "Dios" and "Anthos", meaning "Flower of God". Each colour of flower for dianthus or carnation denotes a different feeling or emotion:

Light red: admiration
Dark red: love
White: pure love
Light pink: mother love
Purple: impulsiveness
Yellow: disappointment
Striped: regret
8. I am the floral emblem for the Czech Republic, Ecuador and Iraq. I have been named after some very famous and beautiful women including Princess Grace of Monaco, Princess Diana and Elizabeth Taylor. What am I called?

The rose is also the floral emblem for Bulgaria, Cyprus, Luxembourg, Slovakia and the United States of America. The Tudor rose is the floral emblem for England. What better way to keep the memory of a person alive than to name a rose after them. It is both timeless and personal. Roses are the most popular plant to give as a gift and different celebrations have been named after them, including "Happy Anniversary", "Just Married", "New Arrival" and "Life Begins at 40".
9. I am the floral emblem for Mexico. I come in a large range of sizes and colours, and my varieties include single, double, cactus and pom-pom. What is my name?

It was not only cocoa that the Aztecs were famous for growing, but also the humble dahlia in the mountainous regions of Mexico. The plant was first bought back to Europe with the return of the Spanish Conquistadors in the 16th century.
10. I am the floral emblem for Russia. I have small daisy like flowers and I can be used to alleviate aches and pains if I am infused in hot water. What am I called?

Chamomile, or camomile, is a ground cover plant which is fast growing and can be used as an alternative to a standard grass lawn. It is springy underneath and it lets off a sweet fragrance when you walk on it.
Source: Author Plodd 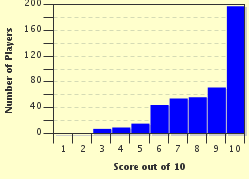 Related Quizzes
1. The Language of Flowers Easier
2. Flowers, Mother Nature's Perfume! Average
3. Alpine Flowers Easier
4. Where Have All The Flowers Gone Easier
5. Which Flower Am I? Average
6. Spring Flowers to Give us Hope Average
7. Nature Imitating Nature Average
8. A Beautiful Winter Garden Average
9. Join Me in My Flower Gardens Average
10. They're All Stars! Average
11. Can I Eat That Garden Plant? Average
12. Perennial Borders Tough