Food and Drink "B" Trivia Quiz

As we proceed through the alphabet here is the second of this series. Good luck.

Quiz Answer Key and Fun Facts
1. What is bagoong?

It is a fermented fish or shrimp condiment used in Hawaii to flavor meat and vegetable dishes, usually eaten raw.
2. Which is not considered a type of bar glass or container?

A jigger is a short squat container, a collins is a cylindrical 12 ounce and a pilsner is a long conical of at least 10 ounces mainly for beer.
3. Which of the following is not a "garden" bean?

The kidney bean is a "field" bean along with the pea or navy bean and the black bean, The oldest domesticated bean dates back to 4000BC.
4. What is balkenbry?

It is a pork loaf cooked and cut in slabs usually served for breakfast. The word is from the Dutch meaning the rafter from which the meat was hung to cure.
5. What part of the animal does primal sirloin come from?

It was set up in New Amsterdam by the Dutch in 1612. Governor Peter Minuit established the first public brewery in 1632.
7. What is billi-bi?

It is a soup made from mussels, cream and seasonings. Its origin is French. It is well known in Normandy by the name mouclade.
8. Of the following what is a bishop?

It is a drink of mulled wine, sugar, spices and citrus fruit. It is red in color and often the citrus fruit is roasted.
9. What is NOT another name for the bowfin?

Also known as a grindle, mudjack, prane bass, speckled cat, scaled king and choupique among others. It is generally considered not good eating.
10. What was Brunswick stew originally made from?

It is now made from chicken or other meats. The squirrel was dropped from most recipes after the turn of the century.
Source: Author steiny1 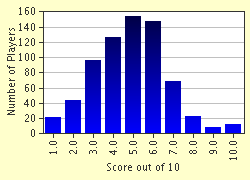 
Other Destinations
Explore Other Quizzes by steiny1

More A to Z Food Quizzes