Gravity Getting You Down? Trivia Quiz

Many of our activities nowadays involve trying to briefly escape the force of gravity, or to experience it in all its glory. Which do you prefer?

Quiz Answer Key and Fun Facts
1. Jumping with our own two legs doesn't seem to quite be enough for young thrill-seekers. The modern trampoline had its beginnings in the 1930s, but in what year did it make its debut as an Olympic sport in Sydney, Australia?

The first commercially-sold trampolines were developed by George Nissen and Larry Griswold, who founded the Griswold-Nissen Trampoline & Tumbling Company in 1942, just six years after making their first trampoline together. Nissen and Griswold were teammates on the Universty of Iowa gymnastics team.

The first Trampoline World Championships were held at the Royal Albert Hall in London, England in 1964.
2. If jumping in one spot isn't enough to get serious air, perhaps wheels and speed will do it. While skate parks have become a common sight today, the first half-pipe was built in 1975 by two brothers from Encinitas, located in which U.S. state?

The first record of a skateboard sighting was in Paris in 1944 (roller skate wheels attached to a plank), but skateboarding as we know it today grew out of surf culture. The first manufactured boards were made in the 1950s for surfers looking for something to maintain their skills when they had no waves to ride. It was called 'sidewalk surfing'.

Until skate parks and other manufactured platforms (like half-pipes) were purpose-built, skateboarders made use of places like reservoirs and swimming pools to get their anti-gravity kicks.

Teenager Tom Stewart and his friends had tried skateboarding in some 24-foot diameter water pipes, which gave him the idea of the half-pipe. He got the help of his architect brother and they designed and built one in their front yard. It quickly made the news, and Stewart quickly formed a company (Rampage, Inc.) to sell his blueprints.
3. Maybe getting a better hang time needs a little less friction and a longer approach. Which Nordic country traces the development of ski jumping back to 1809 with a lieutenant named Olaf Rye showing off to his fellow soldiers?

Lieutenant Olaf Rye managed a jump of 9.5 metres as a display of courage outside the Eidsberg church in Eidsberg, Norway. His accomplishment is a source of pride to both Norway and Denmark, as at the time the two countries were a united political entity (Danmark-Norge). Rye was born in Bř, Telemark, Norway, and is buried in Copenhagen, Denmark.

Although both Denmark and Norway hold some claim to Rye, it was Norway that continued the development of ski jumping into the first public competition at Trysil in 1862. It was not until the 1920s that it was competed internationally, but it has featured in every Winter Olympics since the first one (Chamonix, France, 1924).
4. Falling from a height is quite exhilarating, if you know you are likely to survive it. The first people to try bungee jumping in 1979 were arrested for their efforts.

On April Fools' Day in 1979, Oxford University students David Kirke and Simon Keeling bungee jumped from the Clifton Suspension Bridge in Bristol, a height of 79 metres. Although they were arrested for doing so, they went on to replicate their feat from other more famous and higher bridges (like the Golden Gate Bridge, for instance), and from cranes and hot air balloons as well.

The world's first permanent commercial bungee site was established by New Zealander A.J. Hackett at the Kawarau Gorge Suspension Bridge (near Queenstown) on New Zealand's South Island.
5. If jumping is not your choice for fighting gravity, how about soaring through the sky like a bird? Building on the research of his 19th century predecessors, Germany's Otto Lilienthal constructed the first hang gliders capable of controlled flight. By what nickname did he become known?

Attempts at flight in the manner of gliding had been attempted by man for centuries before Otto Lilienthal came along, but his innovations in unpowered heavier-than-air flight laid the groundwork for the powered flights that would soon follow. His work was the inspiration for the Wright brothers to pursue powered flight.

"Of all the men who attacked the flying problem in the 19th century, Otto Lilienthal was easily the most important. ... It is true that attempts at gliding had been made hundreds of years before him, and that in the nineteenth century, Cayley, Spencer, Wenham, Mouillard, and many others were reported to have made feeble attempts to glide, but their failures were so complete that nothing of value resulted." ~ Wilbur Wright (quote from Wikipedia)

Sadly and ironically, Lilienthal died when he broke his neck in a gliding accident in 1896.
6. Can a powerful engine launch you high enough to escape gravity for a time? Which of these motorcycle events involves an array of skills including thrilling jumps and stunts?

Motocross traces its lineage back to 1924 and an off-road race called 'The Scrambles' (held in Surrey in the UK). Over the coming years, tracks would be refined to be shorter and include jumps and obstacles and races would involve multiple laps. Improvements in technology helped develop purpose-made motocross bikes that varied greatly from their road bike brethren.

Today, motocross events cover the spectrum from racing to exhibitions of aerobatic skill.
7. Combining an earthbound power source with a lift-providing 'chute? Awesome! The modern parasail began its development in the 1960s when Pierre-Marcel Lemoigne altered a 'ParaCommander' parachute into what?

At the time of Lemoigne's design changes, the ParaCommander parachute was the 'chute of choice for most skydivers and for the military. It was a suspension line parachute with steering slots, making it very maneuverable. Lemoigne "sealed the top steering slots then added stabilizer and exhaust vents allowing on oncoming air flow to be redirected to provide lift." (quote from the Parasail Safety Council webpage)

Lemoigne marketed his new 'chute as a 'parasail', and sold it to the Pioneer Parachute Company.
8. Anybody can get on an airplane these days, but being in an enclosed cockpit or fuselage is not quite as thrilling as being in the open air. What is this barebones type of contraption called that includes some form of lift with a power source?

There are actually a variety of 'aircraft' that qualify as ultralights, depending on the definition. Most common among these are powered parachutes (as seen in the picture), powered paragliders, powered hang gliders, weight-shift control trikes, light fixed-wing aircraft, and even a version of helicopter called the autogyro. A hot-air balloon can also qualify as an ultralight.
9. Sometimes jumping from a bridge or a cliff just isn't good enough, is it? The first recorded skydive from a (powered) aircraft was from a Wright brothers Model B biplane.

There is actually some controversy as to whether or not Grant Morton's 1911 parachute jump from the Model B airplane was the real first time, but if that's what the Skydiving.com website history page says, then I'm going with it.

Prior to the advent of flight, parachuting was limited to jumping from raised platforms (towers and bridges and cliffs). Joseph Montgolfier brought about the first real attempts at true 'skydiving' with his hot air balloons in the late 18th century. Powered flight, however, brought new complications as all earlier attempts at parachuting had essentially been done from a stationary point. Jumping from a moving platform required new parachutes and new techniques.
10. Our last gravity-defying activity has only had a select few participants to date. Who completed the first spacewalk on March 18th, 1965?

In the early space race between the Soviet Union and the United States, the Soviets had the upper hand. They put the first man in orbit (Yuri Gagarin) on April 12th, 1961, while American Alan Shepard followed suit only 23 days later on May 5th.

The same thing happened with the first EVA (extravehicular activity) when Aleksei Leonov stepped out of the Voskhod 2 for 12 minutes (on March 18th, 1965). Edward White II replicated this feat with a 23-minute spacewalk on June 5th (79 days later).
Source: Author reedy 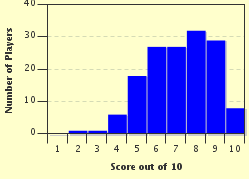 Related Quizzes
This quiz is part of series My Author's Challenge Titles, Part 4:

Yet another installment ten of my quizzes, written in response to some (sometimes) oddball title suggestions by others. Enjoy!


1. Xiphoid Armaments of the Knightly Caste Easier
2. ...And Then What? Average
3. One Way or Another Easier
4. Now Use That Word in a Sentence Easier
5. A Starry Night Average
6. Gravity Getting You Down? Average
7. If My Dog Could Talk Average
8. Hollywood Royalty Very Easy
9. Simplicity to Complexity Average
10. Paw Power Easier