Marie Antoinette had no clue about what foods her peasants could afford. However, cake is a universal favorite food. At least consuming this quiz won't cost you too many carbs or calories.

Quiz Answer Key and Fun Facts
1. What kind of cake must be made without egg yolks?

To rise, an angel food cake depends on air beaten into egg whites. The fat which occurs in egg yolk will make the cake fall. The pan cannot be greased for the same reason. The other cakes mentioned could conceivably be made without egg yolks, but all of them depend on baking powder or baking soda for leavening.
2. What ingredient does not occur in the crust of a true New York Cheesecake?

It's about the crust. A New York Cheesecake has a cookie dough crust (made with butter and flour) but never graham cracker crumbs. Some people may enjoy different toppings on their cheesecake, but graham crackers should never be on the bottom.
3. What ingredient is hidden in a King Cake before serving?

This cake is made to commemorate the three kings (magi) who went to see the newly born baby Jesus. The person who finds the baby receives certain privileges. The baby is added once the cake is done so it doesn't melt! Various forms of this cake are traditional in Latin America, France, and Spain.

It is also a feature of Mardi Gras in New Orleans. A coin or ring may be used as the prize in some cultures. If a metal trinket is used, it can be baked in the batter rather than added later.
4. Wacky Cake is made without milk, butter or eggs.

Wacky cake is characterized by lack of milk, eggs, or butter. It is a chocolate cake made with cocoa powder and rises due to a chemical reaction between vinegar and baking soda. Food historians suggest that this recipe grew out of a time when sugar, butter and milk were rationed.
5. A theory that there is only one fruitcake in the world and that it is regifted Christmas after Christmas was proposed by which well-known US television personality?

Fruitcake has a long history. Some trace it to Egypt (due to the prevalence of dried fruits and nuts in the Middle East.) Other authors comment on its durability which made it a good thing for medieval knights to pack on their quests. In the US, Southern teetotalers omitted the liquor often used as a preservative.

There is a tradition to use fruit cake as a wedding cake and to dispense it in small decorated boxes such that guests can put the cake under their pillow after the wedding to produce nuptial dreams.
6. What unusual ingredient is used in some spice cakes?

The website FoodTimeline.org by Lynne Oliver attributes the development of the Tomato Soup Cake to the Depression. The recipe appeared in the Los Angeles Times in the early 1930's and (like the Wacky Cake) used little sugar or butter.
7. What is reputed be the origin of the sponge cake named Génoise?

This simple sponge cake is used as a base for many more elaborate confections including the jelly roll and the "Buche de Noel."
8. What leavening agent is typically used to make a Kugelhopf?

The Kugelhopf is a traditional Austrian or Alsatian sweet bread rich in eggs and butter and leavened with yeast. Raisins and nuts are additional ingredients. The Kugelhopf is usually baked in a high round tin mold.
9. What special ingredient is hidden under the chocolate icing of a Sacher Torte?

The Sacher Torte originated in the Hotel Sacher in Vienna who closely guards the recipe and the reputation of its cake by controlling its distribution. Luckily for those of us who live outside of Austria, recipes can be found.
10. The Hummingbird Cake is popular in the southern US, but where did it originate?

This rich cake is made with bananas, walnuts and crushed pineapple with a cream cheese frosting.
Source: Author gable 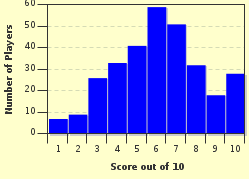 Related Quizzes
1. Bake a Cake With Me! Easier
2. Pineapple Rings and Other Delights Average
3. It's The Most Wonderful Time Of The Year Average
4. It's a Piece of Cake to Bake a Pretty Cake Average
5. You Put WHAT In It?! Average
6. The Irreverent Cake Bribe Strategy Average
7. Cakes, Cakes, Cakes! Average
8. Baking Your Cake and Decorating It, Too Average
9. Back Away From the Cheesecake! Average
10. Get Thee to a Bakery! Tough
11. My Favourite Cake! Tough
12. Cakes - Yum! (UK) Tough


Other Destinations
Explore Other Quizzes by gable