I'll show you a picture with a problem and a description of the error, then you tell me what it is. They are both technical and aesthetic things. Enjoy!

Quiz Answer Key and Fun Facts
1. This picture is washed out and too bright. What is this called?

Overexposure can be caused by two things, too much light or having the camera's settings wrong for the situation. A shutter speed that is too slow or an aperture that is too wide can cause overexposure. Overexposure can be difficult to fix in post-processing, or editing.
2. What aesthetically displeasing thing is wrong with this photo?

Crooked horizons can be prevented by making sure the camera is held level when taking a picture or by using a tripod. They can be easily straightened in post-processing, but this can lead to cropping off part of the image.
3. There is a composition rule called the rule of thirds. This photo breaks it. Why?


Answer: The focal point is centered.

The rule of thirds is a common guideline when it comes to composing a shot. You have to imagine a grid of nine squares, similar to a tic-tac-toe grid, over the picture. The subject should be on one of the lines or where the lines intersect. A picture where the subject is centered breaks the rule, but that does not necessarily mean the photo is bad.
4. This photo appears very noisy, or grainy. What setting caused this?

ISO, short for International Organization for Standardization, is film speed. The higher the ISO, the more noise there will be. A high ISO will also make a picture brighter, which is why it is often used in low light. If there is too much noise in a picture, noise reduction can be used in post-processing.
5. This photo of grass turned out very blue instead of green. What caused this to happen?

Underexposure is the opposite of overexposure. It can be caused by taking a picture without enough light, too many shadows, or using a shutter speed that is too fast. Like overexposure, it can be difficult to mend in post-processing.
7. What aesthetically displeasing thing is wrong with this photo?


Answer: The ears are cut out of the frame.

It's usually best to not cut major parts of the subject out of the photo. When things are cut out of the frame, it can be distracting and cause the eyes to go to that spot instead of to the real focal point.
8. If the flower was the intended subject, what is wrong with this photo?


Answer: out of focus

A subject will be out of focus if the camera focused on something else. In this picture, it is focused on the ground instead of the flower.

Motion blur would occur if the subject was in focus, but somehow moved when the shutter was pressed.
9. Silhouettes can be a very nice technique in photos, but not when you don't want them. What causes a silhouette?


Answer: too much light from the back

A lot of light coming from behind will cause the front of the subject to appear in shadow. If the light is right, a halo of light, or glow, might appear around the subject as well.

Silhouettes are often used in portraiture.
10. Some photographers try to get these in their photos, but in some cases they can be distracting elements or cause the photo to look bad. What is the oval shaped light coming through the leaves in this picture called?

A lens flare is caused by taking a picture towards the sun or other bright light source. Reflection and refraction affect how they appear. They can be many different shapes, sizes, and colors. In some photos they add a nice element, but the use of them depends on the individual photographer's opinion.
Source: Author zebra101 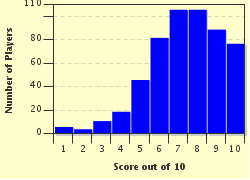