A new friend of yours is a photographer, and when he discusses his favorite hobby he throws out some photo jargon you don't understand, and it doesn't help that the phrases are acronyms, too. Can you figure out what he's talking about? Enjoy!

Quiz Answer Key and Fun Facts
1. Your friend is telling you all about his new camera. "This is the best DSLR I've owned," he says. "The quality is great!" "Really?" you say. "That's cool. Uh, what does DSLR mean again?" What does he say it is?

A DSLR is a type of higher-end camera, usually with an interchangeable lens. Unlike lower-end cameras, like point-and-shoots, they have better quality and more options. As opposed to older film-using SLR cameras, DSLRs use a digital imaging sensor. There are many different lenses that can but attached to the camera body, such as telephoto or portrait lenses.
2. "And the FPS," he continues, "is really great. It's six! Can you imagine?" "Yeah," you reply, nodding your head. "But, what's that?" What does FPS stand for?

Frames per second is the rate at which pictures can be taken. The more FPS the camera can handle, the more photos that can be taken within a second. Most people don't need a large FPS for everyday photos, but it can be useful in high speed or sports photography.
3. "It has a great LCD screen, too," he adds, showing you the large, blank screen on the back of his camera. "What does LCD stand for?" you ask. What does he tell you it means?

Many things besides cameras use LCD screens, like cellphones, computers, and watches. LCDs use less power than plasma or LED screens.
4. A few weeks later, your friend is talking about a photoshoot he did the day before. He says, "Unfortunately, I realized I had forgotten to switch my WB to incandescent. I had to retake all the pictures! At least they turned out well in the end." "Wait," you interrupt. "What did you forget to change?" Which of these settings did he have to fix?

White balance determines how the colors are captured. The different WB settings are based on the lighting, such as incandescent, sunlight, and fluorescent. If a picture is taken with the wrong WB setting, the colors may appear too orange, blue, etc.
5. On another occasion your friend informs you that he usually shoots using MF, but will use AF if he's feeling lazy. You ask him what he's talking about, and what does he tell you?

MF stands for manual focus and involves the photographer adjusting the focus themselves. AF stands for autofocus, where the camera focuses itself.
6. "I can't believe it," he complains. "My SD card is corrupted!" What does he tell you SD means?

An SD card is a type of memory card that, when used in a camera, stores pictures. They are also used in cellphones, computers, and many other electronics. Sometimes they become corrupted for a variety of reasons and cannot be used anymore.
7. On another occasion, while he's telling you about how he went to photograph a waterfall, he says, "I got everything set-up before realizing I had forgotten my ND filter at home," he says with a sigh. "So, I had to postpone that photoshoot." "Oh, well there's always next time, I guess," you say sympathetically. "What is an ND filter?" What does he tell you?

A neutral density filter lowers the brightness of a picture and allows a slower shutter speed to be used, even during the day. It is commonly used to take pictures of moving water to give it a silk, flowing appearance.
8. One day, he's telling you about his new lens. "I love using such a small f-stop. The DOF is produces is amazing!" After asking what DOF stands for, he tells you it means which of the following?

Depth of field is a measure of what is in focus in a picture. The aperture determines how wide or narrow the DOF is. For example, a larger aperture, like f/1.8, will yield a shallower DOF than a smaller one, like f/22.
9. While looking through your friend's vacation photos on Facebook, you come across a beautiful landscape shot. All that is in the caption is the acronym "HDR". Wondering, as always, what he means, you leave a comment asking him. What does he reply with?

High dynamic range is an editing technique that adds contrast to an image. It involves compiling multiple images together in post-processing. It is commonly used in landscape and architecture photography.
10. "A lot of photographers shoot in RAW, but I have no need to, plus the files are too large, so I just shot in JPEG." You open your mouth to ask, but he stops you. "It stands for Joint Photographic Experts Group." "But," you ask, smiling, "what about RAW?" Is RAW an acronym?

RAW is not an acronym. It is just commonly capitalized when written. Like JPEG, it is a type of digital file, but it is much larger and allows the photographer to edit the pictures more in post-processing.
Source: Author zebra101 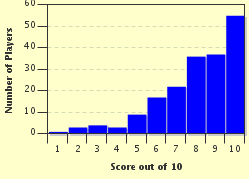