What Kind of "Nut" Are You? Trivia Quiz

The hard fibrous fruit known as the nut has been a staple in the Human diet for hundreds of thousands of years. Come learn about many of the different nuts we eat and one that we don't. We will be using the more liberal culinary definition for a nut.

Quiz Answer Key and Fun Facts
1. Macadamia nuts are the pride of Hawaii, however their origin is actually in Australia. However, it was found that the trees thrived in Hawaii as well. What or who is the Macadamia nut named after?

Baron Ferdinand von Mueller of the Royal Botanical Gardens of Australia named it after his friend John MacAdam. Unfortunately, Mr MacAdam died on his voyage to taste the nut named after him. Australia and Hawaii are the two leading producers of macadamia nuts in the world today.
2. This 'nut' is actually a legume. Once it self pollinates, the stalk turns downwards and buries the nut into the ground. These nuts are usually served roasted, however, they can also be boiled - a rather slimy delicacy enjoyed in the southeast USA. Which nut am I talking about?

The Peanut originated in South and Central America. After being exported to Africa, it was then brought to North America. Inventor George Washington Carver originated over 100 uses for the peanut. Also of note, the 39th President of the US, Jimmy Carter, was a Georgia peanut farmer.
3. The caju tree brings us a nut in a rather unusual form. This nut is actually a drupe which, in this case, is attached to the end of a pseudo (false) fruit. These nuts are harvested in the warm tropical parts of the world and find their way into Asian cuisine. They are also decadent when covered in chocolate. Which nut might I be describing?

The Caju tree is indigenous to northeast Brazil. The pseudo fruit is so called because it does not contain seeds, but it is edible and enjoyed by people in Brazil. Unfortunately the fruit's skin is too delicate to be transported and therefore is not used as a cash crop.
4. Amaretto liquor's signature flavor is due to this Middle Eastern nut. Which nut is it?

Almonds originated in the Middle East but today California accounts for 80% of the global almond supply. The almond is actually a drupe rather than a true nut. It is also used to make marzipan and nougat. My favorite, however, is when they are smoked!
5. The name of this specimen originates from the Algonquin word for 'nut requiring a stone to crack'. It is cultivated in the southeast USA and is a favorite when made into a pie for Thanksgiving dessert each fall. Which nut might this be?

Pecan trees are in the hickory family. While the nuts are high in fat, they make *really* good pies! They also go well in cookies. They first started being cultivated in 1880 in the southeastern USA.
6. This nut is native to Iran and the surrounding countries. Commercially, they are often dyed green or red more due to expectation by consumers than by real need. They are also used in ice cream, pudding and baklava. Which nut am I describing?

Pistachios were originally dyed to cover up staining which occurred when they were hand picked. Stains are no longer a concern now that they are handled by machines. Popular perception has led to the continued dying, even though there is no longer a need.
7. We have a tragic tale of a tree which once was abundant across the eastern half of America but was virtually wiped out at the beginning of the 20th century by disease. Which nut has been sung about in a Christmas carol "roasting on an open fire"?

Unfortunately, the Asian fungus "diaporthe parasitica" was introduced to the area and caused the "Chestnut blight" from 1900 to 1908, virtually killing all but a few of the 4 billion American Chestnut trees. Only very few remain and many of those live just long enough to drop a seed before succumbing to the fungus. For over 100 years, efforts have been made to protect and help bring the species back but with little success. Before 1900, Chestnut trees were the staple lumber supply for building houses in eastern America.
8. Talk about symbiotic relationship! This tree is dependent on two bees, an orchid, and a rodent to reproduce. The orchid is required to attract the male bee, which attracts the female bee, which pollinates the complex flower of the tree so it will become the fruit. This fruit, which resembles a coconut, then requires an animal, usually a rodent, to break it open and not eat all of the triangular shaped seeds (nuts), but rather bury them in a place which has access to sunlight. Oh, did I mention the tree grows in the Amazon rain forest? Which nut is the product of this tree?

Brazil nut production requires the complex rainforest model to reproduce. Efforts to produce the nuts in orchards are poor at best so the production of the Brazil nuts we eat depends on wild harvests. Due to this demand, the harvest of Brazil nuts is offered as an alternative to destroying the rainforest for local peasants.

The fruit inside the coconut-like shell is in the form of 8 to 24 triangular seeds. The nut inside the seed has the highest saturated fat content of all edible nuts. As a result, Brazil nuts become rancid if shelled too long before eating.
9. This 'nut' doesn't even pass the liberal culinary standard for nuts, but rather is a deep fried kernel seed. Which is it?

In 1936, Albert Holloway invented the corn nut to sell to tavern owners to give to patrons as a snack while they drank. Holloway took corn kernels and deep fried them to make this tasty snack upon which he could add spices to change the taste. He later discovered a Peruvian species, known as Cusco corn, grew kernels up to 1 inch which he added to his recipe.

The product Corn Nuts is now owned by Planters, a division of Kraft foods.
10. If eaten raw, this nut can destroy red blood cells due to a toxin called aesculin. Despite the toxic nature of this nut, the state of Ohio is downright crazy over it. They have even nicknamed their state and their university mascot after this poisonous nut. Which nut is it?

Ohio is the "Buckeye State" and "Brutus Buckeye" is the mascot for Ohio State University. Native Americans boiled off the toxin and were able to make porridge out of the nut though few others have found a use for it. The lumber is also not much used. So the primary use of the tree is... well... being a tree.
Source: Author rxbigdawg 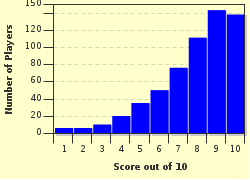 
Other Destinations
Explore Other Quizzes by rxbigdawg