All the World's a Stage Trivia Quiz

Another day, another tour courtesy of the Last Ones In! This time it's forms of theatre hailing from different parts of the world. Can you match the drama form with its country of origin?

Noh (meaning skill or talent) is a form of Japanese musical drama that dates from the mid-14th century, and is still regularly performed today. It is often based on traditional tales in which a supernatural being is transformed into a human, and requires highly trained actors and musicians, who perform by conveying emotions through the use of stylized gestures - while costumes and masks represent the various roles.

The open stage, characterized by an independent roof supported by four columns, allows the audience to share the experience with the performers. Being firmly rooted in tradition, Noh follows a very strict set of rules.
2. Commedia dell'Arte

Known as the first form of professional theatre in Europe, Commedia dell'Arte is a theatrical form that flourished in Italy in the mid-16th century, and later became very popular in France and other European countries . It was characterized by conventional plot lines (often written on themes of love, sex, jealousy and such), improvised dialogue and a cast of colorful stock characters - such as Arlecchino (the servant), Pantalone (the old miser) and Colombina (the spirited maidservant). Commedia dell'Arte was responsible for the advent of actresses, as female roles were played by women, unlike what happened in other countries at that time.

Many troupes were formed to perform these plays: each of them had an "impresse" (a sort of coat of arms) symbolizing its nature.

Many of these troupes traveled around Europe, where their performances had a profound influence on the art and culture of later eras.
3. Zaju

Mostly associated with the time of the Yuan dynasty (13th-14th century), zaju (also known as Yuan opera) was a drama form with a four-act structure, Its name means variety show - which aptly describes its nature, as it combined recitations of prose and poetry with singing, dance and mime, with an emphasis on comedy. Zaju was the result of a combination of cultures over a long period of time, emphasizing the "melting pot" aspect of China in the Middle Ages. Now it is seen as an important stage in the development of what is known as Chinese opera.
4. Mystery play

Mystery plays (whose name probably comes from the Latin "ministerium", i.e. occupation, as they were usually performed by craft guilds) are among the first examples of formally developed plays in medieval Europe. They were all based on stories from the Bible, and as such were performed in churches with the accompaniment of antiphonal songs - often in cycles that lasted for days. Mystery plays began as dramatized liturgical dialogues around the 10th century, and developed into more elaborate productions, often performed wholly or at least partly in the vernacular, rather than in Latin. Though medieval plays of religious content can be found in other European countries as well, the four extant English mystery play collections are by far the most complete: the York cycle (probably performed in 1376) comprises 48 pageants, covering sacred history from the creation to the Last Judgment. Mystery plays were also very influential for the development of English drama in the Renaissance.
5. Koodiyattam

Traditionally performed in the southern Indian state of Kerala, Koodiyattam (Malayalam for "combined acting") is the only surviving form of Sanskrit theatre. With a story that goes back over a thousand years, it has been recognized by UNESCO as a masterpiece of the Oral and Intangible Heritage of Humanity, in an attempt to save an ancient art form that has, sadly, been dying out. Like other Asian theatre forms, Koodiyattam blends acting with music and dance, and is accompanied by a set of traditional instruments; its performances are very lengthy affairs, lasting up to 150 hours.

The Atellan Farce ("Fabulae Atellanae") was a form of comic drama that originated in the culture and language of the Oscans, an Italic people of southern Italy, and was imported into Rome in the 4th century B.C., where it became very popular. These masked improvised farces were usually staged after longer plays, and involved stock characters - such as the old man, the country bumpkin and the arrogant soldier.

Many of these plays were definitely licentious in nature, and the performances often targeted specific people or families - bringing public disapproval, and often banishment, upon the players.
7. Zarzuela

Originating in 17th-century Spain, zarzuela is a form of musical play in which the action is carried out by alternating sung and spoken scenes. Topics range from mythology and folktales to real-life stories. The name of this subgenre of musical theatre comes from the royal hunting lodge of King Philip IV (so named because ofthe brambles, or "zarzas", that grew there), where these plays were performed for the first time.

Unfortunately, zarzuelas fell out of favour in a relatively short time, mostly because of the competition of foreign opera.

This trend was reversed in the 19th century, when in Spain and in its colonies began a demand for musical theatre in the Spanish language. Although the zarzuela's popularity in Spain declined again after the mid-20th century, due to the effects of the Spanish Civil War, it seems to have found favour again, at least as regards performances and recordings.
8. Wayang kulit

Wayang kulit ("leather puppet") is a traditional form of puppet shadow play found on the Indonesian islands of Java, Bali and Lombok. Its name refers to the material from which the figures are carved (generally water buffalo and goat hide). Shadow puppetry is a very ancient form of entertainment in Southeast Asia, though it also exists in other cultures. Wayang kulit, probably the best-known of these forms, was influenced by Hinduism, which used the traditional Indonesian puppet shows to tell stories from the great Hindu epics, the "Ramayana" and the "Mahabharata".

In Bali, where Hinduism is still prevalent, the puppets are more realistic, while in predominantly Muslim Java the figures ("ringgit") are elongated. The "dalang" (shadow artist) manipulates the puppets behind a linen screen lit by a lamp, accompanied by singers and a gamelan orchestra.

In Indonesia there are other forms of wayang theatre, some of them involving human dancers rather than puppets.
9. Naqqāli

Naqqāli (a word that denotes the performer) is one of the oldest forms of traditional Persian theatre. The performer can be a man or a woman, simply dressed but wearing a single piece of costume of historical significance (such as a piece of old armour), who tells stories often accompanied by music, dance and decorative scrolls.

In the past, Naqqāli was often performed in coffeehouses (as well as private houses and historical venues). Unfortunately, the decline of these institutions - as well as the aging of the performers and the lack of interest among the younger generations - are threatening the survival of this ancient art form.
10. Aláŕrěnjó

According to some scholars, Aláŕrěnjó - a theatrical tradition of the Yoruba people of Nigeria - originated in the 16th century from the masquerade of the Egungun, a traditional ceremony related to the cult of the ancestors. The name Aláŕrěnjó refers to a troupe of masked traveling performers who created short, satirical scenes featuring stereotypical characters, and including mime, acrobatics and music (especially percussion). Now live performances have become increasingly rare, as the troupes have moved into film and TV.
Source: Author LadyNym 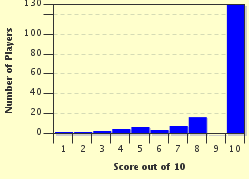 Here is a list of the quizzes written by my team, Last Ones In, for the third edition of FT's legendary quiz authoring race.