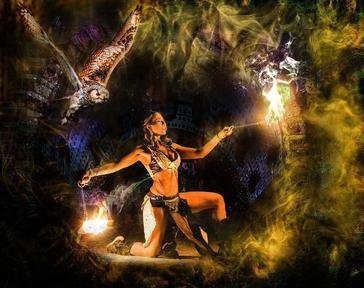 This is a fairly simple quiz about modern dancers through history.

Share on Facebook
Share on Twitter
Share by E-Mail
Author
rj211
Time
5 mins
Type
Multiple Choice
Quiz #
32,563
Updated
Dec 03 21
# Qns
10
Difficulty
Very Difficult
Avg Score
4 / 10
Plays
637
This quiz has 2 formats: you can play it as a or as shown below.
Scroll down to the bottom for the answer key.

Quiz Answer Key and Fun Facts
1. Who is known as the 'bad boy' of modern dance?

Mark Morris was born in 1956 in Seattle WA. He had no formal training in modern dance when he came to choreography. He got his reputation for his choreography's tendency to confront steroetypes and challenge expectations. He is also characteristically loud-mouthed, provocative, and openly homosexual.
2. The dancers in Pilobolus are known for what kind of background?

Pilobolus was formed in 1970 by 4 male Dartmouth students with no previous dance experience. It has developed since then into a blend of athleticism and dance technique, as more dancers with varying backgrounds have joined. It is still known for being a company with dancers coming from non-dance backgrounds, despite the few with traditional training.
3. Which of the following women was NOT a founder of the Judson Church movement?

Although Anna Halprin's work in improvisation influenced many of the founders of the Judson Church movement, she was on the other side of the country when her proteges extended her ideas.
4. Which of the following dancers did NOT study at Denishawn before moving onto the dance scene on his or her own terms?

Although she is often though of in the same group with the other dancers mentioned, Hanya Holm was not a part of Denishawn. She participated in the Bennington College School of Dance with the others in the 1930s.
5. From what school did Twyla Tharp graduate?

Twyla graduated in 1963 with a BA in art history. There wasn't a dance major at Barnard at the time. Although she did attend Pomona, she transferred to Barnard before graduating.
6. Which of these is true of the original members of the Alvin Ailey dance company?


Answer: They were African-American modern dancers.

The Alvin Ailey dance theater has been a major force in redefining the black dance tradition, and, in fact, most of the members of the company are African American.
7. Which of the following dancers did NOT dance with Martha Graham?

Jose Limon danced with Doris Humphrey and Charles Weidman, and toured with previous members of the Graham company, but never danced with it himself. Cunningham was with her from 1940-45. Taylor 1955-62. Sokolow 1930-38.
8. Which of the following choreographers is best known for his modern adaptations of classical ballets?

Ek's most renowned works include remakes of Giselle and Swan Lake, though some people also consider the modern versions to be desecrations of classic works.
9. Which of the following dancer/choreographers died in 1988?

Arnie Zane was one half of the Bill T. Jones-Arnie Zane choreographic collaboration. Zane died of AIDS, and Jones ended up choreographing a number of somewhat controversial works about disease, death, and those who are left behind.
10. Which of the following companies is NOT based in NYC?

MOMIX is based in Connecticut.
Source: Author rj211