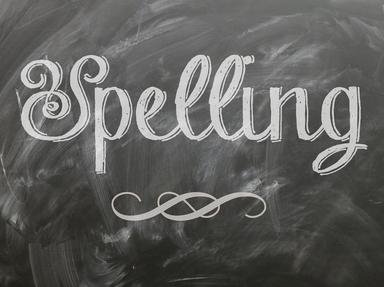 Put on your best Easter bonnet and test your spelling and fashion knowledge with this quiz.

Quiz Answer Key and Fun Facts
1. This hat is synonymous with the Australian country lifestyle. Made of rabbit fur felt, they have been made in Australia since the 1870s.

The Akubra company makes over 100 different styles of hat now. The company was started by Benjamin Dunkerley in the 1870s and is now owned by his descendants. Akubra supplied many of the slouch hats worn by Australian diggers in World War I. The Akubra hats you might have seen with corks attached to the brim with string are pretty much history. I've certainly never seen one in real life but they did exist in times gone by.
2. This head covering got its name from a town in Ukraine. The Crimean War was being fought nearby and these helmets were knitted in the UK and sent to soldiers to protect them from the cold.

Balaclavas were traditionally made from wool but are now made of various materials. It covers the entire head exposing only part of the face, sometimes only the eyes. Race drivers wear balaclavas made of flame-retardant material in case of accidents. Winter sport participants wear balaclavas to protect their faces from the cold wind and maintain warmth. Baklava is a delicious Middle Eastern dessert made with pastry, nuts and honey.
3. In The UK it's called a bowler hat. The bowler is a hard felt hat with a rounded crown. Known as a bombin in South America, what is it known as in the USA?

The derby/bowler hat is what I always associate with London bankers. The busby is a short fur military hat.
4. What would a Frenchman call a "cap"? This term is used for the cotton caps formerly worn by racing cyclists in times before safety concerns dictated the use of crash helmets.

You wouldn't see a casquette on a racing cyclist during a race as cyclists must protect their heads with a properly designed crash helmet. You may still see a casquette worn on the winner's podium made in the team colours of the cyclist.

A chullo is a South American hat with ear flaps made from llama wool or similar. Edith Piaf's song "Les Trois Cloches" translates as "The Three Bells" and has nothing to do with hats!
6. This is the hat associated mostly with Sherlock Holmes.

Sir Arthur Conan Doyle never specifically wrote that Holmes wore a deerstalker, but he was described as wearing something similar. This type of hat is more commonly associated with a rural setting due to its high functionality for hunting. It protects the wearer from the cold by putting the flaps down over the ears.

The flaps can also be put up and out of the way if not needed. The traditional checked pattern also provides some camouflage.
7. This is a felt hat pinched in at the sides and with a lengthwise crease. Hollywood often depicted gangsters and detectives in film noir with these hats. Indiana Jones wore this hat more recently in his series of movies.

The fedora was initially a women's fashion item, only becoming popular with men after World War I. The homburg is a similar style of hat but is of a more rigid construction. Its popularity diminished as the fedora's rose.
8. Think about the French military. Picture Charles de Gaulle. Think of Gary Cooper in the movie "Beau Geste". Can you see the cap with a flat circular top and a visor/peak? What is it called?

The kepi is still worn by the French military and police force though it's not as common as it once was. In America it was often seen during the Civil War. Elsewhere around the world it's been worn by various constabularies and organisations such as the Swiss military and British Rail. A bearskin is the tall hat worn by the Grenadier Guards in the UK.
9. Although it can trace its ancestry to ancient times in Anatolia, this hat is probably best known as the Smurfs' hats.

The Phrygian cap is a soft cone shaped cap with the top tilted forwards. It was originally worn by the people of Phrygia in Anatolia. It became known as the liberty cap as it symbolised the pursuit of freedom in the Roman west. Centuries later it was also a symbol of freedom during the French and American Revolutions. The United States Senate has the Phrygian cap on their Seal. Eight Latin American countries have also incorporated the Phrygian cap into their coats of arms to indicate their struggle for independence.
10. The chef making your dinner in your favourite ritzy restaurant may be wearing one of these hats.

A toque is the tall, white pleated hat worn by professional chefs. A toque may have up to 100 pleats. The pleats are said to signify the number of ways an egg may be cooked.
Source: Author Tizzabelle

This quiz was reviewed by FunTrivia editor CellarDoor before going online.
Any errors found in FunTrivia content are routinely corrected through our feedback system.
Most Recent Scores
Jan 21 2023 : demurechicky: 10/10
Dec 05 2022 : Guest 34: 4/10 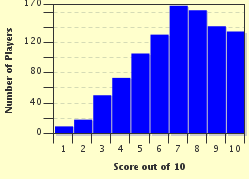 
Other Destinations
Explore Other Quizzes by Tizzabelle