This is a quiz on the theories and practice of theatre during the Romantic period. Enjoy!

Quiz Answer Key and Fun Facts
1. Which historical figure was an embodiment of Romantic ideals and led Europe away from Rationalism?

Napoleon (1769-1821), before he became an overbearing dictator, presented Europeans with a hopeful leader. He brought freedom from aristocratic oppression and, like the Romantic hero, created an external world according to his own will and ego.
2. Which period of history could Romanticism BEST be said to be a return to?

Romanticism was fascinated with many elements of Medieval art and philosophy. The Greek and Roman Empires were re-imagined in the Classical period. The Spanish Golden Age was its own artistic period.
3. Georg Wilhelm Friedrich Hegel (1770-1832) built on the ideas of Kant and provided some of the philosophical foundations for Romanticism. What did his theory of dialectics posit?

The influence of this thought can be seen in Romanticism's emphasis on life's dualities.
4. August Wilhelm Schlegel (1767-1845) was a critic and essayist who helped formulate Romantic theory. Did he believe in adherence to the Neoclassical rules of dramaturgy?

He suggested that the proper form was in fact a more organic unity. This removed external structural rules and allowed Romantics to allow the structure of their works to emerge from the content.
5. Which of these philosophical statements is LEAST likely to have come from a Romantic?

Romantics actually believed in the duality of human existence: that it is a balance between opposites (body/soul; finite/infinite).
6. Which of these artistic elements is LEAST likely to be found in a Romantic drama?

Romanticism would actually promote heightened, released passions. Mary Shelley's "Frankenstein" is a good example of the three artistic elements found in Romantic literature. The novel definitely embraces the grotesque in the form of the monster. It also has a complex structure that switches back and forth between the monster and Frankenstein.

Shelley also deals with nature in a loving way, setting many pivotal scenes against a natural landscape. It is also a good example of heightened passions, in this case driving Frankenstein to act against reason and the monster to drive himself to the edge of the world to exact revenge.
7. Edmund Rostand's "Cyrano de Bergerac" (1897) is possibly the most successful play of the Romantic period. In it, the title character helps a friend woo Roxane because he fears himself too ugly to be worth her love. With which of his own features did Cyrano find fault?

Cyrano's nose was grotesquely oversized, so though he loved Roxane, he helped Christian to woo her. Not until just before dying did Cyrano reveal the truth to Roxane.
8. Romantics believed that Nature could be fully comprehended.

A Classical hero would likely be dignified and aristocratic, but a Romantic hero is fiercely individual, rebelling against anything that hindered his individuality.
10. Romantics accepted subjectivity as a necessary condition of how humans experienced the world.

Unlike the Classicists, who attempted to apply reason to world so as to experience it objectively, Romantics embraced the subjectivity of human experience.
Source: Author rj211 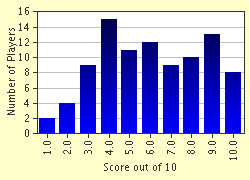