The Richness of Melbourne Theatre Quiz

Quiz Answer Key and Fun Facts
1. The Regent Theatre in Collins Street, Melbourne has had a rocky existence, with numerous closures, threats of demolition and re-development. Since the mid-1990s the Regent Theatre has enjoyed a come back, and stages mainly what type of theatre?

The Regent Theatre is known for its Musical productions; since the mid-1970s, most of the major Australian and overseas musicals have been performed there. This historical listed building is in the midst of the "Paris" end of Collins Street. Built in 1929, the theatre enjoyed a good early life, but following a fire in the 1940s, and reports of pending closure right up to the 1960s, the theatre finally closed in 1970. Reports of plans to demolish the theatre and turn it into a carpark finally got people into action to save it.

The theatre finally re-opened in 1996.
2. This Melbourne theatre is the oldest continuous theatre on mainland Australia. Which theatre is it?

The site of the Princess Theatre started off in the nineteenth century gold rush era with an amphitheatre. The Princess Theatre opened in the 1920s with numerous changes of ownership, and with the different owners the type of performances held at the theatre also changed.

In 1986 the theatre gained a new owner who restored it to its 1920s style and elegance. When the theatre re-opened in 1989 its coup of gaining "Les Miserables", followed by "The Phantom of the Opera", put it back on the map.
3. The great ballet dancer Anna Pavlova performed twice in Melbourne at this theatre. What was it?

Anna Pavlova had two Australian tours, one in 1926, the other in 1929. Both Melbourne performances were done at Her Majesty's Theatre. Her Majesty's Theatre was another building and entertainment centre that was built as a result of the gold rush in the nineteenth century.
4. The Comedy Theatre was the venue for the first production of a famous Australian musical based on the novel by Ethel Turner. What is it?

"Seven Little Australians", based on the novel of Ethel Turner, debuted in Melbourne at the Comedy Theatre in Exhibition Street in 1988. The story revolves around seven children, their unsympathetic father and their discipline wielding step-mother.
5. Originally this organisation was called Hoopla, which it changed to the Playbox Theatre Company. It is located at the Malthouse Theatre. The main purpose of the company is to support Australian playwrights.

The Playbox Theatre Company's mission is to support Australian playwrights, producing their plays and promoting their performances. They were originally located in Exhibition Street until the theatre was destroyed by fire in the 1980s. The company relocated to The Malthouse Theatre in the 1990s. As the name suggests, prior to being a theatre The Malthouse was a brewery.
6. This theatre is not located in Melbourne's central business district, but at the bayside suburb of St. Kilda. What theatre is it?

The Palais Theatre started life as a cinema with the largest audience capacity of all theatres in Australia. The design of the theatre is based on Moorish architecture, and the building, with its two domed towers, is listed on the Victorian Heritage Registry. The inspiration of the interior is Art Deco. Within St. Kilda there are a number of buildings of similar ilk, including Luna Park, the Pavilion and the Baths.
7. Fortyfivedownstairs theatre is progressive, seeking out experimental and thought-provoking work. The amazing thing about it is that it is not-for-profit.

Located in Flinders Lane, Melbourne (an area traditionally known for the rag trade) is fortyfivedownstairs theatre. As the name suggests, it is located at 45 Flinders Lane in the basement. This not-for-profit organisation is there to assist up and coming playwrights to stage their performances.

It is a very supportive group of people who encourage artists both artistically as well as provide an affordable venue.
8. Improvisational theatre is an integral part of what Melbourne festival?

Improvisation theatre is created by the artist as it is performed. There is no script or direction. Actors / comedians build up a story and it unfolds as they tell the story. The theatre can range is scope from a monologue to various artists playing off one another one stage.
9. Barry Humphries is a well known comedian, writer, actor, author and satirist, known in his early university days for his Dada movement involvement. What was the theatre group he joined while in University?

Melbourne University started the Union Theatre Repertory Company which became the Melbourne Theatre Company in the early 1950s. Barry Humphries started off with pranks for which the sole purpose was to shock people. While he was with the Melbourne Theatre Company the beginnings of Edna Everage was born, as the "Olympic Hostess" in anticipation of Melbourne's hosting of the Olympic Games. And the rest is history.
10. Along the Yarra River is the Arts Centre Melbourne. Construction of the Centre began in the 1970s but the theatre of the Arts Centre did not open until 1984. Who was the architect? 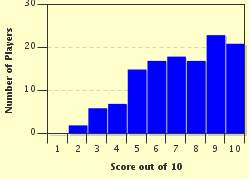 Related Quizzes
This quiz is part of series Running for Our Lives:

Amazing Race Three List from Running for Our Lives