This great novel by John Steinbeck is the story of two families. The Trasks are one of them.

Quiz Answer Key and Fun Facts
1. Adam shows his love for his stepmother, Alice, by leaving her small presents - flowers, a feather... Does she know that they come from Adam?

She believes that the presents come from Charles, her natural son - "'You have to know him,' she repeated. 'For a long time he has given me little presents, pretty things you wouldn't think he'd even notice. But he doesn't give them right out. He hides them where he knows I'll find them. And you can look at him for hours and he won't ever give the slightest sign he did it. You have to know him.'
She smiled at Adam and he closed his eyes."

Rereading this book for this quiz, I was surprised at how often certain themes came up, over and over. Gifts - misunderstood, unappreciated, unbestowed - appear again and again.
2. After Adam escapes from the chain gang, he telegraphs Charles for money to come home. The telegraph operator asks Charles to give him a question that no one but Adam could answer, to ensure that the money is not going to an imposter. What question does Charles ask?


Answer: What did you give Father on his birthday, just before you went in the army?

It's unlikely that Adam would ever forget, because this pup was the cause of Charles attempting to kill him - their father had loved the pup, and disregarded the pearl-handled German knife Charles bought him. The first, and most obvious, parallel to the story of Cain and Abel in this novel, but not the last.
3. In those days before blood testing and prenatal vitamins, it was not uncommon for pregnant women to crave odd and unnatural foods - "some said for filth, and it was set down to the Eve nature, still under penance for original sin." What does Cathy crave while she is pregnant?

"The carpenters, repairing the old house, complained that they could not keep the lumps of chalk with which they coated their chalk lines. Again and again the scored hunks disappeared. Cathy stole them and broke them in little pieces. She carried the chips in her apron pocket, and when no one was about she crushed the soft lime between her teeth."
4. Cathy has no intention of staying in the marriage; she is only waiting for the trap of her pregnancy to be sprung. Does Cathy warn Adam that she will not be staying with him?

"Adam, I didn't want to come here. I am not going to stay here. As soon as I can I will go away."
Adam, of course, is blind to her nature, and laughs this off. A gift, again - the ranch, a family, a future - that is just not wanted.
5. Where is Lee, when Cathy shoots Adam and leaves him?

Cathy sends him to King City, to buy a "nursey bottle", and tells him to stay for a few days, until Monday. Lee is reluctant to go, suspecting that something is up, but doesn't feel he can outright disobey - "Mebbe I come back late".
6. What does Adam first tell the deputy happened to his shoulder?


Answer: He was cleaning his gun and it went off

Horace does not believe him, as it would be impossible to receive that wound in that way. He knows that Adam served in the cavalry, and would have been familiar with, and competent with, that pistol. Eventually he drags Adam's story out of him, but finds it hard to believe.

He suspects that maybe Adam shot his wife, until he talks to the sheriff in Salinas, and learns about the new girl, at Faye's whorehouse.
7. What are the twins wearing, on their naming day?

"...the boys were dressed in the straight trousers and the frogged and braided jackets of the Chinese. One was in turquoise blue, and the other in a faded rose pink, and the frogs and braid were black. On their heads sat round black silken hats, each with a bright red button on its flat top...'A boy should be well dressed on his naming day'".
8. After Samuel's funeral, Adam visits Cathy (now Kate) in Salinas. When he gets back to King City, where does he go first?

The scene where the mechanic teaches Adam to start the car is one of high comedy - "Just call me Joe!"
9. To me, the most memorable part of this memorable book is the story of Lee's birth. His parents (his "dear parents") have a plan, to run away from the work camp and have the baby in a burrow up in the mountains. What happens to ruin their plans?


Answer: His father breaks his leg

Lee's father breaks his leg in an accident, and his mother goes into premature labour. This gives away the secret - there is a woman in the camp - and the other men go mad. Although the book does not spell it out, it is obvious that she is raped, to death.
However - "My father always told it at the last. No child ever had such care as I. The whole camp became my mother. It is a beauty, a dreadful kind of beauty. And now, good night. I can't talk any more."
10. Adam decides to move himself and the boys into Salinas. Whose house does he buy?

It's "a nice little house up the street next to Reynaud's Bakery". Dessie, who had been the light of life to her family and her customers, had her heart broken in an unhappy love affair. She decides to leave Salinas and move up to the ranch with Tom, to look after him.
11. After the move to Salinas, Lee finally gets his chance, to move to San Francisco and start his bookstore. How long is he gone?

"'I got lonesome. That's all. Isn't that enough?'
'How about your bookstore?'
'I don't want a bookstore. I think I knew it before I got on the train, but I took all this time to make sure.'
'Then there's your last dream gone.'
'Good riddance.' Lee seemed on the verge of hysteria 'Missy Tlask, Chinee boy sink gung get dlunk.'"
12. How does Cal find out about Cathy?


Answer: He pieces together bits of information picked up over time

One night, Rabbit Holman, drunk and forgetting who Cal was, and how old he was, takes him to Kate's, to the 'circus'.
"You remember who Kate is, don't you, George? She's Adam Trask's wife, mother of them damn twins. I never forget the time she shot him and ran away. Plugged him in the shoulder and just ran off. Well, she wasn't no good as a wife but she's sure as hell a good whore."
13. When Cal is arrested, what had he been doing?

In one of the town's periodic raids to 'clean up' vice, Cal is scooped up. This leads to a closer relationship between Cal and Adam, as Adam tells Cal some of his own past. The boy's love for his father is cemented.
14. What is Kate's response to Ethel's blackmail attempt?


Answer: She has her run out of town

It's a pretty clumsy blackmail attempt - Ethel is not too bright. Kate has her framed for stealing, and run out of town. Later, though, she regrets this. Her paranoia grows; eventually she builds her 'cave' where she can feel safe.
15. What happens when Aron comes home, the night he passed his tests?


Answer: Lee offers to beat him up

Adam has a big celebration planned, but Aron doesn't even tell his family about the tests, and goes off to dinner with Mr Rolf. (Another gift, rejected....) Lee waits for him on the porch:
"'I want you to go in and wake him up if he's asleep, but I don't think he'll be asleep. I want you to tell him.'
'I won't do it.'
Lee said softly, 'Aron, did you ever have to fight a little man, a man half your size?'"
Source: Author agony 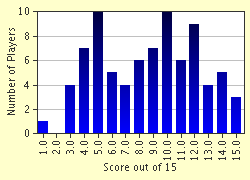