This quiz will be easy if you have read Rudyard Kipling's "The Jungle Books", even if it was many years ago. Be warned, though - having seen the movie (any of the movies) will do you no good at all.

Quiz Answer Key and Fun Facts
1. What does the name "Mowgli" mean?

He is called "frog" because he is naked, with no fur.
2. Who speak(s) for Mowgli at the 'looking-over' at the Council Rock, when he is adopted into the wolf-pack?

By the Law of the Jungle, if a cub's rights are disputed, he must be spoken for by two members of the pack who are not his mother and father. Baloo the Bear is allowed at the council, even though he is not a wolf, because he teaches the Law to the young cubs.

He speaks for Mowgli, and then Bagheera buys the life of Mowgli with a fat bull, newly killed, because "to kill a naked cub is shame".
3. If Mowgli needs to swear, what oath does he use?


Answer: By the bull that bought me

This is a reference to the bull that Bagheera paid for him.
4. Why does Bagheera consider himself something of an expert among the animals on matters pertaining to Man?


Answer: he was born in captivity

Bagheera was born in the King's cages at Oodeypore. Then, one day "...I broke the silly lock with one blow of my paw and came away." This is the reason he pays the bull for Mowgli's life, as he has a fellow-feeling for another who was born among men.
5. When the Bandar-log (monkey people) steal Mowgli, where do they take him?


Answer: to the Cold Lairs

Kipling's portrayal of the Bandar-log is pretty clearly a sly poke at what we would now call the "chattering classes", those who comment upon what others have done, rather than doing themselves. "We are the most wonderful people in all the jungle! We all say so, and so it must be true," "What the Bandar-log think now the Jungle will think later".
6. What are the Master Words that Mowgli uses to get help from Chil the Kite and from the Poison-People during his adventure with the monkeys?


Answer: We be of one blood, ye and I

Even Bagheera is driven to call for help in the first rush of the battle with the monkeys. "...in despair (he) gave the Snake's Call for protection - "We be of one blood, ye and I" - for he believed that Kaa had turned tail at the last minute."
7. When Mowgli has killed Shere Khan, and returns to the village, what is he greeted by?

Hathi had, years before, razed a village in revenge for being caught and wounded in a trap. He only insists that there be no killing. "My tusks were red at the sack of the fields of Bhurtpore and I would not wake that smell again."
9. Who guards the treasure chamber where Mowgli finds the King's Ankus?

He had been put into the chamber years before "...that I might teach death to those who came to steal."
10. From whom did Mowgli get the idea for how to defeat the Dhole, the Red Dogs?

Kaa had, many years before, seen a stag leap off the cliffs above the hives of the bees into the river, and live.
11. Who are "The Little People of the Rocks", who Mowgli uses against the Red Dogs?

Mowgli leads the pack of dogs over the openings of the beehives, and then leaps to safety in Kaa's coils below. He is not stung because he had coated his body with garlic, which the bees dislike.
12. Does Akela survive the battle with the Red Dogs in the river?

Before he dies he tells Mowgli "Go to thine own people".
13. Does Mowgli appear in any other of Kipling's works besides "The Jungle Books"?

"In the Rukh" is told from the point of view of Gisborne, the English Forest Officer. A grown-up Mowgli appears in his section of jungle, takes a wife, and settles down as a sort of forest ranger with the help of Grey Brother and his other litter-mates.

"Rikki-Tikki-Tavi" is probably the most famous non-Mowgli story in "The Jungle Books". It is the tale of a little mongoose who defeats two cobras.
15. Which author is Kipling referring to when he writes "He had 'jazzed' the motif of the "Jungle Books" and, I imagine, had thoroughly enjoyed himself"?

He was referring, of course, to "Tarzan of the Apes". Kipling himself was inspired in a way by something he had read in childhood. "...a tale about a lion-hunter in South Africa who fell among lions who were all freemasons, and with them entered into a confederacy against some wicked baboons. I think that, too, lay dormant until the "Jungle Books" began to be born." (This, and the above quote, from "Something of Myself", 1937).
Source: Author agony 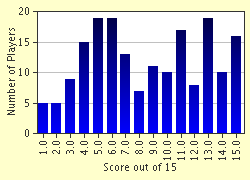