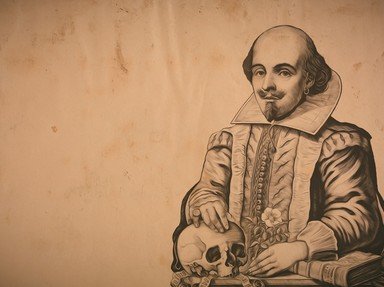 A Shakespeare play is described in a few words. Can you identify it and match it to the correct title?
This is a renovated/adopted version of an old quiz by author ravenskye

The fairy king and queen are Oberon and Titania, while Puck is the character who causes chaos by causing lovers to fall for the wrong partners. The plot involves a young woman Hermia, who refuses to marry the man chosen for her by her father. Having confided in her friend, Helena, she runs away to the woods with her chosen man, Lysander, followed by Helena and Demetrius, who also believes himself to be in love with Hermia.

Puck causes mayhem to all the characters, who also include a group of manual workers who are rehearsing a play. He gives one of these men, Nick Bottom, the head of a donkey and enchants Titania to fall madly in love with Bottom. Eventually, all is resolved and the couples end up reunited with the partners they should be with.

Among the famous quotations from this play are 'the course of true love never did run smooth' (Lysander) and 'Lord, what fools these mortals be!' (Puck).
2. Asking for demonstrations of love leads to the deaths of three daughters

In his old age, King Lear decides to divide his kingdom between his three daughters, Regan, Goneril and Cordelia. Before doing so, he asks each of them to prove their love for him before the court. Regan and Goneril do so, but Cordelia refuses, as she feels her love for her father is demonstrated in actions, not words.

Lear soon discovers the falsity of the other two daughters' declarations, when they refuse to let him stay with them and loses his mind during a wild storm, while still having enough wits to realise Cordelia was the only faithful daughter. By the end of the play, Goneril has poisoned Regan and then kills herself. Cordelia has been executed leading Lear to die from grief. Inevitably, being a Shakespearean tragedy, there are other deaths - lots of them.

The 'thankless child' expression comes from 'King Lear': 'How sharper than a serpent's tooth it is
To have a thankless child! '.
3. Italian businessman borrows money and struggles to repay it


Answer: The Merchant of Venice

The merchant, Antonio, is asked by his friend Bassanio to borrow money from Shylock so that Bassanio can use it to pursue the heiress, Portia. Antonio is expecting his ships to bring goods, giving him the funds to repay the loan, but news comes that the ships have been wrecked. (Shakespeare is fond of shipwrecks in his plays).

The security for the loan is a pound of Antonio's flesh. Portia, now married to Bassanio, dresses as a man and acts as Antonio's lawyer, pointing out that Shylock has no right to shed Antonio's blood, so cannot collect his security. The case is dismissed, leaving Shylock ruined financially and personally. By the end of the play, Antonio's ships have returned safely after all.

The play has an anti Jewish tone, which does cause some discomfort in these mostly more enlightened times. Apart from the 'pound of flesh', the play has also given us 'the quality of mercy is not strained', both of which have passed into common usage.
4. Shipwrecked twins believe one another dead. A steward wears yellow hose.

'Twelfth Night' involves some of Shakespeare's favourite plots, including a shipwreck, mistaken identity and cross dressing. Viola and Sebastian are the twins, separated following a shipwreck and believing him or herself to be the only survivor. Viola dresses as a boy, obtaining a post working for Duke Orsino who sends him (really her) to woo Countess Olivia on the duke's behalf. The countess falls for Viola, who has herself fallen in love with the duke, but Sebastian's return solves the problem - he marries Olivia and Viola marries Orsino.

The yellow hose come in when Olivia's steward, Malvolio, is tricked into believing Olivia is in love with him and wants him to dress in that way. He ends up imprisoned as a madman, taking the joke rather too far.

If you've heard the expression 'some are born great, some achieve greatness and some have greatness thrust upon them', this is the play in which it originates.
5. Man tries to trick women out of their money, but they outsmart him

Falstaff had proved such a popular character in the history plays about Henrys IV and V, he was brought back to be the main character in 'Merry Wives of Windsor'. Finding himself short of funds, Falstaff sets out to seduce the married women Mistress Page and Mistress Ford, both of whom have rich husbands. He sends them identical letters which, being friends, the two women soon compare, discovering his ulterior motives.

Between them, they set up various humiliations for Falstaff, who eventually realises he has been plotted against, rather than being the plotter, and accepts he has deserved the treatment meted out to him.

Probably the best known quotation from this play is 'the world's mine oyster'.
6. Wife obedience test


Answer: Taming of the Shrew

This might be the shortest clue, but it should be enough to remind you of the play, where the 'shrew', or Katherina, proves herself an obedient wife to Petruchio at the end of the play. To wind back to the beginning, Katherina's younger sister, Bianca, wishes to marry Lucentio but the older sister must be the first to settle down. Petruchio matches Katherina's verbal wit and the two marry, with Petruchio mistreating her - withholding food, for example - until she behaves as a dutiful wife.

The sub-plot about Bianca's suitors adds to the general mayhem but all is resolved at the end, one assumes to everyone's satisfaction. To modern eyes, the 'taming' seems barbaric in parts and demeaning to women, but it was written over 400 years ago and is meant to be a comedy. My hope is that Katharina continued to give Petruchio a hard time.

'Why, there's a wench! Come on, and kiss me, Kate' inspired the title of the 1948 musical based on the play, called just 'Kiss Me, Kate'.
7. Magician is exiled to an enchanted island

The magician is Prospero, who is the rightful Duke of Milan, supplanted by his brother Antonio and exiled to an island in the Mediterranean Sea. His daughter lives with him along with the slave, Caliban, and the spirit Ariel. Prospero seizes the opportunity to create a storm, which causes his brother along with the King of Naples, the king's son, Ferdinand, and other characters to be shipwrecked on his island. Naturally, they are on different parts of the island, so each believes himself to be the only survivor.

After various misunderstandings, Ferdinand and Miranda fall in love, Prospero is restored and Ariel is set free.

Aldous Huxley took the title of his novel 'Brave New World' from 'The Tempest. The full quotation comes from Miranda's delight at seeing men other than her father - 'O brave new world, That has such people in't'.
8. Father dies, mother dies, uncle dies, girlfriend dies, girlfriend's father and brother die

I could have added 'he dies' to the clue, but I suspect you've already worked that out. The play begins when the character Hamlet sees the ghost of his father, also named Hamlet, and learns that his uncle murdered his father. His attempts to gain revenge lead to multiple deaths - his mother Gertrude dies from (accidental) poisoning, his uncle Claudius, who has usurped the throne, is stabbed by Hamlet while Ophelia, his girlfriend, loses her sanity and drowns Ophelia's father, Polonius, is accidentally stabbed (Hamlet again) and her brother, Laertes, dies from a poison tipped sword having mortally wounded Hamlet with the same sword.

Two other characters, Rosencrantz and Guildenstern, meet their deaths, due to Hamlet's plotting, to add to the overall death toll. You won't be surprised to learn this is one of Shakespeare's tragedies rather than a comedy.

Where to start with quotations from 'Hamlet'? 'To sleep, perchance to dream', maybe, or 'neither a borrower nor a lender be' might remind you of the debt we owe to Shakespeare.
9. Deformed ruler disposes of nephews

Shakespeare's play has coloured the perception of Richard III as being evil and determined to become king of England no matter what. History tells a different tale, though. While the nephews did die in the Tower of London, and Richard certainly benefitted, there is no evidence of their actual fate. However, according to the play Richard killed off several obstacles to taking power, including his own brother, Clarence along with the aforementioned nephews and his own wife.

His reign does not last long though, as he is destined to die in the Battle of Bosworth at the hands of Henry Tudor, who succeeds Richard as Henry VII. This part is mostly true, although Henry is unlikely to have delivered the blows which killed Richard, who probably didn't say 'a horse, a horse, my kingdom for a horse' either.
10. General is convinced of wife's infidelity by his ensign, leading to murder and suicide

The ensign is Iago, overlooked by Othello for promotion and consumed by anger. Often described as Shakespeare's most manipulative villain, Iago convinces Othello that Desdemona, Othello's wife, is having an affair with Cassio - the man who gained the promotion Iago was expecting. On the flimsiest of evidence, Othello believes Iago's lies and murders Desdemona, before killing himself.

The wounded Iago is arrested, but not before killing his own wife who has exposed his devious scheme. The falsely accused Cassio takes over from Othello as governor of Cyprus and is also given the responsibility of deciding Iago's fate. We are left to imagine what that might be, though.

Othello describes himself as 'one who loved not wisely, but too well' in his final scene.
Source: Author rossian