The Elliots of Kellynch-Hall Trivia Quiz

This is another quiz on Jane Austen's "Persuasion", this time on the Elliot family. Good luck and have fun!

Quiz Answer Key and Fun Facts
1. Lady Elliot shares a first name with one of her daughters. Which one?

I believe that the practice of naming the eldest daughter after the mother was fairly common. It is interesting that Elizabeth does not resemble her mother at all.
2. How many children total did Sir Walter and Lady Elliot have?

They had Elizabeth, Anne, a stillborn boy, and Mary. The boy is only mentioned in the Baronetage at the beginning of the novel.
3. What year did Mary and Charles Musgrove marry?

Sometimes it is interesting to specualate on why she married him at all! They have two children, Walter and Charles.
4. What are the names of the three Elliot sisters, from oldest to youngest?

Mr. Elliot is Sir Walter's nephew. He is not always on good terms with his uncle.
6. Where were the Elliots first settled?

This comes from the entry in the Baronetage. Makes me think of the Chesire Cat!
7. Where is Lady Elliot at the beginning of the novel?

She died in 1800 when Elizabeth was sixteen, Anne fourteen, and Mary nine.
8. How old was Anne when she was first engaged to Captain Wentworth?

She was nineteen in 1806. She is twenty-six, seven years later, when the novel takes place.
9. Which daughter is most like Sir Walter?

Elizabeth is most like him in her pride and fear for the family name. She wants to be well connected.
10. Which daughter is like their mother, Lady Elliot?

"None so right, none so capable as Anne!" Anne is like Lady Elliot, especially in the eyes of Lady Russell, the old family friend. She is the only one with her mother's good tastes and elegance.
11. What is Sir Walter's serious flaw?

We can only wish that he was a miser. In fact, he is the exact opposite. There is no real evidence for his being a glutton or having a bad ear, although both are possible.
12. Where do the Elliots relocate?

They go to Bath because London is too expensive.
13. How many Elliots are, have been, or will soon be married by the end of the novel? (Count widowers.)

Elizabeth was born in June, and Mary and the still-born son were both born in November.
15. And finally, a give-away (I hope): Which Elliot daughter is our heroine?

If you answered anything else, I'm a little bit scared!
Source: Author maureenee 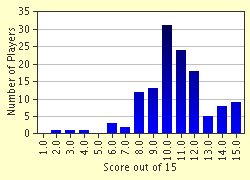 
Other Destinations
Explore Other Quizzes by maureenee