This film is constantly played in my home, as my kids absolutely love it! After watching it endless times I began noticing all the smaller details, just to keep myself entertained. Test yourself with this quiz, and see what details you can remember.

Quiz Answer Key and Fun Facts
1. When the dentist went to the toilet with a 'Readers Digest', how long did Peach say that the fish had to execute their escape plan, before he returned?

Nemo followed Gill's escape plan and swam into the filter and lodged a small pebble into the fan to stop it rotating. The first time Nemo tried, the pebble came away from the fan and sucked Nemo back into it, as he wriggled through the pipe, trying to return to the main fishtank.
2. What was the name displayed on the camera that one of the divers used to take a picture of Marlin?

Marlin was stunned by the bright flashlight, when one of the divers took a picture of him on the reef, using a yellow camera.
3. What was the name of the dentist's receptionist?

The dentist asked for Barbara's help a few times during the film, including asking her to leave an early appointment open for him so he could clean out the fish tank.
4. When Marlin and Dory gave their speech at the sink during the 'Fish are Friends' meeting, what word was labelled on a drawer behind them?

The sharks' meeting took place inside a sunken submarine. When Marlin was in the middle of telling the sharks a joke, he spots the diving mask that fell off the boat that took Nemo away earlier.
5. What answer did Dory give, when the school of silver fish made an impression of an octopus?

The fish gave Dory a few clues of what they were doing an impression of, including saying that it had eight legs. Even with such an obvious clue, she still gave a wrong answer. The fish replied "Close enough!"
6. What was written on Darla's purple sweater, when she arrived at the surgery for her appointment?

The dreaded Darla arrived for her appointment in a purple sweater and yellow and black checked skirt. The screeching 'Psycho' anthem was played during her entrance.
7. Which of the the following names did Dory NOT use when referring to Nemo?

Dory had a vey bad memory and never got Nemo's name right, prompting Marlin to correct her everytime.
8. When Nemo was placed aboard the boat, what colour was the container that the dentist put him into?

Nemo was placed into a red coolbox. As this happened the boat jerked sharply and the dentist knocked his diving mask into the sea. This was a piece of luck for Marlin, as without the address that was written on the mask, he would of had no way of knowing where Nemo had been taken.
9. On the dental surgery wall near the window, which animal was shown on a poster, advising patients to 'Floss'?

The poster read, 'For a bite that counts, Floss'. It showed a green crocodile with its mouth open wide, revealing lots of pointed white teeth inside.
10. What colour was the wetsuit of the diver who took a picture of Marlin?

The diver that captured Nemo wore a black and lime green wetsuit, and the diver who took Marlin's picture wore black and royal blue.
11. When Bloat and Gurgle argued about whether the dentist was using a Hedstrom File or a K-Flex on a patient, what fact did Bloat give to back up his point of view?


Answer: "It's got a teardrop cross section."

All of the fish in the tank had become experts in dentistry techniques, as they watched the dentist treating patients every day. Even Nigel knew a bit about dental procedures, and frequently popped in to have a look at what was going on in the surgery.
12. When the Aquascum 2003 scanned the fish tank, what did it announce the water temperature to be?

Gill's escape plan was brought to an abrupt halt, when the fish woke up one morning to see that the dentist had installed a new high tech filter. The new filter took the water temperature and PH reading every five minutes.
13. What word came next on the sign that was beside the human skull ornament in the fish tank? 'Didn't _____.'

There were many interesting ornaments in the fish tank, including a sunken ship, tribal statues, barrels filled with gold coins and of course the skull, which had a patch over one eye socket and a gold tooth.
14. How many men were aboard the fishing trawler, when the net caught Dory, along with all the grey fish?

Just when Marlin found Nemo and all seemed well, a large fishing net was dragged through the sea, catching Dory, along with a school of other fish. Nemo was small enough to swim through the gaps in the net and help all the fish escape, by instructing them all to swim down together.
15. What colour was the baby fish, that bounced off the sponge beds and started to cry, after Marlin told Nemo to go and play there?

Nemo wanted to go and play with his new friends but Marlin told Nemo that he would feel better if Nemo played on the sponge beds.
"That's where I would play." said Marlin.
Source: Author halzer 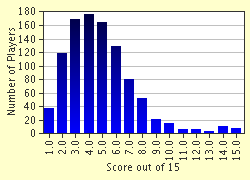 Related Quizzes
This quiz is part of series My Favorite Disney Movies:

Do you love Disney movies? If So, then try these quizzes!


Other Destinations
Explore Other Quizzes by halzer