Woody Allen's film career is one of the glories of the American Cinema. How much do you know about him and his work?

Quiz Answer Key and Fun Facts
1. In 1965, Allen wrote and appeared as a supporting player in an all-star farce. Which was it?

2. There is a foreign filmmaker that Woody Allen respects above all others. Do you know who he could be?

3. In 1989, Allen made 'New York Stories' with another two directors. Who were them?

His short story was 'Oedipus Wrecks'.
4. In which of his black and white films did Madonna appear?

5. One of Allen's favorite actresses is Diane Wiest. On one of the following movies she doesn't appear. Which is it?

It was a movie for television, aired on ABC Television Network.
7. What is the name of the character played by Mia Farrow in 'The Purple Rose of Cairo'?

Also called The Human Chameleon.
9. In which film did Woody Allen and Diane Keaton re-unite again?

10. In 'Manhattan', Allen played a successful comedy writer. Do you remember the name of his character?

11. 'Interiors' tells the story of how many sisters?

They were played by Diane Keaton, Marybeth Hurt and Kristin Griffith.
12. In 'Alice' (1990), Mia Farrow is the wife of a very rich businessman. Who played it?

13. In 1992, Allen made a film using a handheld camera, almost experimental in its cinematography. Which was it?

14. Allen filmed a pastoral romantic comedy in the summer of 1981, featured by him and Mia Farrow at the beginning of their extraordinary association. Which was it?

15. Woody directed Sharon Stone in a brief early moment of what film? 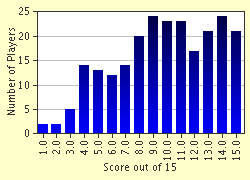 
Other Destinations
Explore Other Quizzes by mpc