You think you know everything about the movie 'Bring It On'? Well don't be so sure until you take this quiz! Made by Maria and Julie! Together we have seen this movie more than 30 times!

Quiz Answer Key and Fun Facts
1. Which member of the Toro's squad has a tattoo on his or her back?

You can see Jan's tattoo during the car wash scene. It is a large tattoo on the upper middle of his back.
2. When is the only time they use the phrase 'Bring it on!' in the movie?


Answer: Before the football game when the 4 football players are talking.

When Torrance brings the check to the Clover's gym they don't actually say 'bring it on', they only say 'bring it'. The football players say this before the game, starting a fight.
3. What move do the Clovers and Toros do that would normally be illegal in a high school cheerleading competition?

A 'fly over' is when a a person is flipped off a pyramid and lands in another. The Toros and Clovers both do this move at Nationals.
4. Finish this quote from the movie: Missy: 'Are you trying to tell me you speak fag?' Les: 'Oh, _________.'

This is said during the car ride before Missy's first football game when Missy, Les, Jan, and Torrance are in the car and they are discussing the guys' sexuality.
5. Finish this quote from the movie: Aaron: 'Come on Tor, I can't mack on you in front of the _______.'

Aaron says this in the first few minutes of the movie when he comes to pick Torrance up for the first day of school.
6. Why does Aaron say college will be better than high school?

This is also from when Torrance and Aaron are driving to school on the first day.
7. Three girls on the Clovers squad are in a singing group in real life. What is the name of the group?

The group Blaque also sings the song 'As If' on the 'Bring It On' soundtrack and the music video is on the special edition movie and DVD.
8. In the movie, what are the names of the 3 girls who are in a singing group together outside of the movie?

Who would name their daughter Lafred?!
9. During tryouts a guy starts singing a song called 'Give My Regards To Broadway'. What play does he think he is auditioning for?

The original scrrenplay was written by Jessica Bedinger, but the movie was directed by Peyton Reed.
11. What city in California is Rancho Carne High School located in?

Rancho Carne High School is located in San Diego, California.
12. What is the 1st name of the actor who plays Cliff?

Cliff Pantone is played by the actor Jesse Bradford who can also be seen in 'Hackers', 'Romeo and Juliet', and 'A Soldier's Daughter Never Cries'.
13. How old was Kirsten Dunst when she made this movie?

This is the opening cheer that the whole squad does!
15. Who does this cheer? 'Rancho Carne's not all talk, all we know is Toro's rock, shake your booty, scream and shout, Toro players work it out! GO TOROS!'?

Jamie does this cheer during her tryout. This is the part where Whitney and Courtney clap loudly and then Jan makes a face with his tongue.
16. In the car-ride scene to Missy's first football game the group is discussing Les and Jan's 'sexuality'? What does Les say his sexuality is?

Here is their whole conversation: Jan: 'You know, all the cheerleaders in the world wouldn't help our football team.' Les: 'It's just sad. Cheering for them is just plain mean!' Jan: 'You know everyone just comes to see you ladies anyway.' Missy: 'Right, because we're such fine athletes.' Jan: 'Oh, live with it! You'll be fighting off major oglers, while we defend our sexuality.' Missy: 'What is your sexuality?' Les: 'Well, Jan's straight, and I'm...controversial.'
17. Who says this: 'Yes, were the ethnic festivities to your liking today?'?

Lava says this to Torrance and Missy when Missy has brought Torrance to see the stolen cheers and they are walking back to Missy's car.
18. What is Torrance's mother's first name?

Torrance's mother, Christine, is played by Sherry Hursey.
19. What are the two things the Clovers have on themselves that would be deductions in a real cheerleading competition?

In a real cheerleading competition these would cause deductions for the squad. If they actually got these deductions, how could they have gotten first place?
20. What finger does Missy use when Courtney says 'Tattoos are strictly forboden!' during her tryout?

Missy is in fact flicking her off as a comeback to her snotty remark about her 'tattoo'. She then says, 'I got bored during fourth period.'
Source: Author miapia115 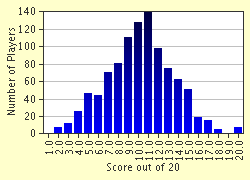 
Other Destinations
Explore Other Quizzes by miapia115

More Bring It On . Quizzes