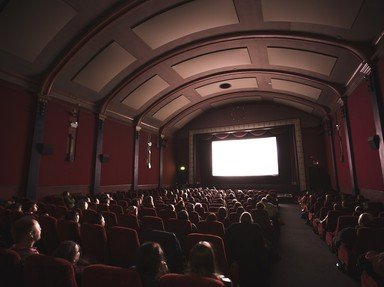 "Easter Parade": Beyond the Movie Quiz

These are trivia questions that aren't necessarily about the plot, but they're for fans who know more about the making of, and the content behind the movie.

Originally Vincente Minnelli was going to direct, but Garland's psychiatrist and a lot of others thought it would be best if he didn't. The two of them didn't work well together and would start fighting. However, Minnelli was known for helping to calm her tantrums on set in the earlier years. The man who ended up directing the movie was Charles Walters.
2. What song was cut from the film?

"Mr. Monotony" was a solo number for Garland that was eventually cut from the film because some thought it was "too risqué" for the time period, 1912.
3. Who was supposed to play Don before Fred Astaire?

Originally Gene Kelly was cast as Garland's co-star, but he broke his ankle playing touch football and had to be replaced by Astaire, who he himself suggested.
4. What was one of the problems Ann Miller had to face while dancing with one of her co-stars?


Answer: She was too tall.

In one scene, Ann Miller is dancing by herself and is wearing red high heels to match her outfit. She goes behind the curtain and is scheduled to come back out and do a surprise dance with Fred Astaire to "It Only Happens When I Dance With You". When she comes back out, she is wearing red flats instead, so that her height won't be as prominent.
5. What happened to Judy Garland while she was filming "Fella with an Umbrella"?


Answer: Dye from the hat leaked onto her face.

In the scene where Garland and Peter Lawford are walking in the rain with a big yellow umbrella, Garland is wearing a red hat with feathers coming out of it. The red dye bled on her face and jacket, so they had to resort to coating the hat with vaseline.
6. "For Me and My Gal" and "Easter Parade" share one of the same lines that a character says to Judy Garland. What is it?

In "For Me and My Gal", Gene Kelly says this line to Garland, and in "Easter Parade" Astaire's character says it to her when they're sitting at the piano.
7. When Hannah was dancing, the white feathers of her dress kept flying off. Who was this an in-joke reference to?

This dance was a joke making fun of Ginger Rogers' wardrobe malfunctions while she was filming "Top Hat" in 1935. She was dancing to "Cheek to Cheek" with Fred Astaire, wearing a dress covered in ostrich feathers. The feathers didn't work out so well, and they went flying off of her dress.
8. Where was "Easter Parade" filmed?

Metro-Goldwyn-Mayer was started in 1915, and over time became one of the top movie producers around. They claimed that they had "More stars than there are in the heavens". They were especially well known for their musicals, which they made a lot of after they realized how popular they were. Judy Garland herself appeared in many of them, including "Meet Me In St. Louis", "Everybody Sing", and most famously "The Wizard of Oz". "Easter Parade" was released in the US in 1948.
9. What was the tagline for the film?


Answer: "The Happiest Musical Ever Made is Irving Berlin's Easter Parade"

Another tagline for the film was "Full of melody! Full of young love!". "Easter Parade" is probably one of "The Happiest Musicals Ever Made" because in the end the "good guy" wins. Judy Garland finally proves herself to be an actual person in Astaire's eyes, not just a dance partner.

The good girl gets the right guy, and Ann Miller doesn't get Astaire back like she finally wants. In the end, everyone was taking pictures of Hannah walking in the parade.
10. "Easter Parade" won a Writer's Guild of America Award for "Best Written American Musical". What was the other award it won?

In 1949, "Easter Parade" won the Oscar for their outstanding songs by Johnny Green and Roger Edens. Some of the songs include "Drum Crazy", "Happy Easter", "I Want to Go Back to Michigan", "It Only Happens When I Dance With You", "A Fella with an Umbrella", "I Love a Piano", "Snooky Ookums", "A Couple of Swells", "Steppin' Out with My Baby", and of course "Easter Parade".

This quiz was reviewed by FunTrivia editor Polaris101 before going online.
Any errors found in FunTrivia content are routinely corrected through our feedback system.
Related Quizzes
1. Encanto (2021) Easier
2. "The Expendables" - The Cast Average
3. "Encanto" Character Gifts Average
4. Evil Under The Sun Average
5. "The Expendables 2" - The Picturesque Cast Average
6. Bruce Lee's "Enter the Dragon" Average
7. "The Englishman Who Went Up a Hill..." Average
8. Elvira, Mistress of the Dark Average
9. Employee of the Month Average
10. Edge of Tomorrow Average
11. "Educating Rita" (1983) - Sculptures of Limitation Average
12. "The Expendables" - The Details, Pt. 1 Average


Other Destinations
Explore Other Quizzes by keh1121