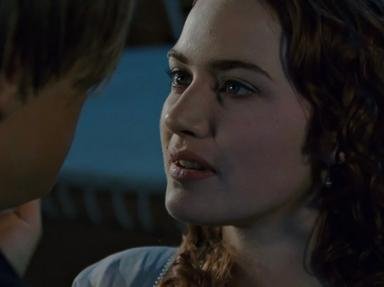 Sure...she'd NEVER let go; he was king of the world; their hearts would go on. James Cameron's 1997 film "Titanic" was mega-popular, but can you remember these moments where the film simply overdid it? *SPOILERS*

Quiz Answer Key and Fun Facts
1. The framing narrative of "Titanic" involves a group of scientists visiting the wreckage of the ill-fated ship on the Atlantic sea floor. Where do they find the image of Rose?


Answer: Locked in a safe

Searching through the wreckage of the largest passenger cruise liner then-built, a research crew, on the sea floor in their pressurized compartments, sends a probe out into the ship to search for artifacts both rare and hidden. When they somehow manage to unearth a safe hidden beneath a painting in the very first first-class apartment they stumble upon, research captain Brock Lovett is unreasonably disappointed with the results, later discovered, as it turns out, to be a perfectly-preserved image of a nude woman posing with 'The Heart of the Ocean', a valuable diamond necklace.

Somehow, this nude image from 1912, locked in a muddy vault for going onto a century, makes it onto the five o'clock news in perfect form and...get this...the subject of the painting, Rose, calls in (by satellite phone) to step forward.

Okay. So as if we haven't defied all odds yet, the actual Titanic story hasn't even started at this point. Rose opts to tell her story in full-- mainly for dramatic and nefarious reasons all her own. Sneaky, old woman.
2. Jack ended up receiving his tickets for the ship in a card game by landing a full house (remember this movie's fascination with defying all natural odds). Where did he make the ecstatic statement: "I'm the king of the world"?


Answer: The bow of the ship

As Rose tells it, Jack arrived on the ship in a bit of a rush, winning the tickets for the Titanic in a card game five minutes before the departure. Sure, the tickets were for third class (those cretins), but they were sending him to America.

As it turned out, Jack was an artist, and like any artist he had a flair for the dramatic it seemed. Standing on the bow of the ship with his friend Fabrizio he decided to swing to the very front of the ship while spying the dolphins out front and shout out "I'm the king of the world!" No drama there.

Rose boarded the ship in first class (she knew how to travel) but, as it turned out, she was the most miserable wretch of the lot. Sparing no detail in her story, Rose claims that she was sick of the same, old mindless chatter and banality that she was standing on "a great precipice with no one to pull her back". Heading to the stern (coincidentally where Jack was) she pulled herself over the edge of the deck barrier and prepared to leap into the North Atlantic. What rebellion!

Employing some chit-chat, Jack saved her by promising to jump in to save her (and, you know, convincing her of her immaturity). While attempting to pull her over, however, she slipped, catching her high heel on the hem of her dress. Vowing he wouldn't let go, he saved her life and became a temporary hero.

Little did they know, the ship would be sinking anyways, so really she'd be in the water in only a matter of time.
4. In a bold move, Rose asked Jack to paint her in nothing but what?

The Jack-Rose pairing turned out to be a bad one-- at least to everyone except Molly Brown, who seemed to revel in the possibility of chaos between the unhappier couple (Rose and Cal). After a couple of carefree nights, the fateful day finally arrived and Rose, feeling a bit daring, decided that it was high time to let Jack draw her in the nude (which seems like the type of thing you do after a couple of days on a boat in the 1910s). She insisted that she wanted him to draw her in nothing but the Heart of the Ocean which, to be fair, could probably pay for several dozen outfits on its own. Cheekily, she paid a dime for it, because nothing could make the situation awkward. After, she opted to leave the sketch in the room's safe-- the safe that other people would have access to-- because nothing would be more tactful than spending another few days on a cruise liner with your enemies. Cal, of course, opens the safe a short time later and finds it.

But come on. How passive-aggressive.
5. Rose and Jack were the masters of being at the right place at the right time. Did they ever get to see the iceberg as it collided with the ship?

Nothing to hide (well, except everything), Rose and Jack fled into the bowels of the ship, stowing away in the cargo hold and heating up the inside of a car. Inevitably, they made their way topside just in time to avoid capture by hapless Titanic security staff. Racing to the deck Rose vowed to leave the ship with Jack-- not Cal-- and they kissed ferociously, actually attracting the attention of several noteworthy staff members who really needed to bide more of their time staring out into the open sea. They virtually failed to notice the giant iceberg dead ahead and, despite all efforts to steer clear, it was too late.

Talk about a horrible interruption. Rose and Jack, both on the deck, had to break off their extended make-out session to avoid having some blocks of ice crash down upon them; they witnessed the collision first-hand, which is coincidental since, after all, we've been following them for the bulk of the film.
6. When the Titanic started to sink, Rose decided to save Jack, imprisoned by Cal elsewhere on the ship. Where was he taken?

As if there weren't more important things to be done, Cal staged a phony robbery to get Jack placed in the master-at-arms' office on E Deck, handcuffed to a pipe for 'safe-keeping', while everyone else started the evacuation process, loading into the (not-enough-)lifeboats. Rose made a fuss by dramatically leaving her mother behind (then again, her mother WAS a piece of work), hopping into an elevator, and dropping herself to the rapidly-flooding E-deck. Heading back up to D for an axe, she returned to free him (by closing her eyes and swinging blindly at the cuffs.

And all of this could've been avoided had she just believed that he didn't steal from the safe the entire time she was with him...or that Cal was a bit of an idiot. Not taking it back, I guess.
7. Which of these men did not dramatically go down with the ship?

Cal, furious with Rose for leaping out of the lifeboat in an absolute lapse of logic, decided to chase after them with a gun (which probably wasn't a great way to say goodbye to the woman carrying your priceless jewelery). The situation set Jack and Rose back an awful lot of valuable time (as they nearly drowned a few times in the lower decks of the ship) but it ultimately gave them a chance to run into Mr. Andrews, the builder of the ship who, waiting for it to go down, decided to wait in front of the clock in the first class lounge and face the worst of it. Captain Smith did the same, locking himself into the bridge, while John Jacob Astor IV was crushed under one of the stacks as it crumbled down.

Good ol' Cal, meanwhile, stole a child and sneaked onto a lifeboat. According to Rose, he shot himself during the Great Depression. Drama queen.
8. As the ship made its final plunge, Rose and Jack staked out a prime spot on which part of the sinking ship?

Toward the end of the boat's life on the Atlantic, as water started to rush through the boat, Jack and Rose advanced to the highest-possible point which, considering the collision, ended up being the stern. Rose, once more all-too-cheekily considering the circumstances, decided it was the right time to quip that "this is where we first met." Thanks for that, Rose.

As the ship began to go down, tilting a complete ninety degrees into the air, they were able to push themselves to the (ironically) safest part-- the guardrail on the stern-- where they waited with the ship's chef to make the final plunge...which they did, managing to evade the undertow in the process. But heck-- right place, right time again. Why not?
9. Bobbing around on a door in the North Atlantic, Jack and Rose survived the sinking of the Titanic. As they slowly succumbed to hypothermia, Rose promised Jack that she would "never let go". Did she let go of him though?

She meant that she would never let go of life as she let his lifeless body sink.

After the ship sunk out of sight, only to reappear in a final flashback, Jack and Rose floated like corks in the frigid waters of the ocean, quickly finding a free piece of detritus-- an entire door. Seriously. No one else found the door. As Rose climbed on, Jack gave her a quick speech about growing old and dying in her bed before they vowed to each other that they would never let go. The promise was short-lived. As the water froze Jack to death, Rose let him go, dropping him into the sea like a stone, before snagging a free whistle and shrilly alerting passing lifeboats.

At least Jack kept HIS promises.
10. Opting for one last dramatic moment, Rose, in her old age, decides to drop which of these into the sea?


Answer: The Heart of the Ocean

Rose finishes her story in the present day and calls off all attention to the fact that she may, in fact, have the Heart of the Ocean in her possession. In fact, by the end, everyone listening is pretty much weeping at her tragic tale. She talks about how she took Jack's name, Dawson, upon arriving in New York, and that he only exists in her memory.

Fortunately, in one of her last cordial moments with Cal on the Titanic he put the jacket around her. Of course that was before he started shooting at her...but still, the jacket contained the Heart of the Ocean in the pocket. Luckily for Rose, it never fell out.

In the middle of the night, floating over the Titanic, Rose walks to the guardrail of the research vessel and, stepping up on the edge of the stern, tosses in the long-lost (but never-really-lost) Heart of the Ocean, effectively losing a sizable fortune. Smooth move, Rose.

And then (oh the nerve), James Cameron lets Celine Dion's "My Heart Will Go On" play over the credits. 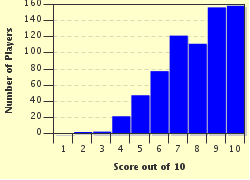 Related Quizzes
This quiz is part of series Fun with Commissions:

I didn't join a Commission in the Lounge until the 29th version, but I've been hooked ever since. This list contains not only the quizzes I have written for Commissions, but those written using my suggested titles. I had completely forgotten suggesting some of them!