Where No Woman Has Gone Before Quiz

Here are ten women who became famous when they became the first women to achieve a notable feat. They all went somewhere or did something no woman had ever done before.

Quiz Answer Key and Fun Facts
1. On May 16, 1975, Junko Tabei became the first woman to accomplish which of the following difficult feats?

After climbing Mount Fuji, and the Matterhorn, Japanese mountain climber Junko Tabei became to first woman to successfully climb Mount Everest. She and her team used the same route as that used by Sir Edmund Hillary and Tenzing Norgay when they made the first successful climb in 1953, twenty-two years earlier.

Rosie Napravnik is an elite American horseracing jockey. In 2013 she finished 5th in the Kentucky Derby, aboard Mylute. At that point she only the 6th woman to have ever ridden in the race, and finished higher than any previous attempts. The same year she went on to ride in the Preakness Stakes, where she finished third aboard the same horse.

Laura Elizabeth Howe Richards and her sister Maud Howe Elliot were the first women to win a Pulitzer Prize. They won the award for a novel entitled "Julia Ward Howe" which was a biography of their mother, who herself was famous for writing the words of "The Battle Hymn of the Republic". Laura Richards had over 90 different works published, most of which were biographies and children's books.
4. In 1987, which of the following American singers became the first woman to be inducted into the Rock and Roll Hall of Fame?

Born in Memphis, Tennessee in 1942, Aretha Franklin earned many accolades during her career. In 1987, she became the first woman to be inducted into the Rock and Roll Hall of Fame, which had opened five years previously. Rolling Stone magazine listed her in first position in their list of "100 Greatest Singers of All Time".

This "Queen of Soul" has had numerous number-one hits and her powerful voice can be heard on many R&B stations belting out songs such as "Respect" (1967) and (You Make Me Feel Like)"A Natural Woman" (1967).
5. What was the name of the first woman in space?

Revered and honored as a hero in her home country of Russia, Valentina Tereshkova is the first woman to fly in outer space. Also, since she had only been given an honorary induction into the Soviet Air Force, she was the first civilian to fly in space.

Her three day mission was deemed successful because she made it back alive and collected data about the effects of space travel on the female human body. As a young woman she was involved in skydiving, and it was this hobby that led to her selection as a cosmonaut.

The other choices are all Russian opera singers.
6. In 1872, Victoria Woodhull became the first woman to run for the office of United States President.

With her movie "The Hurt Locker" (2008) Kathryn Bigelow became the first female movie director to win all four of these major awards for a single movie. She was also the first female to win the Saturn Award for Best Director, when she won it for her 1995 movie "Strange Days". Some of her other successful movies have been "Point Break (1991), and "Zero Dark Thirty" (2012).
8. For which sport did English athlete Charlotte Cooper became the first woman to win an Olympic Gold Medal?

Charlotte Cooper became the first woman to win a modern Olympic Gold Medal when she defeated Frenchwoman Helene Provost at the 1900 Summer Olympics in Paris. She also won the Olympic Gold Medal in the Mixed Doubles competition. She also won five Wimbledon Championships, and played competitively well into her fifties.
9. In 1993, Avril "Kim" Campbell (from British Columbia) became the first woman to become which of these?

On June 4th, 1784, Elisabeth Thible, dressed as the Roman goddess Minerva, became the first woman to ride aboard in a hot air balloon. This achievement was done in the city of Lyon, France, in the presence of Swedish King Gustav III, aboard a balloon name "La Gustave" in his honor. During the ascent and 45 minute flight Madame Thible sang opera while in costume.

The flight went four km (2.5 miles)and reached a height of approx. 1,500 meters (5,000 ft.), major accomplishments at a time when the idea of human flight was still a dream. Very little else is known of this brave woman.
Source: Author dcpddc478 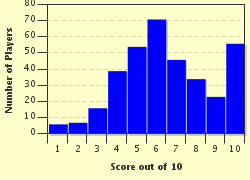 Related Quizzes
This quiz is part of series Commission #30:

Stop yourself and go complete some quizzes! This Commission in the Author's Lounge-- the thirtieth!-- launched in October 2013 and featured titles containing the words 'Stop' and 'Go'!