He's Just Not That Into You Trivia Quiz

Ginnifer Goodwin, Justin Long, Bradley Cooper and Scarlett Johansson were among those who starred in this cute movie from 2009.

Quiz Answer Key and Fun Facts
1. What happened to Anna at the grocery store, after Ben let her go ahead of him in line?


Answer: She won a cooler.

Ben was in line but still trying to decide on a pack of gum when he offered to let Anna in front of him. She agreed and ended up winning a cooler because she was the 1000th customer that month. Outside, while Ben and Anna were chatting, Ben said someone in his office could help Anna with her singing career.

As she was writing down her phone number for him, he admitted to her that he was married. They agreed there wasn't anything wrong with him giving her his card so he could help her professionally.
2. How did Gigi end up meeting Alex?


Answer: She went to the bar he managed, in order to run into Conor.

Gigi had a date with Conor, then worried about why he never called her. Since he had mentioned that he went to the City Supper Club, she went there to accidentally bump into him. Once there, she met Alex, the club's manager, who said he knew Conor. Alex assured Gigi that Conor wasn't going to call her, and explained that she was the rule rather than the exception when it came to interpreting signals from guys to see how interested they really were.
3. Janine suspected that Ben was lying to her after she found cigarettes and an ashtray outside their home.

Ben and Janine were having their home remodeled and the workmen had neglected to cover their table. Janine went out back to get a tarp and found a pack of cigarettes, along with an ashtray. When Ben came home, she accused him of smoking again, and reminded him that her father had died of lung cancer. Ben asked why she accused him when they had a lot of workmen in the house all day. Janine apologized to Ben, and later questioned Javier, the workers' supervisor, who denied that his guys were smoking.
4. What prompted Beth to question Neil about why they weren't married?


Answer: Discussion of her sister's wedding

Beth and Neil had been together for seven years, weren't married, and had no plans to marry. When Beth brought up her sister's wedding, Neil mentioned that marriage was important for some people, but he didn't feel it necessary as he was fully committed to Beth.

After hearing what Gigi had been told by Alex, Beth went home and asked Neil if they were ever going to marry, believing that if he loved her and had wanted to marry her, he would've done it already. Neil didn't answer her, so they broke up and Neil went to live on his boat.
5. To what movie did Gigi compare her situation with Alex?


Answer: Some Kind of Wonderful

After Alex explained to Gigi about Conor initially, she kept calling Alex each time she met a guy to tell him what had happened and see what he thought. She usually misread the signs, but Alex would correctly tell her that the guy wasn't interested or wasn't going to call. One night while watching "Some Kind of Wonderful", Gigi had an epiphany of sorts.

The next day she went in to work and told Janine that the movie explained her situation. She likened herself, Alex and Conor to Eric Stoltz, Watts and Amanda Jones from the movie.

She thought Alex was trying to help her find a guy, but he actually liked her himself. Gigi stayed after everyone had left Alex's party because she thought she had him figured out, but was rebuffed after she kissed him.
6. Anna was an aspiring singer, but what other work did she do?

Ben at first told Anna he couldn't have any contact with her, but then changed his mind and said he'd get her in touch with someone who could help her with her singing. After they had a meeting at his office, Ben went to one of Anna's yoga classes, but he still resisted his attraction to her.

It wasn't until after Janine's accusations about him smoking that he began an affair with Anna. Anna thought Ben was going to leave his wife for her, but her perception changed while spending time in his closet after Janine showed up unexpectedly at his office.
7. When Alex showed up at Gigi's apartment after her date had left, what excuse did he initially use for being there?


Answer: He had her pen.

When Gigi first met Alex, the only excuse she could come up with for needing to see Conor was to say he forgot his pen. Alex saw that the pen advertised a dentist, who he knew wasn't Conor's dentist. After Alex rebuffed Gigi the night of his party, she told him that she might over analyze signals from men, but she was more open to love, and closer to finding love than he was.

He began to realize that he did have feelings for Gigi, and sort of turned in to her by constantly checking his phone for calls and thinking about her all the time.

He admitted as much, and Gigi reminded him that someone had told her she shouldn't think she would be the exception to the rule. Alex said that she was his exception, and they kissed.
8. Janine asked Ben for a divorce right after he told her he was sleeping with someone else.

Janine and Ben were at Home Depot looking at flooring. Despite Janine not being able to tell the laminate from the real wood flooring, she still insisted they should pay more to get the real wood. She said the laminate was lying to her, pretending to be something it wasn't. Ben chose that moment to be honest and tell her he was sleeping with someone else. Janine was upset by the news, but said they would work it out.

She was more upset about the question of whether he was smoking or not, which she brought up again.

They began to work on their relationship (even though Ben was still seeing Anna), but Janine later found a pack of cigarettes in Ben's clothing and knew he'd been lying to her. Ben came home later to find a carton of cigarettes, along with a note from Janine which said she wanted a divorce.
9. Where did Beth find her engagement ring?


Answer: In the pocket of Neil's pants

Beth was touched by Neil helping her after her father had a heart attack, which contrasted sharply with Beth's brothers-in-law, who did absolutely nothing to help. Beth visited Neil on his boat and told him that even unmarried, Neil was a better husband than her sisters' husbands would ever be.

She invited him to move back, but said he couldn't bring his cargo pants. While unpacking Neil's things, Beth came across the pants and said she was going to throw them away. After Neil warned her to check the pockets first, Beth found a box containing a diamond ring, and then turned to find Neil down on one knee.

They were shown being married on Neil's boat.
10. How was Mary associated with Conor?


Answer: He advertised through her paper.

Mary lamented the fact, both to her friend Anna and to her coworkers, that everyone communicated by email, text, online chat or MySpace these days. She said her charm couldn't come through unless you could hear her voice. Mary, an ad salesperson for a local paper, had placed an ad for Conor's real estate business and spoken to him on the phone. Sitting in a cafe one day, Mary spied Conor sitting alone and called his cellphone number.

After divulging that she was sitting in front of him, she joined him and the two of them hit it off.
Source: Author Polaris101

This quiz was reviewed by FunTrivia editor skunkee before going online.
Any errors found in FunTrivia content are routinely corrected through our feedback system.
Most Recent Scores
Jan 20 2023 : Guest 45: 1/10
Jan 08 2023 : Guest 174: 10/10 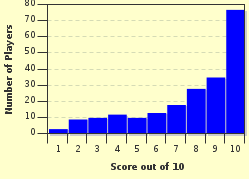