Japan has been a major pioneer for innovation during the 20th century, and its cinema is no exception. The 1950 classic "Rashomon" is one of its stand out films. Here I test your knowledge on its many intricacies.

Quiz Answer Key and Fun Facts
1. The film "Rashomon" was based on two short stories that were written by which Japanese writer, who tragically died of an overdose of barbital at the young age of 35?

The first of the two stories was entitled "Rashomon". This story considered attitudes towards thieving that directly influenced some of the issues talked about by the men as they discussed the strange story of the murder and its subsequent court hearing. The setting of the Rashomon gate in which they had these discussions also came from this story.

The outline of the murder plot in the film came from a second tale called "In a Grove", which told of a murder in the woods from various angles. In the film, this is what the woodcutter claimed he couldn't get his head around as he related his tale.
2. A true giant of world cinema was responsible for directing "Rashomon". Some of his other works included the 1961 film "Yojimbo" and the 1985 "King Lear" adaptation "Ran". What was his name?

"Rashomon" was the film that launched Kurosawa on to the world stage when it won the Golden Lion at the Venice Film Festival. Following that success, he was responsible for some of the most critically acclaimed films to come out of Japan, with the 1954 classic "Seven Samurai" becoming particularly well known. He also won the coveted Palme d'Or at the 1980 Cannes Film Festival with "Kagemusha".
3. The opening scene saw the woodcutter and the priest sitting under the Rashomon gate. They were soon joined by a commoner. Why did he join them?


Answer: To keep out of the rain

In an iconic scene, the woodcutter and priest were just sitting there staring into the rain as it lashed down on to the roof of the gate and its surroundings. It set up a strong atmosphere for the discussion that followed and set a dark tone for the challenging issues at hand.
4. When the woodcutter began to relate his tale of the bizarre events that had unfolded, what did he say was the first item that he came across before he discovered the murder?

The woodcutter was trekking through the woods going about his day job when he came across a lady's hat. Immediately sensing that something was amiss, he continued on until he found the dead body of a samurai. He then ran away in horror before reporting the incident to the authorities.

He was then asked to testify, which led to him hearing all of the evidence that was presented at the hearing.
5. The character of Tajomaru was played by Toshiro Mifune. Armed with his frightful laugh and astonishing stare, what type of role did he play in this film?

Tajomaru was captured and subsequently accused of having committed the murder. He then confessed to the crime, claiming that when he saw the samurai's wife he decided that he wanted to rape her. After separating the samurai from his wife by fooling him into believing that he had a hoard of treasure near at hand, he committed the evil deed that gave her such dishonour.

The woman then claimed that she could not continue living knowing that two people were alive who knew of her shame. The two men then had a duel in which the bandit told the court of his superior fighting prowess in overcoming a really tough opponent.
6. When the victim's wife told her side of the story, what weapon did she claim to have killed her husband with?

The wife told of how she could no longer live with her shame. She claimed that the bandit had left the married couple alone together following the incident, and as the husband was tied up he looked on his wife with such hate that she could no longer bear it. So strongly was she affected that she fainted as she plunged a dagger into the samurai's chest.

She tried to commit suicide on numerous occasions following the incident, but claimed her spirit was too strong. After being found at a temple by the authorities, she was brought before the hearing where she acted in a rather hysterical manner as she related her version of events.
7. The murder victim didn't let the fact of being dead stop him giving evidence at the inquest into his death. How did he provide the evidence?


Answer: Via a medium

In a particularly haunting scene, the medium was quite frightening as she related what the samurai had to say for himself. He claimed that following the rape his wife had decided to travel with the bandit on the condition that he kill the samurai first.

The bandit did not agree to do so and the after trying to catch the wife as she fled, he came and set the samurai free. The samurai then decided to kill himself with a dagger. The samurai was therefore the third person to confess to his murder.
8. After the woodcutter had related the three versions of the events, the commoner found out that the woodcutter was actually there, but failed to come forward with his version of events. In the woodcutter's retelling of the tale, who committed the murder?

The original account that was most closely related to the woodcutter's was the original version by the bandit. In this one he again ended up fighting a duel with the samurai, but in contrast to the heroic display of samurai skills that were on show earlier, the two fighters played out a pitiful battle illustrating a lack of skill and bravery. Somehow, the bandit managed to feebly finish the samurai off before the wife ran away in horror at the death that she had just witnessed.

In contrast to the wife's earlier tale, she freed the samurai when she had the chance. However, he considered her damaged goods and not worth fighting for. It was only when she complained bitterly of both men's masculinity that they reluctantly got into a fight to the death.
9. Following the woodcutter's final version of the tale, the three men under the Rashomon gate heard a baby cry. The commoner was the first on the scene and took something from the baby before leaving the scene. What did he take?

Following the display of thievery, the woodcutter confronted the commoner. The commoner's defence was based on his feelings that it was an opportunity, and if he didn't take the prize someone else would. The commoner then pointed out that a dagger was missing from the scene of the murder, and queried who could have possibly taken it.


Answer: He offered to bring up the baby in his family.

A lot of the dialogue within the film portrayed humanity in a negative light. The commoner in particular offered quotes suggesting that all men only looked out for their own interests. In the conflicting stories told about the murder, the emphasis was on themes such as desire, greed and dishonour. Almost everybody questioned in the court twisted the story so that they would be seen in what they believed was a more positive light.

The incident where the woodcutter offered to rear the baby turned all of this negativity on its head, and showed the priest that humanity was capable of compassion after all.
Source: Author ajwtimperley 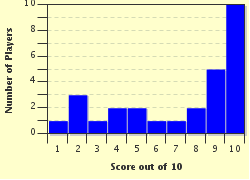 
Other Destinations
Explore Other Quizzes by ajwtimperley