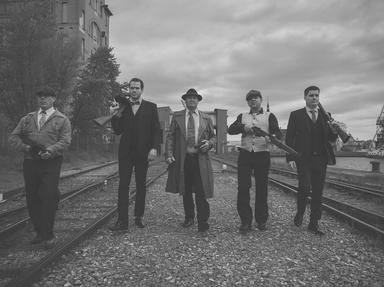 We all know about Ronald Reagan the President. But what about Reagan the actor. Some questions on some of his movies.

Share on Facebook
Share on Twitter
Share by E-Mail
Author
bigwoo
Time
4 mins
Type
Multiple Choice
Quiz #
49,701
Updated
Dec 03 21
# Qns
10
Difficulty
Average
Avg Score
7 / 10
Plays
612
This quiz has 2 formats: you can play it as a or as shown below.
Scroll down to the bottom for the answer key.

Quiz Answer Key and Fun Facts
1. In this 1951 film, Reagan plays a professor that uses an animal to attempt to prove that environment not heredity determines one's moral fiber. What type of animal does he use?

2. What was the name of the animal with which Reagan, as a professor, works in a 1951 movie? (Hint: The animal's name is in the title.)

Diana Lynn was Reagan's co-star in this movie ('Bedtime for Bonzo'). She played a lady who was hired by Reagan to work with the chimp. Of course she and Reagan were married in the end.
3. Reagan and his first lady (Nancy Davis Reagan) co-starred in what 1957 drama?


Answer: Hellcats of the Navy

Nancy of course married Reagan and soon after retired from acting to devote herself to homemaking and motherhood.
4. Ronald Reagan portrays an unscrupulous business tycoon in this 1964 film about two hitmen.

Angie Dickinson, Lee Marvin and John Cassavetes starred in this movie based on an Ernest Hemingway short story.
5. In 1940 Reagan starred in a movie about what famous Notre Dame football coach?

'Knute Rockne':All-American' may have produced Reagan's most famous role.
6. Who did Reagan portray in a movie about a Notre Dame football coach?

Pat O'Brien played the part of Rockne. Reagan played George Gipp - 'The Gipper' - Notre Dame's first All-American. This movie gave Reagan his most famous acting line, 'Win one for the Gipper'
7. In 1952 Reagan starred in another sports movie called 'The Winning Team'. What Hall of Fame pitcher did he play?

Doris Day played Reagan's loyal wife. Alexander had over 370 wins, and 90 shutouts. He played for the Philadelphia Nationals, Chicago Cubs and St. Louis Cardinals from 1911-1930. He was elected to the Hall of Fame in 1938. His career ERA was only 2.56
8. Reagan and Barbara Stanwyck starred in a film about a woman trying to protect her family's ranch. What was the name of this 1954 Western?

Archive footage of the day President Reagan was shot by John Hinckley is used in the movie.
10. A 1980s film, entitled 'Stand-up Reagan', shows some of Reagan's quips, jokes and stories he told in speeches during his presidency. True or False?

Drew Brown directed this film, which reveals why Reagan was called 'The Great Communicator' even by his political adversaries. Republicans will love this film.
Source: Author bigwoo