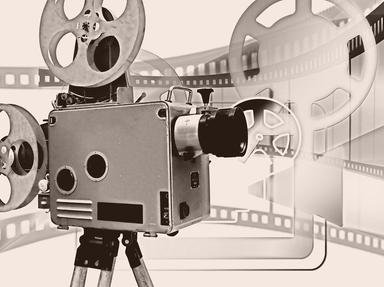 The Power of One Trivia Quiz

From the clues, guess the one word movie titles. Simple?

After "The Sixth Sense" and "Unbreakable", M. Night Shyamalan once again explored the unexplained through "Signs". The movie stars Mel Gibson as Graham Hess, a former preacher. When Hess starts seeing unusual patterns in the crop fields, he is compelled to believe there is more to this world than the things we can see, eventually leading to his discovery of extra-terrestrial life.
2. Sandra Bullock and Keanu Reeves lose control.

Director Jan de Bont's first film, "Speed" featured Keanu Reeves, Dennis Hopper, and Sandra Bullock in key roles. The plot centres on a bus carrying a full load of passengers. A bomb is placed on the bus and it's set to go off if the speed falls below 50 kmph.

The movie unexpectedly did quite well at the box office and even won two technical Oscars. This success led to a sequel, set on a cruise ship. While the ship ended up safe, the movie tanked.
3. Animated movie centred on Scottish princess, Merida.

Pixar's 2012 film "Brave" was set in the Scottish highlands. Princess Merida rebels against tradition and refuses to get married, instead wanting to make her own way in the world. This angers the other chieftains and leads to chaos. The story was written by the movie's director Brenda Chapman and turned the traditional fairytale stereotypes on their head.
4. Will Smith plays a real life boxing legend.

"Ali" is a biographical film based on the life of the legendary boxer, Muhammad Ali. The movie spans ten years of Ali's life from 1964 to 1974. The film ended on a high note with Ali winning back the Heavyweight Championship title that he had been stripped of for refusing to be drafted in the Vietnam War. Will Smith dons boxing gloves to bring Ali to life on the big screen.

He earned an Oscar nomination for his portrayal.
5. Demi Moore sways to an "Unchained Melody".

Patrick Swayze played the titular ghost in this movie. Sam (Swayze) and Molly (Demi Moore) are a much in love couple when tragedy strikes and Sam is killed by a supposedly random mugger. Sam's ghost remains on earth and ends up finding out the real reason behind his death.

In the meanwhile, he enlists the help of a medium, played by Whoopi Goldberg, to keep Molly safe. The song "Unchained Melody" featured on the soundtrack of the movie.
6. James Dean's last Oscar nominated performance.

"Giant" was based on Edna Ferber's novel of the same name. This western epic traced the lives of the Benedicts, a ranching family of Texas. Elizabeth Taylor and James Dean played the main roles. Unfortunately, Dean died in a car crash before the movie was released. He received an Oscar nomination for his performance in this movie.
7. Brad Pitt and Cate Blanchett star in a movie spanning three continents.

"Babel" was directed by directed by Alejandro González Ińárritu and featured an ensemble cast headlined by Brad Pitt and Cate Blanchett. The film cuts across events occurring in diverse locations as Morocco and Mexico, and Japan and the US, before revealing the inter-connected nature of the seemingly disparate situations. "Babel" was nominated for seven Academy Awards, though it ended up winning only one - Best Original Score.
8. Ridley Scott directed sci-fi horror film of the 70's.

Ridley Scott's "Alien" is regarded as one of the best science-fiction films of all time. A deadly extra-terrestrial being sets upon the crew of a space vehicle. The movie was critically acclaimed and also made solid profits at the box office. Its success spawned a whole franchise including various movie sequels, toys, and video games.
9. Geoffrey Rush plays pianist David Helfgott.

Of Polish descent, David Helfgott is an Australian concert pianist. The biographical film "Shine" traces the life of Helfgott from his brilliance on the stage to the anguish of his mental breakdown. Geoffrey Rush's portrayal of Helfgott earned him an Oscar for Best Actor.
10. Wesley Snipes dons the mantle of a Marvel Comics character.

Blade is a Marvel Comics superhero who is a vampire hunter. Seeking revenge for his mother's death, Blade is on a mission to kill every vampire he can lay his hands on. Blade is supposed to be a Dhampir, a creature from Balkan folklore who is half-human and half-vampire.

However, he has all the strengths of the vampire, but none of its weaknesses, giving him supernatural ability to kill vampires. "Blade" was the first in a trilogy of films centered on this Marvel character.
Source: Author zorba_scank

Go to Name the Movie Quizzes