Which "Bring It On" Movie? Trivia Quiz

This movie contains questions from all five movies: "Bring It On", "Bring It on Again", "All or Nothing", "In It to Win It" and "Fight to the Finish". Beware, this quiz contains spoilers.

Quiz Answer Key and Fun Facts
1. In which "Bring It On" movie do the rival teams compete for a chance to star in a music video?


Answer: All or Nothing

Rihanna is having a television competition where the winning team gets to star in her music video and wins computers for their school. Brittany moves from her rich and snobby high school Park Vista, where her team is competing in the competition, to a poor school, Crenshaw Heights. Suddenly, Brittany finds herself competing against her old team and friends for a chance to win computers for her new school.
2. In which "Bring It On" movie do the rival teams compete to be their school's varsity cheer-leading team?


Answer: Bring It on Again

Whittier goes to college and is very excited to join their cheer-leading squad. She soon finds out that after having to dump her boyfriend and is forced to go against her best friend that the team isn't as great as she thought. Whittier and her friend Monica then start a new team on campus. One school can only have one varsity team so the Varsity team and the "Renegades" compete against each other.
3. In which "Bring It On" movie are the rival teams forced to compete together by unlucky circumstances?


Answer: In It to Win It

The East-Coast Jets and the West-Coast Sharks are rival teams at the cheer camp Spirit Thunder. After an accident during a cheer-off each team "loses" half of their members and neither team can compete in the competition against their rival camp. The Sharks' captain, Carson, suggests that they join together and make a new routine together.

They then become the East-West Shets. Carson becomes co-captain with the East-Coast Jets' captain, Brooke.
4. Which of the following events doesn't occur in "All or Nothing" but in "Fight to the Finish"?


Answer: They start with a dream

In "In It to Win It", Carson dreams about a cheer-off between the Sharks and the Jets and a Jets guy comes in wearing a mask and turning on a chainsaw, which he throws to Brooke.

In "Fight to the Finish", Lina dreams about her team doing a cheer-off against an all-star team when her stepfather suddenly appears and pulls her away.
6. Which two movies don't take place in a high school?


Answer: Bring It On

"Bring It On" is the only movie, out of the five, where the rival team wins first place. My sister and I have a theory that because of this, the movie got bad reviews and we think that's why the last four don't end that way.
8. In which movie do the teams compete for an all-star bracelet?


Answer: Fight to the Finish

In "Fight to the Finish" the Sea Lions and the Jaguars compete against each other for an all-star bracelet. In this movie, and competition, a team's members doesn't necessarily attend the same high school so Lina combines her old squad with her new squad to form a new all-star squad.
9. Which movie reveals the main team using stolen cheer moves?


Answer: Bring It On

In "Bring It On", Missy and Cliff move from a school in Los Angeles to Rancho Carnes High School. Missy joins the cheer-leading squad but soon realizes where she has seen their moves before. Apparently, Rancho Carnes' old captain, Big Red, spied on the East Compton Clovers and used their moves for her own team at Rancho Carnes.
10. In three of the movies, the main characters form a new team. Which two movies aren't among them?

In "Bring It On Again", Whittier and Monica form the "Renegades".
In "In It to Win It", Carson and Brooke combine their teams and form the "East-West Shets".
In "Fight to the Finish", Lina combines her old squad with her new squad to form an new all-star team.
Source: Author MissVoldy 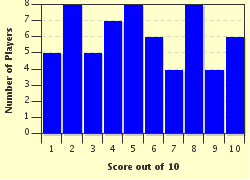 
Other Destinations
Explore Other Quizzes by MissVoldy

More Bring It On . Quizzes