"La Boheme" is the most popular opera ever written. Here some questions about Puccini's romantic masterpiece.

Quiz Answer Key and Fun Facts
1. "Scenes of Bohemian Life" was the novel which inspired the opera. Name the author of this work.

Murger's "Scenes of Bohemian Life", depicting the poverty stricken, yet joyous life of young intellectuals and artists, was very successful.
2. The setting for "La Boheme" is Paris in the 1830's. Specifically, which area, or district, of Paris does it take place in?

The Latin Quarter was so named because so many of the people who lived there were students from around the world. The only method they had of communicating with one another was with Latin, the common language of scholars in times past.
3. In Act I, we meet the bohemians: Marcello, the painter; Schaunard, the musician; Colline, the philosopher; and the hero of the opera, Rodolfo. What is Rodolfo's occupation?

Though Rodolfo introduces himself as a poet, he also writes plays and is a journalist. This is a wonderful role for tenor. In fact, Luciano Pavarotti always used this part when he debuted at a new opera house. He felt it brought him good luck.
4. The bohemians live a poverty-stricken life in a dilapidated garret. In the first act they are freezing. What do they use as kindling in order to warm themselves?

Rodolfo must have figured that his play might as well serve some useful purpose.
5. Not surprisingly, the rent on the garret is overdue. How do the bohemians handle the landlord's request for payment?


Answer: They get him drunk then throw him out

Benoit, the landlord, is plied with alcohol. The bohemians then feign shock at his supposed womanizing and literally throw him out the door. They are safe, at least until Benoit sobers up.
6. Next we meet the heroine of the opera, Mimi, a poor neighbor whom Rodolfo has never met before. She has come to the bohemians' garret for what reason?


Answer: She needs a light for her candle

Mimi is a soprano role which is very hard to fail with. Puccini gives her gorgeous music, she is a very sweet and sympathetic character, and she gets a great death scene. Who could ask for anything more?
7. Rodolfo falls in love with Mimi instantly. After first touching her hand he sings to her passionately of his life and his dreams and the new inspiration he has found in her eyes. What is this name of this aria?

"Che gelida manina" roughly translates as "what a cold little hand." Poor Mimi is always cold, which does not bode well for her longevity. This is one of opera's great tenor arias. It has passion, romance, joy and a high 'C' thrown in for good measure.
8. Next we get to learn from Mimi about her life in the aria "Mi chiamano Mimi." She reveals that Mimi is not her real name. What is her real name?

Mimi says that while she makes artifical flowers, it just makes her long for the the real flowers which will come in the spring. Also she says that while she lives in a garret, that means the first rays of spring are hers. She is a real sweetheart; you can see why Rodolfo falls in love with her.
9. "La Boheme" is so popular that it has inspired an updated rock version written by Jonathan Larson. What is the name of this long running Broadway hit?

"Rent" has been a hit around the world. Unfortunately, Mr. Larson died before it opened.
10. In the second act, which cafe do Rodolfo and Mimi go to on their first date?

This act, which takes place on Christmas Eve, is filled with joy and humor. In contrast, the next two acts are filled with bitterness and sadness.
11. True or false: While on their date, Rodolfo buys Mimi a muff for her hands.

He buys her a hat. In the final act, Musetta gives the dying Mimi her own muff to warm her hands.
12. We next meet Musetta, the former girlfriend of Marcello. Who is she with when she enters?

Alcindoro is a rich old man who is continually made a fool of by Musetta.
13. Musetta is a beautiful flirt. She still loves Marcello, however. In order to gain his attention, what does she sing?

This is one of the big hits from the opera. In the aria, Musetta describes how people admire her when she walks along the streets. It develops into an ensemble for all the assembled characters and ends with Musetta and Marcello reconciling and Alcindoro stuck with everyone's food and wine bill.
14. Which composer friend of Puccini's also wrote a version of "La Boheme"?

Leoncavallo's "La Boheme" was much more succesful at its premiere than Puccini's. Today the only opera that Leoncavallo is known for is "Pagliacci."
15. Where does the third act of the opera take place?


Answer: A gate to the city of Paris

It is early dawn and bitterly cold. A fitting scene for the action, which dwells on the serious problems in Mimi and Rodolfo's relationship, as well as Marcello and Musetta's constant bickering.
16. True or false: Rodolfo tells Marcello that the reason he and Mimi argue is because of money.

Actually, Rodolfo admits the reason behind the quarrels is his jealousy. He is also frightened about Mimi's failing health.
17. What then relatively-unknown conductor led the opera's premiere?

Toscanini, without doubt, was one of the greatest conductors who ever lived. He also led the premieres of Puccini's "La Fanciulla del West" and "Turandot."
18. Act IV takes place back in the garret. Musetta brings in Mimi, who is mortally ill. What illness does Mimi have?

Tuberculosis, or consumption as it was known then, also claimed the life of Violetta in Verdi's "La Traviata."
19. Colline bids farewell to what in his aria "Vecchia zimarra"?

Colline gives his coat to Musetta so she can sell it to buy medicine for Mimi.
20. What is the name of the director of the Broadway production of "La Boheme", which premiered in December, 2002?

Luhrman's production, which updates the opera to the 1950's, opened to excellent reviews.
Source: Author fdgla 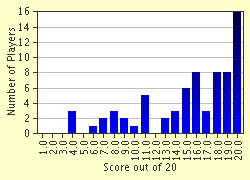 
Other Destinations
Explore Other Quizzes by fdgla