Here are some lyrics from ten of the Doors' best songs. Good luck with the quiz.

Quiz Answer Key and Fun Facts
1. Which of the Doors' best known songs has the famous line "Girl, we couldn't get much higher"?

When the Doors appeard on 'The Ed Sullivan Show', They were asked to change this line. Sullivan's producers found the line offensive. After receiving assurance from Jim Morrison that they would abide, he sang the line anyway, causing disgust for the producer and led to the group getting banned from Sullivan's show. Morrison smugly replied "So what, we already did The Ed Sullivan Show".
2. Which song has these lyrics: "Sidewalk crouches at her feet, like a dog that begs for something sweet, do you hope to make her see, you fool, do you hope to pluck this dusty jewel"?

"Hello, I Love You" was released on the group's 1968 CD "Waiting For The Sun", and was the Doors' second number 1 hit in America, after "Light my Fire".
3. What song starts with these lyrics: "You know the day destroys the night, night divides the day, tried to run, tried to hide"?


Answer: Break On Through

"Break On Through' was the first single released by The Doors.
4. How about this one: "I see your hair is burning, hills are filled with fire, if they say I never loved you, you know they are a liar"?

"L.A. Woman" was one of the last songs the group recorded with Jim Morrison. It also has the anagram Mr. Mojo Risin.
5. What song are these lyrics from: "Girl you gotta love your man, take him by the hand, make him understand"?


Answer: Riders on The Storm

"Touch Me" was from the group's 1969 CD "The Soft Parade". It was released as a single and went to number 3 on the American billboard charts.
7. In one of the Doors more famous songs, how many times do they want to be loved?

"Love Me Two Times" was from the group's 1967 CD "Strange Days".
8. How about this one "Faces look ugly when you're alone, women seem wicked when you're unwanted, streets are uneven when you're down"?

When The Music's Over" was released on the CD "Strange Days". It also has the famous line "turn out the lights".
10. Which song has the lyrics "The killer awoke before dawn, put his boots on, he took a face down the ancient gallery and he walked down the hall"?

This 10 minute epic was one of the most controversial songs the group played.
Source: Author diamondjim68 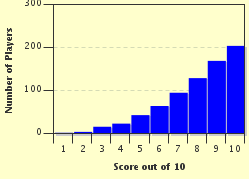 Related Quizzes
This quiz is part of series Some guy named Diamond Jim: