This is a quiz about one of my favorite classic rock songs, Pink Floyd's "Brain Damage". Note that all lyrics are based on what I hear.

Quiz Answer Key and Fun Facts
1. What album is "Brain Damage" the penultimate track on?


Answer: Dark Side of the Moon

Following its release in 1973, "Dark Side of the Moon" remained on the US Billboard album charts for almost 750 weeks. That's over 14 years!
2. Three of the verses of "Brain Damage" start off with the line "The lunatic is..." and then name a location. Which of these is not one of the places where the lunatic is?


Answer: on the moon

Each of the verses described in the question start with the first line repeated twice.
3. If you replace the audio on "The Wizard of Oz" with that of the album on which "Brain Damage" is found, which character is first seen during the song "Brain Damage"?

Playing "Dark Side of the Moon" while watching "The Wizard of Oz" yields some amazing coincidences. These include the fact that the first side of the album is the same length as the black and white sequence at the beginning, the line "who knows which is which" when the two witches are both on screen, and Dorothy going home during the line "home, home again" in the third time through the album.

Although we had read about this first, my friends and I actually tried it once to see for ourselves.
4. What's the next step after locking the door in the song "Brain Damage"?


Answer: throw away the key

The full line is "You lock the door and throw away the key." This follows the line "You rearrange me 'til I'm sane". Original Pink Floyd guitarist, Syd Barrett, battled mental health problems and left the band after their first album "The Piper at the Gates of Dawn". David Gilmour replaced Barrett on their second album, "A Saucerful of Secrets".
5. Finish the line from "Brain Damage": "There's someone in my head..."


Answer: but it's not me

This follows and rhymes with the line "You lock the door and throw away the key". Pink Floyd's follow up to "Dark Side of the Moon", "Wish You Were Here" contains references to former band member, Syd Barrett, who had suffered from mental health problems.
6. Who sang lead vocals on "Brain Damage" on the original studio album which contained the song?

Later when Roger Waters left Pink Floyd, the song was included on the live album "Pulse" where I believe Gilmour sang it.
7. One verse of "Brain Damage" has three lines that begin with "And if..." Which choice is not one of the lines in this verse?


Answer: And if the world revolves around a different sun

The last line of this verse is "I'll see you on the dark side of the moon." Although "Dark Side of the Moon" doesn't have a formal title track, "Brain Damage" serves as the de facto title track since the album title is mentioned at the end of two of the verses.
8. What song does "Brain Damage" lead into?

"Brain Damage" leads straight into "Eclipse" with no stoppage in the music. When I used to listen to the vinyl version, I was never 100% sure where one song ended and the next began. The digital tracks on the CD show it a little more clearly.
9. A band named the Easy Star All Stars covered the album containing "Brain Damage" using what style of music?

The band Phish has also covered "Dark Side of the Moon" live in concert.
10. What is the last line of the song "Brain Damage"?


Answer: I'll see you on the Dark Side of the Moon

Although there is one more song on "Dark Side of the Moon", the album ends with a heartbeat like sound and someone saying "There is no dark side of the moon. Matter of fact it's all dark."
Source: Author andymuenz 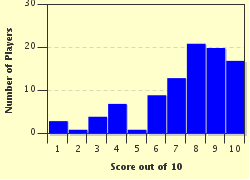 Related Quizzes
This quiz is part of series Favorites I Wrote:

Although I have over 30 quizzes online, there are some I like more than others. Here are my favorites.


1. Brain Damage Average
2. Which US President Said It? Average
3. Dr. Strangelove Average
4. United States in the 1850s Average
5. My Breakfast Through the Years Very Easy
6. Why do Fools Fall in Love? Easier
7. Hitler vs Roosevelt Average
8. You're the Leader, Partner Average


Other Destinations
Explore Other Quizzes by andymuenz