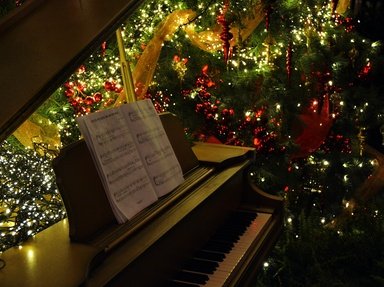 In this Editors' Advent quiz we explore Christmas songs from the Rock Era. In that time we have gone from flipping 45s after each song to creating streaming play lists. Here are just a few that have endured over the years. Enjoy!

In 1957, this song was the epitome of the crossover hit. A rockabilly number, it reached the top ten of the Billboard Hot 100 in 1957 and has endured as a holiday staple. In 2020, it ranked among the Top Ten Christmas/Holiday Digital Singles in the US.
Composed by Joseph Beal and James Boothe, (Decca advertising executives) although both Mr Helms and Hank Garland (session guitarist) disputed this saying the song they were given was "Jingle Bell Hop" and the two players changed music, lyrics, and tempo and added a bridge. They did, however, earn not one cent in royalties.

There have been many, many cover versions, the most popular being Hall and Oates' version in 1983.

The photograph shows Bell Rock near Sedona AZ.
2. 1957. Of course Elvis had to have a Christmas hit. What was it called?

"Blue Christmas," is a 1948 song written by Billy Hayes and Jay W. Johnson. Elvis heard the Ernest Tubb version of the song and wanted to record it himself which he did in 1957 with the help of his backing band the Jordanaires. It was not released as a single but part of his LP "Elvis' Christmas Album".

It was released as a single in 1964 where it reached number eleven on the UK Singles Chart however it took until 2019 for it to chart on the US Billboard Hot 100 for the first time.
3. The original "Rocking Round the Christmas Tree" was recorded in 1958 and periodically re-enters the charts at Christmas time. While there are many cover versions, who sang the original?

This song was written by Johnny Marks ("Rudolph the Red-Nosed Reindeer" and "A Holly Jolly Christmas") and recorded by Brenda Lee when she was only 13. It was not a hit in 1958 or on re-release in 1958-9 but it did enter the Billboard Hot 100 in 1960 when Ms Lee was better known. It also charted in 1961 and 1962. Because of its appeal across a variety of genres, it gets played on many radio stations. In the period between 2014-21, it charted on the Billboard Top 100 in the top ten every year making it all the way to number two in 2019.

The photo shows some rocks around (potential) Christmas trees.
4. The Beach Boys, in 1963, had a Christmas hit with the a song that drew heavily on their previous hit, "Little Deuce Coupe". What was the name of this song?

Producer Phil Spector wanted to release a Beach Boys' Christmas album so Brian Wilson responded and wrote "Little St Nick" in a single night in October 1963 though the music is little more than a rearrangement of "Little Deuce Coupe". The single reached number three on the Billboard special seasonal weekly Christmas Singles chart. It did not appear on a Beach Boys' Christmas album until the following year. True to form with Christmas records, a re-release in 2020 reached number 47 on the US Billboard Hot 100. Also true of Christmas singles it has been covered many times but perhaps one of the more unusual such songs was one sung by John Denver and the Muppets.

The photo shows a little Santa Claus aka St Nicholas.
5. Darlene Love first belted out her signature Christmas hit in 1963 and has sung it virtually every Christmas on TV for the next fifty plus years. What is the name of this hit?

The song was written by Jeff Barry, Ellie Greenwich, and Phil Spector for the 1963 holiday compilation album "A Christmas Gift for You from Phil Spector". It was written for Ronnie Spector of the Ronettes. However, according to Ms Love in a 1968 "Rolling Stone" interview, Ronnie Spector was not able to put as much depth and emotion into the song as needed. Ms Love then recorded the song. It became an enduring success over time and is Ms Love's signature tune. She has sung the song each year (except 2007 - writer's strike) on the last pre-Christmas episode of "Late Night with David Letterman" (1986-92) and the "Late Show with David Letterman" (1993-2014). After the Letterman show was cancelled, Ms Love has performed the song annually on ABC's "The View" 2015-2019 usually as a duet.

"Driving Home for Christmas" was a 1986 modest Christmas hit for Chris Rea. It was literally written in a mini driving home for Christmas. It re-charted in the UK every Christmas 2007-2020.
6. "Merry Christmas, Everybody" was a 'reluctant' number one hit for which Glam Rock act in 1973?

In 1973, Slade were at the peak of their popularity and along with T-Rex were arguably the most popular Glam Rock acts. In that year alone, they had had two number ones ("Cum On Feel The Noize" and "Skweeze Me Pleeze Me"), and they were urged by their manager Chas Chandler to release a Christmas song in December. The group were reluctant to record what they considered a novelty song and the resultant song was certainly a lightweight by their standards. However the song went straight to number one and stayed in the chart until February 1974. Between 2007-2012 it entered the UK Singles Charts every year. It has been covered by many artists and, songwriter and lead singer, Noddy Holder calls the song his pension scheme as 50 years after its initial release it still generated over 500 000 UK pounds annually.

Slade are from Wolverhampton, in the English Midlands.
7. Match one of the biggest musical acts in the world with a Christmas single and this normally would be a recipe for a number one hit. Not this time. Who wrote and recorded "Thank God It's Christmas" in 1984?

Written by drummer Roger Taylor and guitarist Brian May, a Christmas single from Queen should have been almost a guaranteed number one. Despite this, and an inspired vocal treatment by Freddie Mercury, the song peaked at number 21 in the UK singles chart. There could have been several reasons for this: There was no promotional video; it did not appear on a commensurate album (Until the much later released "Greatest Hits III" album; and, it was overshadowed by a monster charity single).
The song had a renaissance in 2019 and re-charted when a promotional animated video was made. The concept promoting the importance of protecting animal welfare came directly from Dr May and Mr Taylor's original intent of the song.

The photo depicts a triumphant queen.
8. Band Aid's charity effort "Do They Know It's Christmas?" was one of the biggest selling singles of all time. In what year was it released?

"Do They Know It's Christmas?" was a song written in 1984 by Bob Geldof and Midge Ure as a response to the Ethiopian Famine of the early 80s. The vocalists included Bono, Phil Collins, Boy George, Sting, George Michael, Status Quo, Tony Hadley of Spandau Ballet & Kool and The Gang. The song was recorded in one 24 hour period in November 1984. Phil Collins appeared with his drum kit despite a drum machine track already recorded.

The song was a massive hit in the UK spending five weeks at number one on the UK Single charts. At the time it sold a million copies in the first week and three million in five weeks making it the fastest selling single in UK history, The song provided the impetus to organise Live Aid the next year.

The photo shows a Barcelona street sign honouring George Orwell who wrote "1984".
9. "All I Want For Christmas Is You" was first released in 1994 and has become a Christmas staple. Which Diva wrote and recorded it?

This song was specifically written to cash in on Mariah Carey's rise and rise as a pop singer and followed the mega-successful "Music Box" album. The song had all the hallmarks of a chart-topper: A love song with bells and Christmas references by a talented artist that knew her market. While it appeared to re-chart every holiday season, it did not hit the Billboard Hot 100 number one position until 2019, making the longest song to reach the coveted hot spot - 25 years.

The photo is a reference to a similarly titled Christmas song "All I Want for Christmas is My Two Front Teeth".
10. The first two decades of the 21st Century were lean years for Christmas rock songs but in 2018, two appeared, both from surprising sources. Who had a hit with a Blues version of "White Christmas"?

Def Leppard, a group best known for their songs in the previous century, released a tender and heartfelt original hit "We all need Christmas" in 2018. It was acoustic, filled with lush strings and full of optimism. A surprise. Indeed.

However, a bigger surprise was a 2018 Eric Clapton Christmas album. "Happy Xmas" was his twenty-first solo studio album which included 13 Christmas covers that had been given the blues treatment. It also included an original, "For Love on Christmas Day" in which Clapton was a co-writer.

The single from the album was "White Christmas", a 1942 Christmas staple written by Irving Berlin. It was made famous by Bing Crosby who sold over 100 million records making it the biggest selling single of the 20th century. Over 500 cover versions are known, none of which was rockier than Mr Clapton's bluesy version which was helped by a cute and heartfelt clay-motion video. The Clapton LP reached the top of Billboard's seasonal Holiday Albums Chart when released in October 2018.

What it meant for this aging rocker was he didn't have to play the Crosby version on a forty year old turntable anymore and the rockier version could take its place on a streaming playlist with all these other rocking Christmas songs.
Source: Author 1nn1