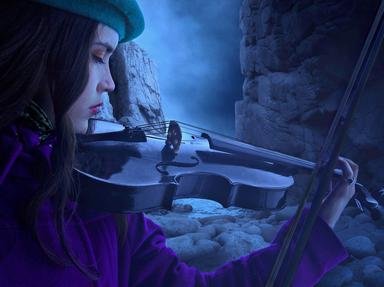 These are all hits Billboard U.S. Hot 100 hits of the 50s and 60s with double word titles; that is the same word repeated twice and no other words in the title. See how many you remember. Have fun!

Quiz Answer Key and Fun Facts
1. Little Richard is the first of our artists to be represented with a song about a girl he once knew. What title could I be thinking of?

"Jenny Jenny" was the title of the song that Little Richard took to the number ten position on the U.S. Billboard charts in June of 1957. The song also reached number two on the R & B charts, and went to number 11 in the U.K. This was his first Top 10 hit on the charts since he hit with "Long Tall Sally" in April of 1956.
2. The next song took The Playmates to new heights on the charts with this speedy tune. Which one?

The Playmates were a late 50s vocal group who surprised the music industry with their hit "Beep Beep" in 1958 which was a novelty song which reached number four on the U.S. Billboard Hot 100 charts. It was the story of a Rambler (a popular U.S. auto of the time built by American Motors) and a Cadillac racing down a back road. The song stayed on the charts for twelve weeks.
3. Possibly the most famous "Garage Rock" song of all time, what was the song performed by The Kingsmen that fits this category?

"Louie Louie" was first recorded in 1955 by Richard Berry. The most popular version was recorded in 1963 by The Kingsmen. It charted in 1963 for the group and peaked at number two on the U.S. Billboard charts, remaining on the charts for three months.

The song was actually investigated by the FBI because of some alleged obscene lyrics in the song, but no charges were ever filed. It is estimated that the song has been covered over 1500 times and most famously featured in the movie National Lampoon's "Animal House" (1978).

It also appears on Rolling Stone Magazine's list of "The 500 Greatest Songs of All Time" at number 55.
4. The Dixie Cups accidentally recorded this double word song which became a hit for them in 1965. Which song was this?

"Iko Iko" was a song written by James Crawford in New Orleans in 1953. The song's original title was ""Jock-A-Mo". The subject of the song is interpreted in some circles to be about a confrontation between two tribes of Mardi Gras Indians. The "accident" occurred in 1965.The Dixie Cups version came about by accident.

They were in a New York City studio for a recording session when they began an impromptu version of "Iko Iko," accompanied only by drumsticks on a coke bottle. The studio tapes were running at the time so the music was recorded, even though it was never intended to happen.

Their producers, the immortal Jerry Leiber and Mike Stoller, heard the recording, added some background music, and had the song released. Pretty good judgment by those guys.

The song hit number 20 on the U.S. Billboard charts.
5. The Castaways had a hit with this mid 60s one hit wonder. Can you name it?

The Castaways came to us from Minneapolis Minnesota and scored with the hit "Liar Liar" in 1965. The song is considered "garage rock". It peaked at number 12 on the U.S. Billboard Hot 100 charts. The group actually performed the song in the 1967 beach movie "It's a Bikini World" and it was also featured in the 1987 movie "Good Morning Vietnam".
6. The Beau Brummels first appeared in the 1960s during The British Invasion. What song brought them into the mainstream?

The Beau Brummels were widely thought to be part of the British Invasion when they burst onto the scene in 1965, but surprisingly, they were from San Francisco, California. They claimed to be influenced by the The Beatles as well as other British groups.

They took their name from a 19th century British fashion plate. They even dressed in the style of the Brits, adding to their British image, but they were American all the way. They first hit with this song "Laugh Laugh" in 1965, reaching number 15 on the U.S. Billboard Hot 100 charts.

They followed with their biggest hit later that year called "Just a Little" which peaked at number eight.
7. A garage band called The Music Machine scored with this 1966 chatty hit. What was the name of the song?

The Ragamuffins formed in Los Angeles in 1965, and after some limited success, changed their name to The Music Machine in 1966. They recorded "Talk Talk' in July that year and it became a Top 20 U.S. Billboard charting hit, but the group never was able to duplicate that success. They had one more charting hit called "The People in Me" which peaked at number 66.
8. This fruity song charted for Neil Diamond in the 1960s. What song was it?

"Cherry Cherry" was written Neil Diamond and produced by Jeff Barry and Ellie Greenwich. He released the song in 1966 and it became his first major hit, peaking at number six on the U.S. Billboard Hot 100 charts in 1966.
9. This song shot into the Top 5 for Cher in 1966. Can you guess which song it was?

"Bang Bang" was Cher's second major solo hit following the successful "All I Really Want to Do" which charted in 1965. "Bang Bang" was later re-labeled as "Bang Bang (My Baby Shot Me Down)" but no matter. It became a number two hit on the U.S. Billboard Hot 100 charts and scored as a Top 20 hit in eleven other countries, selling over 3 million copies in the U.S. alone.

It later was covered by Nancy Sinatra, her father Frank, and Stevie Wonder, among many others.
10. _______ can't trust that day, ______ sometimes it just turns out that way. What fills in the blanks?

"Monday Monday" was a 1966 hit for The Mamas and The Papas written by John Phillips. It was a follow up to their successful debut single called "California Dreamin'" and became their only number one Billboard U.S. Hot 100 charting hit topping the charts for three straight weeks. *It also has been documented as the first recording of a sexually integrated group to reach the top of the Billboard charts.* The song also won a Grammy award in 1967 for the Best Pop Performance by a Duo or Group.

*The Billboard Book of Number One Hits
11. There was a song which fits this category recorded in the 1960s by a group called "Sopwith Camel".

Yes, there actually was a group called Sopwith Camel which was a psychedelic rock band from San Francisco. They emerged in the mid 1960s and scored with the song that fits this category called "Hello Hello". The song sounded somewhat like an old vaudeville tune and peaked on the U.S. Billboard Hot 100 charts at number 26 in 1967.

The group was not able to ever come up with another charting tune and disbanded later that year.
12. What's the name of the song recorded by The Union Gap which fits into this category?

The Union Gap, which featured Gary Puckett, burst onto the music scene in 1967 with their Top 5 hit "Woman Woman". The group formed in San Diego, California and the song peaked at number four on the Billboard Hot 100 charts. It was the first of six consecutive Top 20 hits for the group over an 18 month period during between November 1967 and August 1969.
13. Tommy James and The Shondells took this song to the Top 5 in 1968, and Billy Idol did it again almost twenty years later. What's the song?

"Mony Mony" was the brainchild of Tommy James along with Bo Gentry, Bobby Bloom, and Richie Cordell. The titled was strictly an accident according to James himself.
*True story: I had the track done before I had a title. I wanted something catchy like "Sloopy" or "Bony Maroney," but everything sounded so stupid. So Ritchie Cordell and I were writing it in New York City, and we were about to throw in the towel when I went out onto the terrace, looked up and saw the Mutual of New York building (which has its initials illuminated in red at its top). I said, "That's gotta be it! Ritchie, come here, you've gotta see this!" It's almost as if God Himself had said, "Here's the title." I've always thought that if I had looked the other way, it might have been called "Hotel Taft."* No matter. The song became a number three hit on the U.S. Billboard charts and was James only number one U.K. hit. Billy Idol covered the song in 1981 with minimal success, but did a live version of the song in 1987 which eclipsed James own version and went to number one on the U.S. charts as well as number seven in the U.K.

* Crystal Blue Conversation: Interview, Hitch Magazine 1995.
14. This bubble gum hit shot into the Top 20 for the Ohio Express in 1968. What double worded song was this?

The Ohio Express were one of the major "groups" in the so-called "bubble-gum" sound of the late 1960s. The reason for the quotes is that there were several incarnations using the same name, all being produced by Jerry Kasenetz and Jeffrey Katz and their Super K Productions organization.

They scored with the recording of this song in the fall of 1968, peaking at number 15 on the U.S. Billboard Hot 100 charts. The song did better in Australia where it got as high as number six, and in Canada where it peaked at number two.
15. We'll close with the biggest selling bubblegum hit of all time, and the final double worded title in this quiz. What song was this?

The Archies tune ended up as U.S. Billboard's number one song for the year of 1969. The brainchild of musician Ron Dante, the song spent four weeks at the number one position in the U.S. that year, and has been rated at number 63 on Billboard Magazine's "Greatest Hits Of All Time". Pretty good for a bunch of cartoon characters.
Source: Author fredsixties 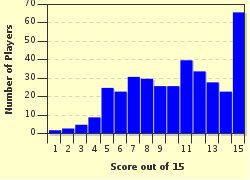 More Title is a Question Quizzes