This quiz is dedicated to Jim Morrison, one of the greatest artists of all time. A singer and songwriter most famous about his work with "The Doors".

Quiz Answer Key and Fun Facts
1. Jim Morrison was not only a singer, but also a poet. Which of the following poetry books was NOT written by Morrison?

"Light my Fire" was written by Ray Manzarek. It is considered the best book written about The Doors. The other three books were authored by Morrison, where he explores the dark sides of the life and catch brilliantly the era of the sixties.
2. Who of the following authors is NOT said to have influenced Morrison?

The influence of Kerouac, Nietzsche and Rimbaud is obvious, since Morrison often incorporated quotes or verses of them into his songs.
3. In "People Are Strange", Jim Morrison says that "Faces came out of the_____" what?

"People Are Strange" was incorporated into the album "Strange Days", the second album recorded by The Doors, in September 1967. It reached number 12 in the U.S. Hot 100 billboard.
4. "I see your hair is burnin' Hills are filled with fire ". From which song, sung by Jim Morrison, is this verse?

The song was released with the album with the same title in January 1971, which was the very last album by The Doors. The song was included in The Doors film "Dance on Fire".
5. In "Riders on the Storm" Jim Morrison sings: "The world on you depends Our life will_______" what?

"Riders on the Storm" was included in The Doors album "L.A. Woman", released in January 1971. It climbed up to number 14 in the U.S. Hot 100 billboard.
6. "Breakfast where the news is read Television children fed" from which song, sung by Jim Morrison, is this verse?

"The Unknown Soldier" was one of the songs contained in The Doors album "Waiting For The Sun". It was released in July 1968. It is clearly an anti-war anthem, written when the Vietnam War was reaching its apex.
7. "Sun is shinin' deep beneath the sea But not enough for you and me and sunshine". Which song, sung by Jim Morrison contains this verse?

"Wishful Sinful" was included in "The Soft Parade" album released by The Doors in 1969. Its popularity in Denmark surpassed its popularity in the US and the UK, since in the former country it reached number number three in the billboard.
8. This song was originally part of the opera "Hauspostille' by Bertolt Brecht. In 1966, Jim Morrison sang it, as part of The Doors album, with the same name. What is the song?

The song was put to music by Kurt Weil. It was first sang by Weil's wife, Lotte Lenya, who later became famous for her role as Rosa Klebb in the James Bond film "From Russia With Love".
9. While Jim Morrison was attending the Florida State University (FSU), he was arrested, but for what reason?


Answer: For a prank at a football game

It was said that, when the incident took place, Morrison was drunk. However, this by no means resulted to expulsion or severe punishment. Also, throughout his studies at the FSU, Morrison appeared in a school recruitment film.
10. Jim Morrison's wisdom was widely reflected in his quotes. For example, "A friend is someone who gives you_________________________" what?


Answer: total freedom to be yourself

As seen from the above quote, Morrison was very interested with philosophical questions dealing with existence, on a degree inspired by exsintentialst philosophers. From a very young age, he was deep interested into reading profanely and exhaustively. On one occasion, an English teacher of Morrison said that "Jim read as much and probably more than any student in class, but everything he read was so offbeat I had another teacher (who was going to the Library of Congress) check to see if the books Jim was reporting on actually existed. I suspected he was making them up, as they were English books on sixteenth- and seventeenth-century demonology. I'd never heard of them, but they existed, and I'm convinced from the paper he wrote that he read them, and the Library of Congress would've been the only source."
Source: Author DeepHistory 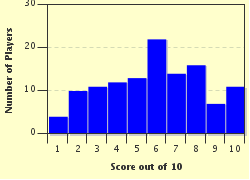 Related Quizzes
This quiz is part of series People are Strange (?):

People, people everywhere and some quizzes to play.