Here's a little Madonna trivia for your hungry heads. If you like, let me know ... I can come with some more challenging stuff about the one and only Miss M.

Quiz Answer Key and Fun Facts
1. What is Madonna's longest running number one hit on the Billboard Hot 100?

And the world thought her career was over!
2. On the set of which video did Madonna meet ex-husband Sean Penn?

3. In which Woody Allen film did Madonna make a cameo appearance?

If you blink you'll miss her.
4. Who photographed Madonna's SEX book?

Surprisingly, there is only ONE correct answer.
6. Which is Madonna's first Grammy winning album?

She did win Grammy for best long form video for Blond Ambition.
7. Who was Madonna's date to the 1991 Academy Awards?

8. What early 80's television show was Madonna turned down for?

What, you say, Madonna turned down for an acting job? Never in a million years! (just joshin' M!)
9. Which mystical tradition does Madonna claim to be a major influence in her life?

10. Who is Madonna's publicist? 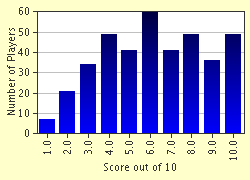 
Other Destinations
Explore Other Quizzes by dkarma