Marina and the Diamonds Trivia Quiz

General questions about Welsh indie/pop artist Marina and the Diamonds.

Share on Facebook
Share on Twitter
Share by E-Mail
Author
hermitthefrog
Time
4 mins
Type
Multiple Choice
Quiz #
354,804
Updated
Dec 03 21
# Qns
10
Difficulty
Average
Avg Score
6 / 10
Plays
113
This quiz has 2 formats: you can play it as a or as shown below.
Scroll down to the bottom for the answer key.

Quiz Answer Key and Fun Facts
1. The official lead single from Marina's sophomore album, "Electra Heart", was released in the UK on 20th March 2012. What was it called?

A nice easy one to start! "Primadonna" debuted and peaked at number 11 on the UK chart, and spent a further four weeks in the Top 20 there, becoming Marina's first single to do so. It also achieved international success, being certified platinum in New Zealand, Australia and Ireland, achieving high peak positions in the charts there.
2. What album track from Marina's debut, "The Family Jewels", opens with the lyric "One track mind like a goldfish / Stuck inside my petri dish / I can't breathe and I can't smile / This better be worth my while"?

Despite not being officially released as a single, "Numb" charted at 135 on the UK singles chart in 2010 due to digital downloads from the album, a higher position than official singles such as "Shampain" and "Power & Control".
3. "The Family Jewels" was released in the UK in early 2010. It debuted and peaked at number five on the UK albums chart, but how many units did it sell in its first week?

By May 2012, "The Family Jewels" had sold 177,268 copies in the UK, earning a Gold certificate. Interestingly, her second album "Electra Heart" only sold 21,358 copies in its first week, but charted at number one, four places higher than "The Family Jewels".
4. Which alternative rock band did Marina perform live with at the NME Shockwaves Awards in 2010?

Together they performed Biffy Clyro's hit single "Many of Horror", which was covered by "X Factor" winner Matt Cardle, who retitled it "When We Collide".
5. Marina's debut single was a double A-side consisting of "Mowgli's Road" and what other track that would go on to appear on her debut album?


Answer: Valley of the Dolls

"Valley of the Dolls" takes its title from the 1967 film of the same name, itself based on a novel by Jacqueline Susann. Another film, "Beyond the Valley of the Dolls", was released in 1970, although it was a parody of the earlier film rather than a sequel, as was originally intended. I don't expect to see a song titled after that movie on album number three!
7. Although Marina isn't overly popular in the United States, what position did "Electra Heart" debut and peak at on the Billboard 200?

Although this may seem a modest peak position, it's a huge improvement when you consider that "The Family Jewels" only managed to reach number 138, largely due to a complete lack of support from the record label.
8. Which American hip hop artist sampled Marina's track "I Am Not A Robot" on his song "You Are Not A Robot"?

"I Am Not A Robot" was released as the third single from "The Family Jewels", peaking at number 26 on the UK Singles Chart in 2010.
9. What award was Marina nominated for, but failed to win, at the 2010 MTV EMAs (European Music Awards)?

Despite losing the award for Best European Act, Marina did take home the award for Best UK and Irish Act that year.
10. The second UK single from "Electra Heart" was "Power & Control". It failed to officially chart due to low airplay and sales, but was nominated for the Popjustice Ł20 Music Prize. It finished in second place, but who won and with what song?

Only songs that make the top 100 singles in the UK officially chart, and "Power & Control" only managed a dire peak position of number 193. Unfortunate, seeing as it's a great track! Marina performed the song at T4 On The Beach 2012, alongside "Primadonna".
Source: Author hermitthefrog

This quiz was reviewed by FunTrivia editor agony before going online.
Any errors found in FunTrivia content are routinely corrected through our feedback system.
Most Recent Scores
Jan 11 2023 : Guest 121: 2/10
Jan 02 2023 : Guest 71: 2/10 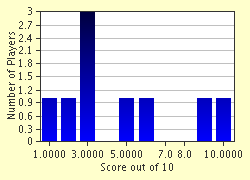 
Other Destinations
Explore Other Quizzes by hermitthefrog

More Marina and the Diamonds Quizzes