This quiz concerns songs from the "Broken" interim. All questions are song lyrics.

Share on Facebook
Share on Twitter
Share by E-Mail
Author
Dejera/Squall
Time
4 mins
Type
Multiple Choice
Quiz #
117,404
Updated
Dec 03 21
# Qns
10
Difficulty
Average
Avg Score
7 / 10
Plays
557
This quiz has 2 formats: you can play it as a or as shown below.
Scroll down to the bottom for the answer key.

Quiz Answer Key and Fun Facts
1. "After everything I've done, I hate myself for what I've become."

There is a video for "Gave Up" which features Marilyn Manson playing a guitar.
2. "Dress up this rotten carcass just to make it look alive."

"Last" was remixed into the very interesting "Throw This Away" on the "Fixed" Single.
3. "I wanna say all those things that would be better unsaid."

Trent originally helped Pigface write and sing this song for their album, "Gub".
5. "I don't know what I am, I don't know where I've been. Human junk: just words and so much skin. Stick my hands through the cage of this endless routine. Just some flesh caught in this big broken machine."

"Happiness in Slavery" seems to be Trent's view on the United States of America; the "machine," as he calls it, is very likely representative of "America."
6. "I am so dirty on the inside."


Answer: "Throw This Away"

This soundbite from "Throw This Away" is oftentimes used by Trent in his live performances when he sings the original, "Last".
7. "Don't think you're having all the fun. You know me; I hate everyone."

"Wish" spurned at least two different music videos.
8. "I know what's coming to me is never going to arrive."

"Last" seems to be Trent's intrepretation of a one-way relationship in which he is still waiting for his love to be returned to him.
9. "This is the first day of my last days."

"Wish" was originally released -- cleaned up a little bit -- on an old release titled "Purest Feeling II".
10. Finally, which of these is an instrumental?

"Pinion" and "Help Me I Am In Hell", both found on "Broken", were the first two instrumental tracks released by Trent. On "Fixed", you could find the instrumental "Screaming Slave".
Source: Author Dejera/Squall

This quiz was reviewed by FunTrivia editor bullymom before going online.
Any errors found in FunTrivia content are routinely corrected through our feedback system.
Most Recent Scores
Jan 19 2023 : Guest 174: 8/10
Jan 05 2023 : Guest 98: 10/10 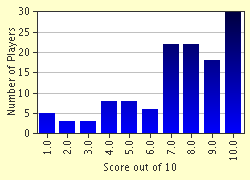 
Other Destinations
Explore Other Quizzes by Dejera/Squall