Quiz Answer Key and Fun Facts
1. What is the next lyric? "She's the kind of love drives a man insane..."


Answer: She sticks her poison right in my vein

"Bitter Pill", from the "Greatest Hits" album.
2. What is the next lyric? "You know he's gotta get away/ To the merry-go-round and round..."


Answer: Count the times that he laid awake at night thinkin'

"Afraid" is off of "Generation Swine"-1997. He wrote the song after their first night together. Donna left the first thing next morning, claiming that she couldn't get herself into a relationship. After she left, Nikki wrote the song. This information comes from "The Dirt", Motley Crue's autobiography.
4. Which one of the following songs do three memebers all sing in?

You can clearly hear Nikki and Vince. Tommy sings the background vocals. Listen closely!
5. What remastered album does "I Will Survive" appear on?


Answer: Shout At The Devil

"Shout at the Devil" was released in 1983. The song was only just recently released on the "Remastered" CDs.
6. What is the next lyric? "There's a problem with the girls here on earth..."


Answer: I'm outta my head without you

"Nona" was writtent for Nikki's grandmother. He never made it to her funeral becuase he was on drugs.
8. What the next lyric? "You click your heels three times imagination runs wild..." 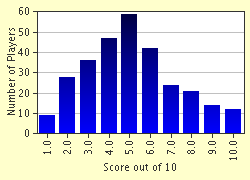 
Other Destinations
Explore Other Quizzes by ComeOnAndDance