Guess what? I created this quiz on Weird Al's Birthday, 15 minutes after. Hope you know his birthday for question 1.

His full name is Alfred Matthew Yankovic.
3. Which of the following songs were NOT on "Weird Al"s first album titled "'Weird Al' Yankovic"

"The Saga Begins", a parody of Don McLean's "American Pie", was not introduced until June 1999 on his 10th album, "Running with Scissors".
4. "Weird Al" is related to The Polka King, Frankie Yankovic.

Yankovic is not a common last name, but they were not related, although they were friends for many years.
5. What album did "Weird Al" release in 2003?

His latest album, "Poodle Hat", came 4 years after the previous one. Hopefully, big fans like me and you (or at least you should be) won't have to wait four years for every new year.
6. How old was "Weird Al" when he started taking accordion lessons?

It was the day before his seventh birthday. A salesman came to the Yankovic's door offering cheap guitar or accordion lessons and his parents choose the accordion. He quit taking lesson a few years later and began to teach himself.
7. "Weird Al"'s parents are divorced.

"Weird Al"'s parents were together from before he was born, until their tragic deaths in 2004 from carbon monoxide poisoning.
8. What is "Weird Al"'s daughter's name

Suzanne is his wife's name. I used Stephanie randomly.
9. "Poodle Hat" has which of the following on it?

These can be viewed on your computer. It also has lyrics, a photo gallery, and the versions of some of the songs on it with only music.
10. What is "Weird Al"'s poodle's name?

Bela is on his head on the cover of "Poodle Hat". They also have a cockatiel.
Source: Author Devro 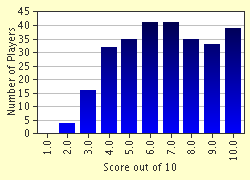 
Other Destinations
Explore Other Quizzes by Devro