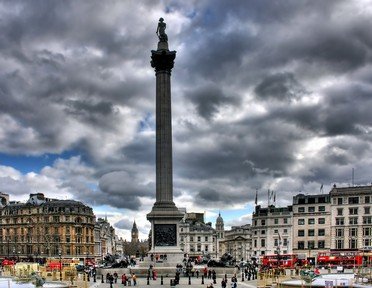 A circular blue plaque on a building, marking the place of birth or residence of a distinguished resident or visitor, is a familiar sight around London. How many of them can you identify?

Quiz Answer Key and Fun Facts
1. A blue plaque at 31 King Street, Covent Garden, marks the house where this English composer lived from 1760 to 1775. He is best known as the composer of "Rule Britannia", written for the patriotic masque "King Alfred". What is his name?

Arne was born in London in 1710 and died in 1778. More recently, this address was the home for many years of the British Communist Party: not an organisation who would have agreed with many of the sentiments of Arne's most famous work!
2. The subject of this plaque lived at 6 Grenville Place, South Kensington, from 1875-1890. The plaque describes him as a "pioneer in social research", and his greatest work is his 17-volume study of poverty in London, entitled "Life and Labour of the People of London". Who is he?

Booth was a successful businessman, but this did not prevent him from being profoundly concerned by contemporary social problems. Incidentally, I felt obliged to include Booth in this quiz, since I myself lived at 6 Grenville Place for a while, and his blue plaque was on the wall just outside my bedroom window!
3. A plaque at 17 St Anne's Villas, Kensington, W11, marks the birthplace of this performer in 1861. He went on to become one of England's most popular music-hall artists, and is best known for his songs "My Old Dutch" and "Knocked Them in the Old Kent Road". What is his name?

Chevalier's father was French, hence his Gallic surname. He started as a straight actor in 1877, but started working in music hall during a period when "legitimate" work was hard to come by. He died in 1923.
4. This famous novelist lived at several addresses in London, many of which are marked by blue plaques. One of these is 48 Doughty Street, Holborn, where he lived from 1837-1841, and where he wrote two of his most famous works, "Oliver Twist" and "Nicholas Nickleby". What is his name?

Dickens was able to afford to move to this house following the success of "The Pickwick Papers". His marriage to Catherine Hogarth also took place at this time.
5. The blue plaque at 121 Regent's Park Road, NW1, describes this individual as a "political philosopher". He was born in Germany, but moved in England in 1842, when he was in his early 20s. He was a friend and associate of Karl Marx, and together they wrote the "Communist Manifesto". Can you name him?

Engels lived here during the latter part of his life, from 1870-1895.
6. A blue plaque at 20a, Danvers Street, Chelsea, commemorates the fact that it was the residence of a particular Scottish doctor from 1929 until his death in 1955. In fact, the discovery for which he is most famous - the effect of penicillin on bacteria - took place in 1928, the year before he moved here. What is his name?

Fleming, along with Dr Ernst Chain and Dr Howard Florey, received the Nobel Prize for Physiology and Medicine in 1945 for their work on the medical use of penicillin.
7. This man, born in 1856, lived in London for only a short while, from 1938 until his death in 1939. What is the name of this distinguished professor, who is described by the blue plaque on his house at 20 Maresfield Gardens, Hampstead, NW3 as the "founder of psychoanalysis"?

Freud, as a Jew, was forced by the Nazis to abandon his medical practice in Vienna in 1938, whence he fled to England. He continued to practice at this London address until shortly before this death. It is now the Freud Museum, and includes his famous couch, which he managed to bring with him from Vienna.
8. The blue plaque at 11 Carlton House Terrace, SW1, marks the one-time residence of one of Victorian England's greatest statesmen. He was Prime Minister on four separate occasions: 1868-1874, 1880-1885, 1886 and 1892-1894. What was his name?

There is a well-known story about Gibbon, which tells how he presented the Duke of Gloucester (brother of King George III) with a copy of Volume 1 of "The Decline and Fall of the Roman Empire". When the second volume appeared, Gibbon presented him with a copy of that also.

The Duke's response was "Another damned, thick, square book! Always scribble, scribble, scribble! Eh, Mr Gibbon?" Gibbon's reply to this is not recorded.
10. This artist, born in 1827, was a founder-member of the Pre-Raphaelite movement. He lived at 18, Melbury Road, Fulham, for 30 years until his death in 1910. His best-known works include "The Light of the World" and "The Lady of Shalott". Can you name him?

Holman Hunt's co-founders of the Pre-Raphaelites were Dante Gabriel Rossetti and John Everett Millais. During his lifetime, it was his religious works that bought him the greatest fame, not wholly to his satisfaction. Some of the details for this quiz came from the book "Behind the Blue Plaques of London" by Alan Symons. All the "incorrect" answers are also featured on plaques throughout London.
Source: Author stedman 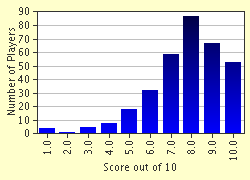