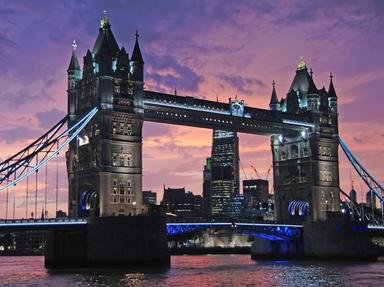 There are lots of ways to get around London for both tourists and those who live there. This Photo Quiz introduces you to some well-known and less obvious examples.

Quiz Answer Key and Fun Facts
1. The Underground or Tube is one of the quickest ways to travel longer distances across London, although for obvious reasons you don't actually see much of the city while using it. Which of the following is NOT one of the different lines on the network?

The majority of Tube lines are named with reference to the areas of London that they serve. Others include the District Line (which links the eastern and western suburbs) and the Victoria Line (which has a major intersection at Victoria rail station). The Jubilee Line was named in honour of Queen Elizabeth II's Silver Jubilee in 1977, and opened two years later, in 1979.
2. This picture shows a row of bicycles for hire in central London, available through a scheme introduced in 2010. By what nickname are these known to Londoners, inspired by the name of the Mayor of London at the time of their introduction?

Boris Johnson, a keen cyclist himself, was the mayor in question. The hire scheme was sponsored by Barclays Bank, who had presumably been lured into stumping up the cash in the expectation that the scheme would quickly become known as "Barclays bikes".
3. If you needed to catch a licensed taxi in London, you would look out for a yellow vehicle a bit like this one.

No, the picture shows a New York cab. Most licensed London taxis are black. In order to obtain a license to drive a London taxi, drivers have to pass a test known as "The Knowledge", which requires them to memorise the road network in Central London within six miles of Charing Cross, and the main routes in the suburbs.
4. What is distinctive about the Docklands Light Railway, seen here passing through the Canary Wharf area of London's docklands?


Answer: The trains have no drivers

The Docklands Light Railway (DLR) was designed to serve the new business and residential developments on the Isle of Dogs in the late 1980s. The first section opened in 1987, but as the docklands development expanded so did the DLR, adding extensions to Lewisham, Beckton and Woolwich, as well as to Bank in the City of London itself.

The trains are controlled by a central computer, although they do carry a staff member on board in case of emergencies.
5. Which notorious YBA (Young British Artist), also known for his pickled sharks and dissected sheep, designed the spotty colour scheme for this Thames Clipper boat, which provides a passenger service on the River Thames?

The Hirst boat is named the Hurricane, and was given the special livery to advertise the special riverboat service between the Tate Britain Art Gallery in Pimlico, and its companion, Tate Modern, on the South Bank.

Various companies have tried in recent years to run commuter services on the River Thames, as a viable alternative to trains and tubes. Thames Clipper, which has been doing so since 1999, is the first company to really make a success of it.
6. One of the best ways to get around London is using shanks' pony - or walking! This photograph shows the pedestrian Millennium Bridge over the River Thames, looking towards the Tate Modern art gallery on the South Bank. What even more famous London landmark would you see directly in front of you if you were walking in the other direction?

The Millennium footbridge was originally opened in 2000, to mark the start of the new Millennium. It was very quickly found to sway uncomfortably, and was closed after less than a week while the architects sought to eliminate the excessive movement. It reopened in 2002, and has since become a popular means of crossing the Thames.
7. There are more horses in Central London than you might think, although it isn't really a practical means of getting around London for most people. What is the name of the sand-covered track in Hyde Park which is designed for recreational equestrian use, as shown in this picture?

The Household Cavalry, based at Hyde Park Barracks, uses Rotten Row to exercise its mounts, and there is a commercial stable nearby where the public can hire horses or arrange riding lessons. The Metropolitan Police also has a Mounted Branch, which is employed on a range of duties from routine patrols to crowd control at demonstrations and sporting events.
8. Tourists who don't get further than Trafalgar Square and St Paul's Cathedral won't have the pleasure of travelling on this form of transport, which can be seen in South London, taking passengers between Beckenham or New Addington and Wimbledon. It's not a train, it's not a bus - so what is it?

Electric trams used to be common in London during the first half of the 20th Century, before being phased out and replaced by buses. The new South London Tramlink was opened in 2000, providing a useful east/west transport link.

For any real anoraks out there, the train in the picture is sporting what is known as the "second livery" paint scheme. By 2009, all the trams had been re-liveried in green.
9. What's so special about this vehicle, seen here travelling past some traditional London roadworks in Whitehall?


Answer: It is amphibious

The vehicle shown is operated by London Duck Tours, which uses refurbished World War II amphibious landing vehicles to provide a tour round London, culminating in a short ducking in the River Thames.

The vehicles are named after female characters from Shakespeare's plays. Allegedly, one of them was originally christened Ophelia, until just in time someone remembered what fate was suffered by that unfortunate lady.
10. This picture shows perhaps the most famous form of London transport - the red double-decker bus. What is the generic name for the version shown here, famous for its open platform at the rear, allowing passengers to leap off in the middle of traffic, straight under the wheels of one of the two buses coming along just behind?

Visitors to London are often disappointed to discover that the majority of Routemaster buses have been withdrawn from service, on the grounds that they were inaccessible to wheelchairs. Many of them were replaced by so-called "bendy buses", which were twice as long, meaning that they had problems navigating many of London's winding streets, and had a tendency to catch fire for no apparent reason.

During the 2007 election campaign for London's Mayor, candidate Boris Johnson promised to scrap the "bendy buses" and introduce a new version of the Routemaster. The first of these new buses were due to enter service in 2012, just in time for the London Olympics.
Source: Author stedman 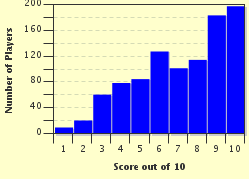