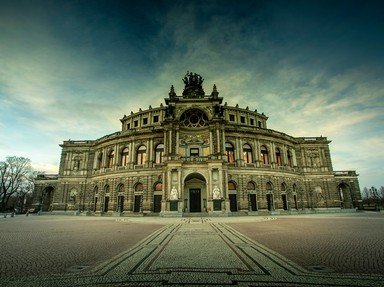 Curtain Up on 10 London Theatres Quiz

Few would argue that London is the theatre capital of the world. What do you know about just a few of the famous theatres to be found there?

Share on Facebook
Share on Twitter
Share by E-Mail
Author
stedman
Time
4 mins
Type
Multiple Choice
Quiz #
316,596
Updated
Dec 03 21
# Qns
10
Difficulty
Average
Avg Score
7 / 10
Plays
694
Awards
Top 35% Quiz
This quiz has 2 formats: you can play it as a or as shown below.
Scroll down to the bottom for the answer key.

Sam Wanamaker founded the Shakespeare Globe Trust in 1970, dedicating the rest of his life to obtaining permission, and then raising money, for the construction of an approximate representation of the original 1599 theatre, as close as possible to its original site. Sadly, he died in 1993 while the building was still incomplete. It officially opened for business in 1997.
2. A popular UK TV show between 1955 and 1967 was broadcast from a famous London theatre situated just to the south of Oxford Street. Its name was "Sunday Night at the ..." where?

"Sunday Night at the London Palladium" was a weekly variety show, featuring singers, comedians and other entertainers. It was enormously popular, and at the peak of its popularity nearly half of the population of the UK would watch (and this at a time when not everyone even had a TV set).
3. When it opened in 1977, which of the following was NOT one of the three stages that comprised London's National Theatre complex?

The three auditoriums were originally named after individuals who played crucial roles in establishing the National Theatre on London's South Bank: Laurence Olivier (its first Artistic Director); Oliver Lyttelton (its first Chairman); and Lord Cottesloe (first chairman of the South Bank Board).

In 2014, the Cottesloe was renamed the Dorfman, after Lloyd Dorfman, a philanthropist who had made a generously large donation to the theatre.
4. The New London Theatre, built in 1973, was the home of which long-running musical between 1981 and 2002?

"Cats" was written by Tim Rice and Andrew Lloyd Webber, and at the time of its closure was the longest-running musical in the world.
5. The Savoy Theatre in the Strand got its name because it was built next to the Savoy Hotel. True or False?

The Savoy Hotel in fact took its name from the theatre. Both were built by Richard D'Oyly Carte, but the theatre opened in 1881, with the hotel following in 1889. The Savoy Theatre was the world's first public building to be entirely lit by electricity, and was constructed to be a home for D'Oyly Carte's productions of the Gilbert and Sullivan operas.
6. The Unicorn Theatre in Tooley Street, near London Bridge Railway Station, is dedicated to producing plays aimed at which particular audiences?

The Unicorn began life as the English Children's Theatre, and between 1961 and 2005 had its headquarters at the Arts Theatre near Leicester Square. In 2005, it moved into a brand-new purpose-built theatre near London Bridge Station. It produces a range of plays for all ages of young people, from pre-school to teenagers.
7. The Novello Theatre in the Aldwych is named after which individual, who lived in a flat in the same building for many years?

Until 2005, the Novello was known as the Strand Theatre, but was renamed in tribute to Ivor Novello, whose London home was a flat above the theatre from 1913 until his death in 1951. Novello's exotic surname belied his origins; he was born David Ivor Davies in South Wales, in 1893.
8. Between 1953-1979, who was the founder and artistic director of the Theatre Workshop, based at the Theatre Royal Stratford East?

The Theatre Workshop's best known and most influential production was the musical show "Oh, What a Lovely War!", which was devised by Joan Littlewood and the cast, and given its premiere at the Theatre Royal Stratford East in 1963. Other alumni of the Theatre Workshop included Barbara Windsor, who appeared in productions of Lionel Bart's musical "Fings Ain't Wot They Used to Be" and the play "Sparrers Can't Sing" (which was also filmed).
9. Which theatre became famous between 1871 and 1902 for the performances there by Sir Henry Irving, especially in such Shakespearean roles as Hamlet, Macbeth and Shylock?

The business manager of the Lyceum Theatre between 1878 and 1898 was Bram Stoker, author of "Dracula". Irving was the first actor to be honoured with a knighthood, the stage until his time being regarded as hardly an occupation for a gentleman. His female co-star in many of these was Dame Ellen Terry (herself great-aunt of the actor Sir John Gielgud). Between 1939 and 1996, the Lyceum was used as a ballroom and pop concert venue, before reopening following a major refurbishment.
10. What is the main distinguishing feature of the theatre in Regent's Park?


Answer: It is open-air

The Regent's Park Open-Air Theatre stages productions during the summer months only - which in the UK is no guarantee whatsoever of a rain-free performance.
Source: Author stedman

This quiz was reviewed by FunTrivia editor trident before going online.
Any errors found in FunTrivia content are routinely corrected through our feedback system.
Most Recent Scores
Jan 18 2023 : Guest 83: 0/10
Jan 05 2023 : Guest 146: 8/10 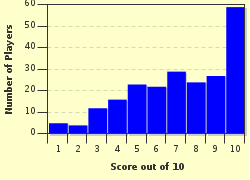