How much do you know about the famous Native American Chief?

Quiz Answer Key and Fun Facts
1. What battle is Crazy Horse most remembered for?

Also known as Custer's Last Stand, it was a clear victory for the Indians.
2. What year was Crazy Horse born?

This is an approximate date, near Rapid Creek, SD. His Sioux name was Tasunka Witco, which roughly tranlates as Crazy Horse.
3. What people did he come from?

He was a member of the Oglala Sioux.
4. What quality made his people choose him as chief?

These are only some of the qualities the Sioux people loved about him. He was modest, and generous. He would give up his food to help people who were hungry. He was also a brilliant tactition. Basically, he was everything the Plains tribes desired in a cheif, and was appointed around 1858.
5. Something was discovered in the Black Hills, the sacred grounds of Crazy Horse's people. The government offered to buy it, but the tribal leaders refused. What was discovered?

In 1875. In response to the refusal, the government threatened to shoot any Indian not on a reservation.
6. In the Battle of the Rosebud, who did Crazy Horse square off with?

A strategic victory for the tribesmen, it took place on June 17, 1876. The white men sustained heavy losses.
7. After Little Bighorn, Crazy Horse and his followers fled. The following spring, under a promise of his own reservation he and 800 followers surrendered. What fort did he surrender at?

On May 5, 1877.
8. After Crazy Horse was constrained to the Red Cloud Agency, the other chiefs resented Crazy Horse's fame.

Because of this, they urged General Crook to confine him.
9. Why did Crook order Crazy Horse's arrest?

Crook was taken in by the false rumors and ordered his arrest on May 5, 1877.
10. Crazy Horse was bayonetted in a struggle during his arrest and died a short time later. What date did he die?

Crazy Horse is commemorated by Korczak Ziolkowski's gigantic sculpture in the same Black Hills he gave his life protecting. A beautiful site, worth a trip in itself.
Source: Author blondangel 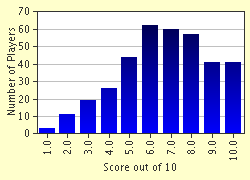 
Other Destinations
Explore Other Quizzes by blondangel