This is a quiz about the amazing Native American woman, Sacagawea. If you enjoyed this quiz, look for my other ones (they all say 'Peeks' at the beginning). Thanks--and have fun!

Quiz Answer Key and Fun Facts
1. What is named after Sacagawea?

Sacagawea is one of the most well-known, and unknown, figures in United States history. No one is certain how to pronounce or spell her name.
2. In what year was Sacagawea introduced to the Lewis and Clark expedition?

Around the age of 15, this young woman of the Shoshone tribe, along with her two-month-old infant, joined a group of mostly white men whom she had never met before. What little is known of Sacagawea's life before and during that time is found in the journals of Lewis and Clark.
4. What does 'Sacagawea' mean?

In Hidatsa, Sacaga means 'bird', and wea means 'woman'. Some North Dakota Hidatsa believe that the name should be spelled 'Sakakawea'.
5. In what year did the U.S. Mint introduce the Sacagawea dollar?

On one side of the dollar, it has an image of Sacagawea and her son, Pomp. People across the nation nominated 17 American women for the honor of appearing on the coin, including Betsy Ross, Eleanor Roosevelt, and Rosa Parks. The young woman who posed for the image is of partial Shoshone heritage. The coin is the first circulating U.S. coin to show the image of a child.
6. What are Lewis and Clark's full names?

Sacagawea is mentioned some three dozen times in Meriwether Lewis and William Clark's journals. Few of the entries refer to her appearance, her actual words, her temperament, or her feelings. She herself did not keep a journal of her experiences.
7. In what modern-day state was Sacagawea born?

Sacagawea's date of birth is unknown but it is believed that she was born around 1789 in Lemhi County, in the eastern part of what is now the state of Idaho. Her people, the Lemhi Shoshone, or Snake People, spent much of the year traveling in small groups. From about 1700, the Shoshone had horses, probably pintos and Apaloosas acquired from the Nez Perce.
8. In the fall of what year was Sacagawea captured?

In the fall of 1800, when Sacagawea was around 10 years old, her group was camped near the three forks of the Missouri River. Suddenly, a band of Hidatsa (also called Minataree) attacked. The Shoshone bows and arrows were useless against the Hidatsa's rifles. Sacagawea and others were captured and taken back to the Hidatsa villages near present-day Stanton, North Dakota.
9. Who was Sacagawea 'sold' to?

Within a few years of arriving at the Hidatsa village, Sacagawea was sold or lost in a gambling wager to Toussaint Charbonneau, a French-Canadian trader. The marriage was not a love match. Charbonneau had the typical trader's attitude toward Indian women--they were very good workers.
10. When Sacagawea was born, who was President of the U.S.?

Sacagawea's date of birth is unknown but it is believed that she was born around 1789 in Lemhi County, in the eastern part of what is now the state of Idaho. George Washington was president whenshe was born, and the country consisted of 13 states huddled along the Atlantic Coast.

But all that would change very quickly. Thomas Jefferson, who became President in 1801, envisioned a nation that stretched from the Atlantic to the Pacific.
11. What does 'Pomp' mean in Shoshone (Sacagawea's son)?

On February 11th, 1805, Sacagawea went into a long, difficult labor. She gave birth to a boy, whom Charbonneau nomed Jean Baptiste. She called him Pomp, meaning 'first born' in Shoshone (even though he was her second child).
12. When did Sacagawea see her people during their journey?

On August 15th, 1805, Sacagawea, Charbonneau, and Clark were walking through high dew-covered grass when suddenly Sacagawea began jumping up and down, dancing with joy. She pointed to approaching Indians and sucked her fingers, as this was a sign that these were her people.
13. Who was the chief of the Shoshone?

From Cameahwait, Sacagawea learned that most of her family were dead. Only two brothers and her oldest sister's child remained. Sacagawea immediately adopted the little boy.
14. When did the expedition reach the Pacific Ocean?

When they reached the Pacific Ocean, they began scouting for a place to locate their winter quarters. Should they stay near the coast? Should they move back up the Columbia River? Which side of the river should they camp on? The captians took a vote. Sacagawea participated in the vote, and so did York, Clark's slave.

It was the first time in American history that a black slave and a woman had voted. Eventually, the Corps built Fort Clatsop on a small tributary of the Columbia River. There the group would stay until March 23rd, 1806.
15. What two dates do people think are the dates she died?

There are two vastly different accounts of Sacagawea's death. The one most widely accepted by historians was recorded by John Luttig, clerk at Fort Manuel, in what is now South Dakota. On December 20th, 1812, Luttig wrote in his journal: 'This evening the wife of Charbonneau, a Snake squaw, died of a putrid fever. She was a good and the best woman in the fort, aged about 25 years. She left a fine infant girl.' Luttig later took the girl, named Lisette, to St. Louis. There, in Orphan's Court, Lisette and Jean Baptiste (Pomp) Charbonneau were adopted by William Clark on August 11th, 1813. If this account is correct, Sacagawea is buried somewhere on the Standing Rock Indian Reservation, site of the old Fort Manuel.

Alternatively, the oral tradition of the Shoshone says that a woman called Porivo, who spoke both English and French, told stories of traveling with Lewis and Clark, and of possessing a treasured Jefferson Medal. This woman, who some suggest was Sacagawea, died on April 9th, 1884.
Source: Author Peeks 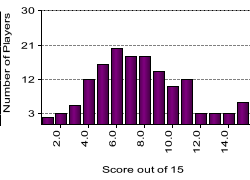 
Other Destinations
Explore Other Quizzes by Peeks