Dead Before You Know It Trivia Quiz

Quiz Answer Key and Fun Facts
1. Early in the seventies, a magazine called "Melody Maker" printed a send-up obituary of a recent performance by a well-known rock artist of the time, whose name is associated with barrels. Who was he?

Cooper's heavy rock music has spanned over forty years. He's known for his bizarre concerts designed to shock and alarm people. Don't be deceived by the externals however. Cooper, who's a born again Christian, has been happily married since 1976 and he and his wife have three children. Perhaps the death notice scared him more than he realised. On reading of his demise, many music fans took it for fact, and great consternation was the result. So much so, that Cooper had to laughingly issue a denial which read in part, "I'm alive - and drunk as usual."
2. Black Nationalist Marcus Garvey had a stroke in 1940. To add insult to injury, he then read in the "Chicago Defender" that he had died. How did this paper sum up his life?

Garvey was considered a Jamaican national hero. Born in that country, he would grow up to be not only a Black Nationalist, but also a publisher, journalist, entrepreneur, Pan-Africanist and speaker. He was the force behind the Pan-African philosophy, whose intention was for the world to redeem Africa and for all colonial powers to be evicted from that continent.

His policies were controversial and designed to cause havoc. Fellow African American activist, William Du Bois, described him as "the most dangerous enemy of the Negro race in America and in the world.

He is either a lunatic or a traitor." Garvey survived the shock of reading his pre-emptive obituary, but did indeed die that same year. Some of his followers would go on to insist that he was poisoned. Who knows? Stranger things have happened.
3. In 1571, on the way to his own funeral, how was one Matthew Wall brought back to life?

The poor man was a deep sleeper - very deep. The impact of the coffin hitting the ground woke him up with a considerable start. People exclaimed in religious fervour, crying out that he had been resurrected from the dead - and this miracle is still celebrated every year in the village of Braughing in the county of Hertfordshire, England.
4. In 2009 in Canada, it was heard that former UK Prime Minister Margaret Thatcher had died. Canadian Prime Minister Stephen Harper's staff prepared a suitable condolence notice to be issued, only for what truth to be revealed?


Answer: Thatcher was the name of a cat

The cat belonged to John Baird, Canadian Minister for Transport, and he'd named his moggy after the former British Prime Minister. When it passed away in November 2009, he'd sent a brief text message, which had somehow gone to the wrong section, saying, "Thatcher has died."
5. Which British author, on reading in a magazine of his death, wrote to the magazine, saying "I've just read that I am dead. Don't forget to delete me from your list of subscribers"?

British writer and poet Kipling lived from 1865 to 1936. He is noted for works such as "The Jungle Book", "Kim" and "The Man Who Would Be King" to name just a few. He received the Nobel Prize in Literature in 1907, the youngest writer to be awarded this honour in the 20th century. The other three writers mentioned above are all American.
6. In 2003, the CNN website's pre-written obituaries, which had Pope John Paul II mixed up with England's Queen Mother, described the Pope as having what?


Answer: A great love of racing

In what became known as the CNN.com incident, it was revealed that multiple pre-written memorials of world famous figures were in place in case of sudden death of these international figures. The one template was used and simply altered to suit the occasion.

However, several pieces of information had been mistakenly carried over to the wrong obituaries. Neither of these world figures in fact died in 2003. Pope John Paul died in 2005, and the Queen Mother was already deceased, having passed away in 2002.
7. In yet another CNN obituary mix-up in 2003, the description of President Ronald Reagan's early life as "life-guard, athlete and movie star" was mistakenly applied to which notorious world leader?

Both men were still alive at the time of the report. Mr Reagan did not die until the following year. Castro was still Prime Minister of Cuba, a post he resigned in 2008, after nearly 50 years in the role.
8. In 1936, Swedish big game hunter and writer Baron Blixen's second wife was mistakenly reported in the media as having died, when it was his third wife who'd actually passed away. What did his second wife do as a result of this?


Answer: Sent her bills back, marked as "Deceased"

Cockie Hoogterp was quite an interesting woman, and certainly unflappable. During the period she was married to the Baron, he was so poverty stricken that they lived in a tent for months, before building a very simple hut. When Edward, Prince of Wales, visited Africa during this time for the purpose of going on a lion hunt, the Baron arranged for him to visit, but without informing his wife that the prince was coming. With nothing suitable in the house to serve royalty, she quite calmly served the Prince up a plate of scrambled eggs - which he quite happily helped her cook.

The Baron and his first wife were made famous in the oscar winning movie, "Out of Africa".
9. In 1993, when South African Sipho William Mdletshe was found to be alive after two days in the morgue, why did his fiancee refuse to see him?


Answer: She believed he had turned into a zombie

Sipho William Mdletshe had been involved in a car accident and was thought to be deceased, so his body was shipped to the morgue and placed in a metal box. There that hapless man stayed for two ghastly days until his cries eventually alerted morgue workers.

Then to add insult to injury, his fiancee turned out to be the overly superstitious kind. Personally, I would have gone insane if stuck in a metal box in a morgue for two days, and could care less about romance after being rescued. I would have been far more interested in my straitjacket.
10. In 1997, Serbian Vuk Perik's funeral was very well attended. What happened during the ceremony?


Answer: He turned up and thanked everyone for coming

This peculiar man had placed his own death notice and funeral arrangements in the paper because he wanted to see how many people would bother turning up to mourn his loss. He hid outside the venue for a while to observe the proceedings and then walked in to show his appreciation. Well, I'm not sure about you, but I may have been a tad annoyed about that and most definitely would have refused to attend his next passing over function.
Source: Author Creedy 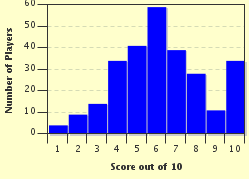 Related Quizzes
This quiz is part of series Just for Laughs:

Laughter releases all kinds of happy chemicals in the brain. These ten quizzes and their additional information, I hope, will do just that for you. Have fun.


1. What Happens After - Gulp - Death? Average
2. De-Myth-tifying Australian Myths Very Easy
3. We Are Very Much Amused Tough
4. Comical Facts No 1 Average
5. The Last Few Moments Average
6. Amusing or Interesting Food Facts Average
7. Bit of This and That No 7 Average
8. Comical Facts From Around The Globe Average
9. Kissing Kidding Average
10. Dead Before You Know It Average