Ever meet your double? Rumor has it that everyone has a doppelganger somewhere in the world. Here we'll explore some famous cases of body doubles, impersonators and lookalikes, some confirmed and some perhaps the stuff of legends.

Quiz Answer Key and Fun Facts
1. Several stories involving political decoys have surrounded this leader, but one of the more interesting tales involved the death of actor Leslie Howard. Which man's alleged body double died in a plane crash with Howard?

In 1943, a civilian KLM airliner was shot down by the Luftwaffe over the Bay of Biscay. Among the casualties were Howard and his business partner, Alfred Tregear Chenhalls, who bore a resemblance to Churchill. Even Churchill had briefly accepted the theory that a spy had noticed Chenhalls boarding the plane and had called in the Luftwaffe, but the fact that the passenger list had been forwarded to Berlin before the strike led to another theory that Howard may have been the true target.

His anti-Nazi propaganda campaign had drawn the ire of Joseph Goebbels, and he was rumored to be involved with British Intelligence operations.
2. Sometimes a person can't even pretend to be his own double. Which actor failed to make it to the final round in a lookalike contest dedicated to him?

The usual version of the story holds that it was a contest in Switzerland and that Chaplin placed second or third, but according to Snopes.com, the contest actually took place in San Francisco, and he didn't make the final round. Although Chaplin might not have looked like himself, Bob Hope managed it - he won first place in another Charlie Chaplin lookalike contest.
3. Latif Yahia, the body double for this dictator's son, was forced to undergo plastic surgery to complete the illusion. Which leader was it?

Latif Yahia was a childhood classmate of Uday Hussein, and his strong resemblance to Hussein earned him teasing from his friends and the "honor" of being involuntarily chosen as body double. He was groomed for the job during the Iran-Iraq War and remained Uday's body double until the 1990 Gulf War, surviving numerous assassination attempts intended for the younger Hussein. Saddam Hussein was also alleged to use body doubles; a forensic study of photographs and T.V. footage of Hussein showed that he had used at least three different body doubles over the last fifteen years of his life.
4. One of the most famous alleged body doubles was William Campbell. He was rumored to have taken the place of which musician in the 1960s?

The "Paul is dead" rumors were first started by college students who uncovered clues in the Beatles' music and on their album covers. After a disc jockey mentioned the story on his show, the rumor spread worldwide. McCartney was alleged to have died in a car crash, as profiled in "A Day in the Life", and William Campbell, who had won a McCartney lookalike contest, took his place.

Some sources list his name as William "Shears" Campbell, which would fit with the Billy Shears mentioned on the "Sgt. Pepper" album. McCartney, however, emphatically denied that he died in the 1960s.
5. So many conspiracy theories surrounded the death of this leader that it perhaps wasn't surprising that a story arose that his assassin was actually a Soviet-provided body double. Which leader was it?

The "Lee Harvey Oswald was impersonated" theory was based on inconsistencies about the man, including the fact that he had been placed by eyewitnesses at different locations at the same time. Even FBI records noted that the possibility existed that there were two Oswalds.

The theory emerged shortly after the 1963 death of Kennedy, and although it is largely ignored by historians, it still pops up in conspiracy literature.
6. The Bisley Boy was another alleged impersonator. Whose place was he rumored to have taken?

The story goes that Queen Elizabeth I died in childhood and was replaced with a local boy from the town of Bisley, when no suitable girl could be found. This would explain her failure to marry, her baldness and her insistence that no autopsy be performed when she died.

The rumor allegedly began in the 1800s when a vicar discovered a coffin of a young girl dressed in Tudor clothing at the hunting lodge used by King Henry VIII. However, Bram Stoker (of "Dracula" fame) wrote in his book on famous imposters that the story had its origins in the 1500s.
7. Michael Clayton's resemblance to this comedian was so convincing that Clayton allegedly claimed to be him. Which master of improvisation was it?

Celebrity impersonator, Michael Clayton, was a dead ringer for Robin Williams. So great was the similarity, that he allegedly held himself out to be Williams, which resulted in very large booking fees. In 2005, Williams sued Clayton and agent Michael Pool to cease the scam. Both Clayton and Pool blamed each other but agreed not to claim that Clayton was Williams in the future.
8. This dictator was alleged to have several body doubles, one of whom was murdered in 1945 to give the impression that the leader was dead. Which dictator was it?

Gustav Weler (or Weber, depending on the source) was the unlucky man whose resemblance to Hitler earned him a death sentence. It apparently had been hoped that the discovery of the body by the Russians in Berlin would end the search for Hitler. Some sources believed that this allowed Hitler to escape, while other sources listed the objective as preventing Hitler's actual remains from being discovered.
9. These actors bore such a resemblance to each other that they reportedly had coffee mugs with each other's name on them. Which actors were they?

Hoffman and Pacino apparently have had a good sense of humor regarding the resemblance. When asked about making a movie of his life, Pacino joked that "it would be called The Dustin Hoffman Story", and when asked what people say to him when they see him on the street, Hoffman said "Al Pacino!"
10. The story of this man's body double was so famous that it was made into a movie, "I was Monty's Double". Which Monty was it?

M.E. Clifton James had been recruited by David Niven during World War II to impersonate Field Marshall Bernard "Monty" Montgomery prior to D-Day. The purpose was to spread a misinformation campaign to divert enemy troops to southern France, away from the true Allied operation. Clifton James later starred in the movie of his adventure, playing both himself and Montgomery.
Source: Author PDAZ 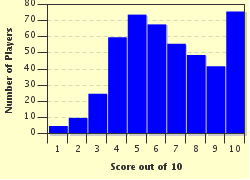 Related Quizzes
This quiz is part of series Commission #5:

Back to the basics-- it's a real mixture of titles from this fifth Quiz Commission in the Author Lounge from November 2009.


1. Italia 90: Luck of the Irish Average
2. 'Me and My Baby' Average
3. Better Living Through Chemistry Average
4. You Complete Me Average
5. Diary of a Somebody Tough
6. Mind Over Matter Easier
7. Blue is the Color Easier
8. How Many Men Does It Take? Tough
9. Seasoned With Salt Average
10. Ghostwriters In the Sky Average
11. The Chair Gang Average
12. Tree, bark! Difficult